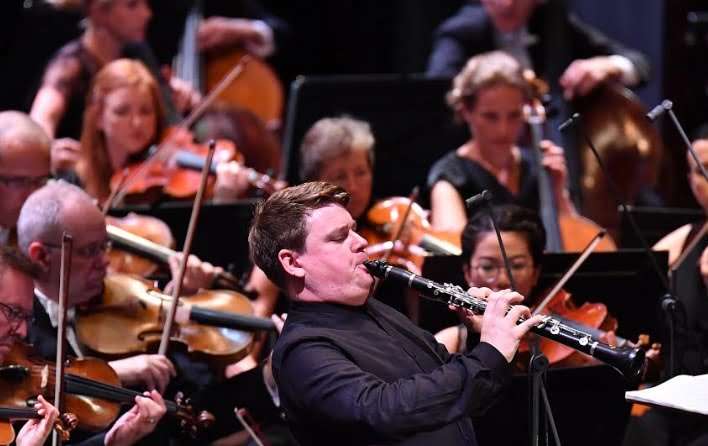 Magnus Lindberg’s Clarinet Concerto, written for Kari Kriikku in 2002 (he gave its Proms premiere five years later, under Semyon Bychkov), is one of those masterworks that transcends place and period. It’s not afraid to put the soloist in positions of extreme musical, virtuosic and ensemble demand. It fearlessly pits the single-reed of the instrument against the full panoply and battery of a symphony orchestra, no quarter given. It weaves memories, fragments and intervals into haunting melody (Respighi here and there coming to mind). Deep ground-tones turn into polarised axis points, seemingly random pitches gravitating towards scales and keys – nowhere more dramatically than in the “full solar glory” of B-flat (Stephen Johnson’s appellation) at the final climax, an Alpine Symphony ‘Sunrise’ moment of exploding cathartic release. At twenty-six minutes, Mark Simpson’s death-defying performance went for the jugular and the stratospheric. Nothing was moderated, from murmurs to elation to extended techniques. His interplay with the first-clarinet chair (John Bradbury), his cadenzas, his range of dynamics and timbres, now sweet now piercing, his ability to ride the biggest tuttis, delivery perfect, not a note stretched or cracked, his tension building, ran the gamut from poetry to pulverisation. Framing and offsetting it all, Juanjo Mena held the structure grandly, the BBC Philharmonic backing, sparring and punching its weight at every turn: edge-of-seat stuff. Simpson’s feather-from-nowhere encore was a Capricornid dreamscape of improvisational/un-barred Balkan-Caucasian-Arabic-Klezmer fusion – Patrick Nunn’s Eid Milaad Saeed, written for the fiftieth-birthday of Gary Carpenter, his former composition tutor at the Welsh College of Music and Drama. Magically nuanced. 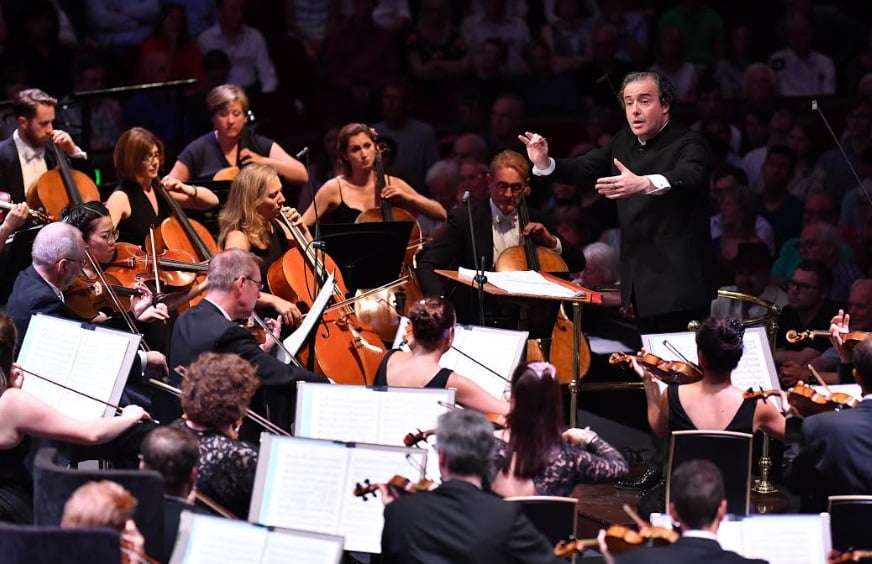 Shostakovich’s ‘Leningrad’ Symphony opened with a sense of hard rhythms and shaped solos. But, careful as Mena was to steer a straight, serious course, it didn’t quite gel. Maybe his carefulness, his concern to craft fine balances and beautiful cadences, his prolongations of time and ‘speech’, was the problem. The way the ‘invasion’ theme crept it, some notes audible, others carried away on autumnal winds, was effective. But the same sort of delivery in the third movement, cellos and double basses on the verge of audibility, and pages of hushed softness in the Finale, risked turning the idea into mannerism. I found myself wanting a little more roughness, some bite. Being too much of a gentleman in this music doesn’t do it any favours. Notwithstanding a characterful orchestral contribution – even if the mounting side-drum crescendo of the ‘invasion’ chapter was ever so slightly ahead of the beat – the sum impression of this seventy-minute reading was patchy, raising more than laying old ghosts, best in the fast set-pieces but, linguistically, too perfumed and contrived elsewhere to satisfyingly convince. The audience, clapping disruptively between movements, grew fidgety.