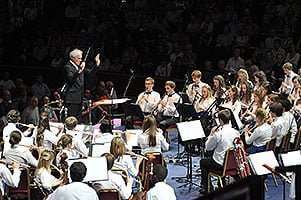 The Proms mini-season focussing on the nation’s youth orchestras and ensembles culminated with a judiciously planned matinee double-bill which provided showcases of equal effectiveness for the wind orchestra and the brass band, and in music which provided an overview of their respective repertoires through reinforcing and confounding expectations in equal measure.

The National Youth Wind Orchestra of Great Britain took the concert’s first half which opened with the genial vigour of Vaughan Williams’s Flourish for Wind (1937), continuing with a staple of the wind-band repertoire in Holst’s Second Suite (1911). James Gourlay summoned forth the right energy in the opening ‘March’ then brought winsome delicacy to ‘Song Without Words’ and brusque humour to ‘Song of the Blacksmith’ (one wonders, even so, whether these brief numbers might not have been more effective combined into one piece, the latter serving as the trio of the former), before despatching ‘Fantasia on the Dargason’ with an equal emphasis on its formal ingenuity and its expressive immediacy.

The first of the concert’s two BBC commissions followed with Der Aufstand (2012) by Gavin Higgins, who has already made a name for himself in the wind- and brass-band domains. Its title translating as ‘Riot’, this was inspired by the civil unrest that swept across English cities last summer – encapsulated in the stark initial chords (redolent of those that begin Britten’s Sinfonia da Requiem) and dogged processional that leads on to a frantic toccata and brief moment of reflection (clarinets placed evocatively high above the performing area) before a brutal signing-off. All highly dramatic and doubtless sincere, but the lack of an underlying framework meant that its eleven minutes were little more than a series of gestures in search of a context.

After this, Martin Ellerby’s Paris Sketches (1994) might have seemed too modest in comparison, yet these ‘Homages for Wind Band’ offer an enjoyable detour through the cities suburbs and related musical culture – thus the Ravelian poise of ‘Saint Germain-des-Près’, Stravinskian incisiveness of ‘Pigalle’, Satie-esque plaintiveness of ‘Père Lachaise’ and Berliozian grandeur of ‘Les Halles’. That said, the qualitative difference was only too evident when William Walton’s Crown Imperial (1937) proceeded to end the first half: heard in the idiomatic transcription by W. J. Duthoit, its surging vigour inspired a suitably committed response from the musicians – the Royal Albert Hall organ adding its thrilling presence in the climactic closing bars. 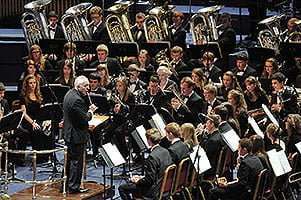 If the Wind Band has long enjoyed a greater profile in the US than in the UK, the Brass Band is as native to these shores as any music could be and its latter-day resurgence is the more gratifying. It helps that the latter’s repertoire has expanded out of all recognition – which should not preclude the revival of such unassuming yet appealing works as Chorale and Variations (1968) by Leighton Lucas. Barely remembered now for his copious film and light music, Lucas was evidently a master of his craft – for all that this sequence of respectively Italian, Spanish, Polish, French and Russian Variations make rather less of the majestic sarabande-like Theme than might have been expected.

No-one could accuse John Pickard’s music of failing to seize the moment, and Wildfire (1991) is no exception. This first work for the medium, and latterly the second movement of his hour-long yet impressively sustained Gaia Symphony, it proceeds from darting antiphonal exchanges between the sections which – as with the walls of flame from the forest fire that provided inspiration – gradually coalesce in a remorseless though hardly predictable accumulation of energy toward the conflagration with which the piece ends. A real challenge for any brass group, to hear it rendered so convincingly and with such panache by one whose members range between 12 and 18 was very gratifying.

A measure of calm was provided by the second new commission. In part an offshoot of a ballet concerning mythical connotations, After the Underworlds (2012) finds Gavin Bryars in his most ruminative and inward mode – the piece unfolding from cortège-like adagio to barcarolle-like andante, with due emphasis on instruments from the lower and bass registers (not least flugelhorn and tenor horn) in music whose atmospheric remoteness does not make for a lack of textural variety or motivic ingenuity. This latter aspect could have been developed appreciably beyond the work’s nine-minute span – making one hope Bryars might yet expand or elaborate on his existing conception.

How interesting it would be, too, were George Benjamin to revisit a medium that he handled so imaginatively when a teenager. With its fluid evolution and a distinctively ‘orchestral’ scoring, the virtues of Altitude (1977) are undoubted – Bramwell Tovey directing a tensile account that made a productive contrast with Blitz (1980): if not the most expansive among Derek Bourgeois’s numerous works for brass band, this is certainly the most enduring as it moves impulsively from lament, via scherzo, to a peroration that realises the potency of its explosive initial bars. A test-piece having long outlived its function, it was accorded a suitably uninhibited treatment here.

A pity, then, that that house was rather less than full – the Arena and Gallery being particularly sparsely occupied. Odd that the punters should turn up in such numbers for Jazz and World Music, while giving that for Wind and Brass bands the brush off, as more cohesive programming along with finer musicianship would be hard to find all season.