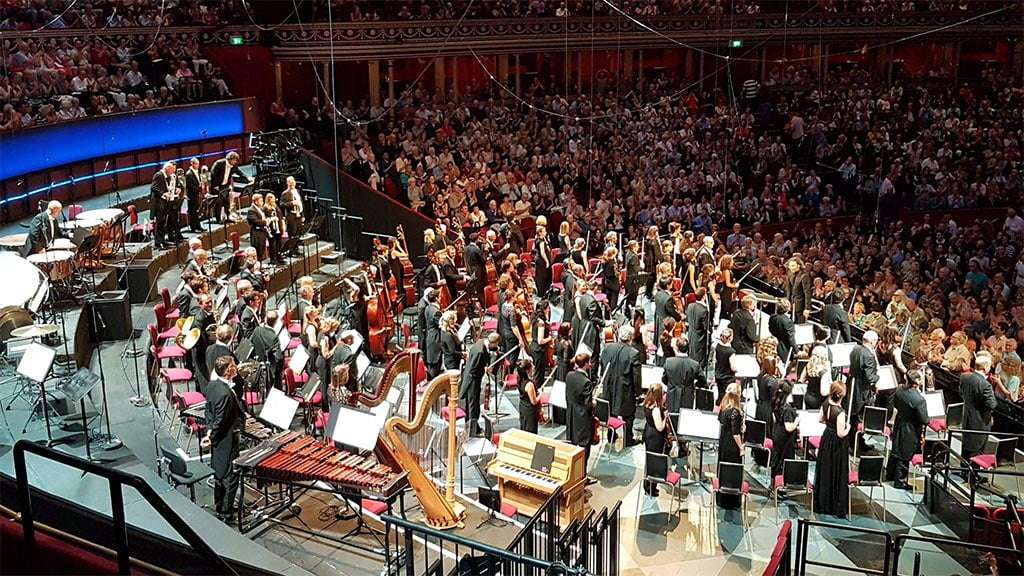 Perhaps only at the Proms could this curiously low-key programme attract a near-capacity crowd. Audience members were reasonably attentive too, even if the erratic occurrence of inter-movement applause belied the claims of those who discern anything real or spontaneous about it. The glittering Scherzo of Glazunov’s Fifth Symphony, the one tranche of music that might have been expected to garner instant approbation (recalling the days when individual movements were encored in response), was met with silence. No matter.

The London Philharmonic played superbly throughout, neat and well-drilled but also surpassingly eloquent in so far as the repertoire allowed. Vladimir Jurowski, on his best form in this kind of repertoire, drew some Soviet-era sounds from his antiphonally placed violins, characterful woodwinds and suitably hefty brass. There were three harps in the Rimsky and five players on percussion, tuned and untuned.

The fairytale atmosphere was established from the outset with the Mlada Suite, a score with a complicated history. Its parent work began life as a composite venture (q.v. Pictured Within: Birthday Variations for M. C. B.) but what eventually emerged was an opera-ballet by Rimsky-Korsakov alone. There are two authorised Suites, one closely following the music of Act Three, aka ‘Night on Mount Triglav’, the other the music as presented here.

This definitive five-movement Suite (1903) was represented on eight occasions between 1919 and 1935 but as early as 1898 Proms founder-conductor Henry Wood premiered a Mlada selection of some kind during his winter season at the Queen’s Hall. The Musical Times was, as usual, sniffy: “No finer playing could be desired … But for the rest, what can be said in favour of this music, so barren in melodic interest and artistic workmanship? It leaves us utterly unmoved, and all too soon we grow weary of the gorgeous apparel in which its pretty, harmless little ideas are dressed. There are those, no doubt, who admire such music…” Is this fair? Jurowski, who had chosen or been persuaded to present a programme in which everything had some sort of Wood connection, made the strongest possible case for a ripely-scored divertissement-style package. After the wanly post-Wagnerian introduction we were treated to a sequence of national dances, Bohemian, Lithuanian and Indian (the latter in the expected Scheherazade vein), leading to the brazenly Russian ‘Procession of the Nobles’, the only element even vaguely familiar in 2019. Not great music but great fun.

Rachmaninov’s First Piano Concerto received its British premiere at the Proms under Wood in 1900. Was this the world premiere as sometimes claimed? We know the young pianist-composer himself played only its first movement in unrevised form. Wood’s soloist was Evelyn Suart (latterly Lady Harcourt, eventually mother-in-law to Yehudi Menuhin). The pianist here was Alexander Ghindin, a serial champion of Rachmaninov’s original text which he recorded commercially some years ago with Vladimir Ashkenazy and played at the Royal Festival Hall in 2014 with Jurowski and the LPO.

While modern performances of the classics grow faster and daintier it has also been fashionable to extend running times by opening up cuts and revivifying discarded drafts. In this Proms season that has featured the UK premiere of the original version of Sibelius’s Fifth, there was arguably less reason to revisit the student Rachmaninov. That the composer was stylistically in thrall to Tchaikovsky goes without saying but the unrevised score’s additional reliance on Grieg’s Piano Concerto both thematically and structurally can be disconcerting. Instructive though to discover what was subsequently left out! With Ghindin not the kind of pianist to sell the music with an excess of barnstorming bravura, balance issues were resolved with apparent ease, the accompaniment tactful as well as nicely shaped. Notwithstanding his relatively circumspect style, we were rewarded with a torrential encore, the taxing E-minor fourth piece of Rachmaninov’s Moment musicaux, Opus 16.

Following the interval, Liadov’s gems, all given UK premieres at the Proms by Wood, were polished to perfection, pay-offs acutely timed. Two out of the three had been given to a far smaller gathering during the LPO’s 2017-18 Southbank Centre season when the final work was the 1911 Stravinsky Petrushka. The following year the LPO and Jurowski presented Stravinsky’s Opus 1 E-flat Symphony.

Glazunov’s Fifth is a mature work, often considered his finest in the form but, in truth, not intrinsically much more attractive, apart from that dazzling second movement. Even Wood only featured the Fifth once at the Proms, in 1897 when he appears to have conducted only the Scherzo. He had directed the reportedly “very finely played” UK premiere of the whole work the previous January at a Saturday-afternoon concert promoted, like the Proms themselves, by Robert Newman. As with the Symphonies Miaskovsky started writing a generation later, the ideas sometimes seem to lack personality for all the skill involved in their working out. Jurowski eschewed some of the grandeur of Gennadi Rozhdestvensky’s recorded interpretation, the introduction breezier, the Finale avoiding a surfeit of pomp in favour of precise articulation and sunny high spirits. As throughout the evening the piccolo and tuned percussion were kept uncommonly busy, brilliant orchestration helping to disguise any less compelling aspects of the invention.

A rather lovely concert reminding us what we may lose when its conductor moves on. 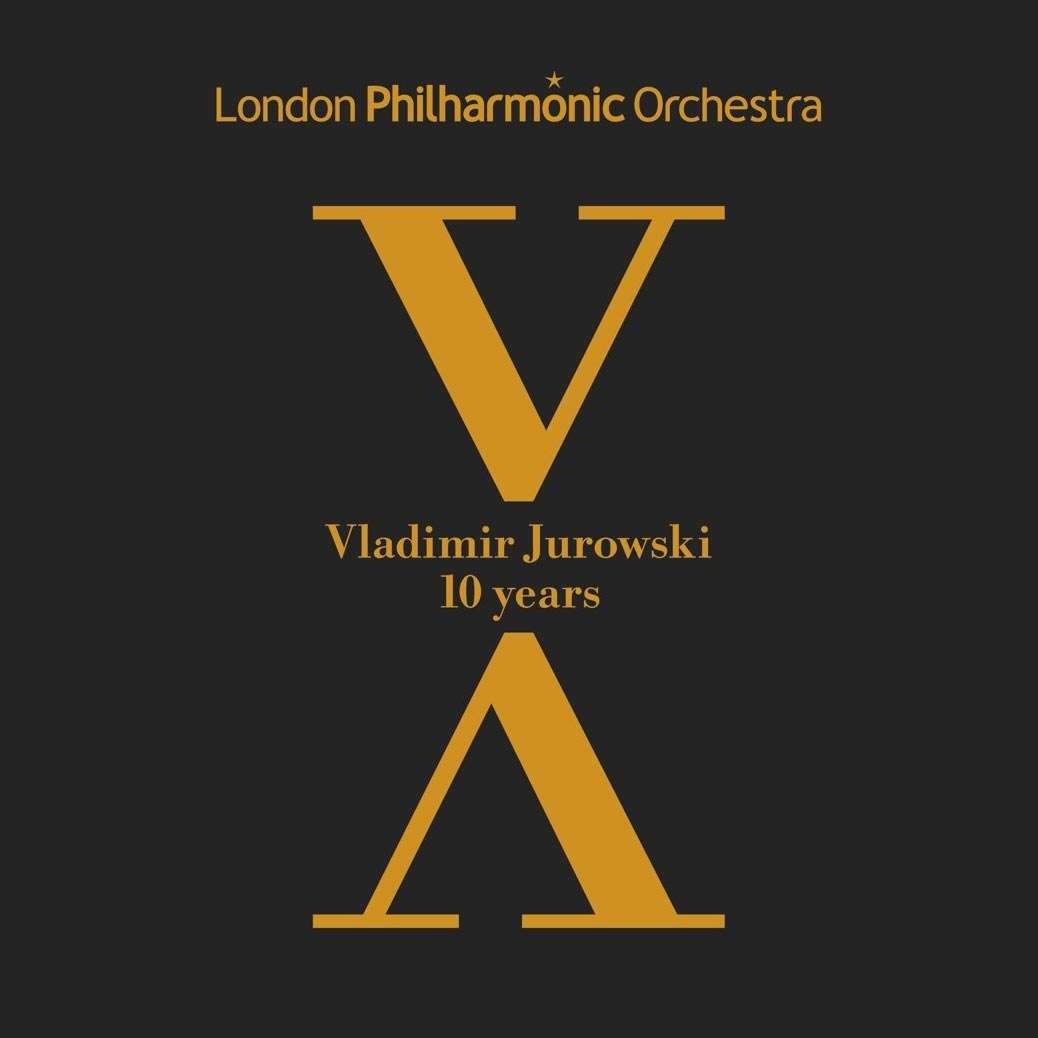 Colin Anderson writes… As a postscript and also a complement to David’s Prom review, I would like to mention a release from the London Philharmonic that marked ten years (since 2007) of Vladimir Jurowski’s Principal Conductorship of the Orchestra.

Recorded during this cited decade, mostly at the Royal Festival Hall, the big works include Ravel’s Daphnis et Chloé (complete, with much to admire in Jurowski’s conducting of it, if with the unfortunate addition of some fake reverb, so as to make the RFH sound not-quite-like-itself, neither in acoustic stamp nor a consistent perspective), Enescu’s fascinating fifty-minute Third Symphony (a listen-again-and-again piece), Brahms’s German Requiem, Szymanowski’s ‘Song of the Night’ (i.e. his Symphony 3, a revelation here) and Liszt’s Faust Symphony (the latter from an Albert Hall Prom). At least those latter four selections escape the misguided treatment that afflicts Daphnis, as, thankfully, do most other choices here.

“Vladimir Jurowski 10 years” is a generous set, seven well-packed CDs, including contemporary scores (a testimony to Jurowski’s adventurousness), embracing such as Ligeti (his suspense-filled Atmosphères, as purloined by Kubrick for 2001), Kancheli and Silvestrov, and from which the standout (for me, venerable Ligeti aside) is the Second Symphony of Edison Denisov (its first recording), a wholly compelling masterwork.

The collection is cued by a Fanfare, the bracing one heralding Paul Dukas’s La Péri – an impressionistic masterpiece by one of the most self-critical composers – the LPO at its brassiest and most-shimmering. [LPO-1010; 7 CDs; 8 hours 45 minutes ★★★★/★★★★★]