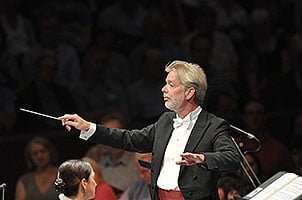 The Proms triple-whammy over the weekend of choral blockbusters was rounded off by Schoenberg’s vastly scored Gurrelieder (or, as printed on the title page, “Gurre-Lieder”), one of the deepest exhalations of late-Romantic opulence.

When Schoenberg started it (in 1900), his music was drenched in Wagner, and not just in terms of style – Gurrelieder is just as powerful a vehicle for passions dark and death-inflected and redemptive release from earthly cares. The story of King Waldemar’s love for Tove, whose release from worldly worries (that is, her murder) is arranged by his wife – has an obvious link with Tristan und Isolde (although even modestly informed Wagnerians will discern influences from most of the operas). 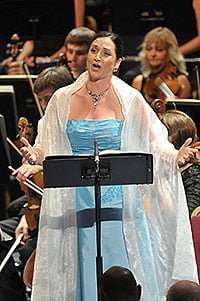 By the time Schoenberg completed it (in 1911), he had moved on musically, and one of this performance’s many strengths was Jukka-Pekka Saraste’s detailed recognition of this development. He also kept Gurrelieder boiling between song-cycle, cantata (with more than a nod to Mahler‘s Das klagende Lied) and opera, a balancing act very much honoured by the vocal soloists. 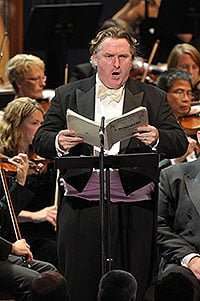 As Waldemar, Simon O’Neill rose heroically to the task of the work’s anchorman, but even his Heldentenor didn’t stand much of a chance when the orchestra was at full tilt, and his careful husbanding of resources was at odds with ideas of unbridled ardour and, later, rage when he berates God for allowing Tove‘s death. The exhilarating top of his voice often sounded raw, and his lower range sometimes was obliterated. It’s a near-impossible task, but when he hit his stride, particularly his closing song of Part One, ‘Du wunderlicher Tove’, he had the measure of the work’s overheated, hyper-inflated passion.

Angela Denoke’s Tove flowed more consistently, and her easy dramatic presence and gleaming soprano summed up the lovers’ yielding to ‘Liebestod’ oblivion. Denoke was wonderful, and if O’Neill had matched her emotional range, the result would have been shattering. As it happened, Katarina Karnéus, as the Wood-Dove, clinched the first part’s doom-laden atmosphere with her eviscerating account of Tove’s death. 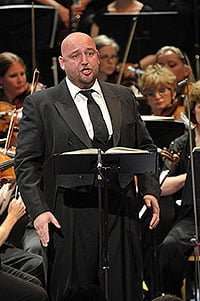 The Peasant and Klaus the Fool were respectively sung for all their-near-operatic worth by Neal Davies and Jeffrey Lloyd-Roberts, both with natural feel for their roles’ quasi-Shakespearian light relief and post-romantic dramatic contrast. Wolfgang Schöne, whose career is almost exclusively centred on Wagner and beyond, was the excellent Speaker, his Sprechstimme lightly in touch with pitch and turning to song to great effect, and impressively on the cusp between oddity and ecstasy. My marginal preference is for a woman as Speaker, mainly because the voice is likely to be more disembodied and because it points more succinctly to the ’new’ Schoenberg of Pierrot Lunaire.

Saraste (replacing Jiří Bělohlávek) is not the most overtly charismatic conductor, but his approach worked wonders with detail and clarity. The opening ‘Prelude’ hovered between the close of Verklärte Nacht, the ‘Fire Music’ from The Ring and Ravel’s diaphanous skein of orchestral effects in Daphnis et Chloé. Saraste deployed the huge orchestra with impressive fluency, all the more remarkable for not being an exercise in long-range micro-management. The orchestral sound breathed and glowed, and picked up the different styles – although the notorious chains clinked cheerfully rather than clanked woefully. The 300-strong combined choirs made every note of its relatively short contribution tell – Waldemar’s cohorts’ ghostly ride was memorably urgent and impetuous – and Saraste handled the sunrise finale with heart-stopping grandeur.

There was a rather long gap after Part One, with some noticeable filling in by the Radio 3 announcer and staff running around. Then a technician came on to raise the conductor’s stand, which Saraste promptly returned to its original level. It was nothing, though, compared to the persons in the box behind me having their dinner during the performance, with all the sound-effects that go with it – probably Schoenberg’s greatest success, at its 1913 premiere, reduced to Tafelmusik. Some people are just weird.