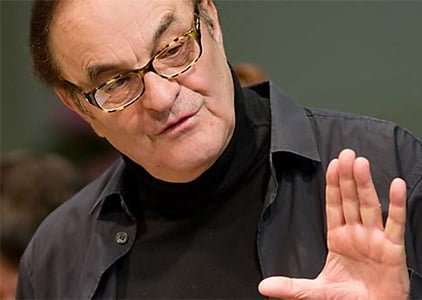 This year one of the BBC Proms themes is Polish music, and this concert marked the 80th-birthday of Krzysztof Penderecki, alongside more familiar Charles Dutoit repertoire. Stravinsky’s Fireworks was lithesome, colourful and to the point – all qualities that Penderecki’s Concerto Grosso does not possess.

Dutoit commissioned this work with the NHK Symphony Orchestra in 2001, and he gave the world premiere in Tokyo, but the music sounds far more dated, drawing heavily from Shostakovich and even Bruckner. Tim Rutherford-Johnson’s programme note was helpful, detailing the composer’s move to a neo-Romantic style of composition. Concerto Grosso No.1 – the Second is for five clarinets and orchestra – is definitely one of those works ‘harder to take’. Scored imaginatively enough, for three cellos and orchestra, it picks up on the renaissance of the form in the 20th-century through composers such as Bloch, Martinů and Schnittke. Yet whereas those composers retained melodic or sonic invention and brevity of structure as principal qualities, Penderecki opts for a six-movement, 35-minute monolith played without a break and with little variation in sound. There were attractive pockets of melody and sonority here and there, and the three soloists made a wonderful sound when blended together, but there was too little invention and variety. The more-effective episodes included stylish interventions from a ripieno of horn, oboe and xylophone, but such moments were few and far between as we became stuck in string-heavy quicksand.

The concert was redeemed by Dutoit’s conducting of La mer. ‘De l’aube à midi sur la mer’ was realised in high definition sound, with every little detail audible, right through to the climax points where the sea-spray fairly crashed around us. A lot of rehearsal time had clearly been spent here, with the strings – particularly the violins – operating as one and the brass choir immaculately drilled. Dutoit’s pacing was ideal, too, the RPO notably holding back in the opening exchanges but powering forward towards the end. ‘Jeux de vagues’ followed this blueprint closely, the softly brushed cymbal and glockenspiel a delight, while the surging surf of ‘Dialogue du vent et de la mer’ had us holding on to our hats.

The same qualities typified Daphnis et Chloé. ‘Lever du jour’, the wonderful evocation of the break of day, brought a relatively slow arrival of dawn, but Dutoit was fully in control of each phrase, the violins pulling out phrases of heart-stopping beauty, and Emer McDonough’s flute solos were a highlight in ‘Pantomime’, given over detailed pointing from pizzicato lower strings. The RPO played to a consistently high standard throughout the concert, responding to Dutoit’s sleights of hand with total involvement.