Dvořák
Symphony No.9 in E minor, Op.95 (From the New World)
Copland
Fanfare for the Common Man
Joan Tower
Fanfare for the Uncommon Woman, No.1
Villa-Lobos
Mômoprecóce
Ginastera
Estancia – Suite 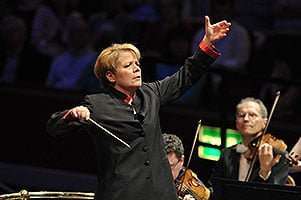 Maybe the Fanfares should have opened this ‘from the Americas’ Prom, a brassy male/female self-welcome to the São Paulo Symphony Orchestra. As it was the sullen opening bars of Dvořák’s ‘New World’ Symphony was the first music heard. There was some accomplished playing throughout this New York-composed work, the relatively young São Paulo Symphony Orchestra (founded in 1954) delivered its wares with sensitivity and relish, fully fired-up for appearing in the Royal Albert Hall. Marin Alsop’s conducting rather restricted the music’s potential, however, with a first movement that could have acquiesced more (it was too pushy and, normally no bad thing, lacked the exposition repeat, yet here that excision seemed parsimonious; she observes it on her Naxos recording from Baltimore). Following it was a Largo that was restless, the cor anglais solo just a little harried and tonally uneven. Alsop’s tight leash worked better in the scherzo but the trio needed more breathing space for the woodwinds to coo; and the finale also needed greater flexibility. On the positive side, attention to phrasing, detail and dynamics were admirable, and if the SPSO is not the most homogeneous in sound across sections or within them, then something that differentiates a ‘new band in town’ is welcome, not least the woodwinds’ rusticity, the warm strings, mellow brass and a really excellent timpanist.

If the performance was short on true distinction overall, it might have fared better had some in the audience not applauded the first three movements (which broke the symphony into four sound-bites). Also not helping was the tension-depleting long gap before the Largo due to hordes of latecomers being admitted, some clod-hopping to their seats and still finding them once the (quiet) music was underway, and during which two mobiles went off. 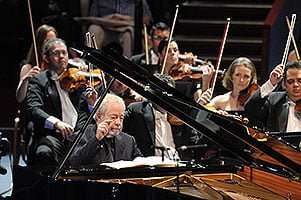 Aaron Copland’s Fanfare for the Common Man opened part two of this Prom; superbly brought off, beautifully balanced, perfectly and stirringly paced, and with some notably seamless trumpets. Joan Tower’s distaff response (1986), the first of to-date five such works, is unlikely to become as iconic as Copland’s example (even though it apes its opening percussive gesture), but has its own velocity and punch.

Brazil’s very own Heitor Villa-Lobos (1887-1959) featured next. The composer of some 350 works (quite a few on a very ambitious scale), one shouldn’t doubt his fecundity of ideas or his use of an expanded colour chart. Mômoprecóce (1929) is weird and wacky, loose-limbed and open-ended, but full of rain-forest and siesta delights. This Carnival-Jest (not from Vienna!) is full of tropical twists and turns, the economical orchestra sounding bigger than it is (only five brass, for instance, although Villa-Lobos does allow himself a saxophone and a good drizzling of Latin-American percussion). 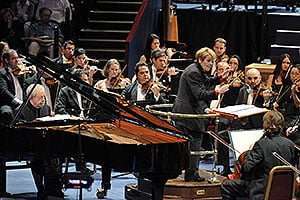 Music for occasional listening (lasting 20 minutes, rather shorter than stated), and with some lovely lyrical writing along the way, this was a happily ‘native’ rendition, aided by the luxury casting of (equally native) Nelson Freire for the obbligato piano part; super-virtuoso he may be, but he is always a musician first and it’s difficult to imagine a more compatible yet tasteful contribution than his.

The Suite from Alberto Ginastera’s ballet Estancia (1941) took us to Argentina (composer and story indigenous). Short in time the four movements might total to (the first three not applauded but concluding to blissful silence), but the repetitions of the repetitions of the post-Rite rhythms do take some tolerance (for all Ginastera’s sophisticated scoring and notation). Only ‘La mañana – Danza del trigo’ (Morning – Dance of the Wheat) offers charm; if it’s possible to have a lullaby to greet the sunrise, then this is it. The precision and enthusiasm of the performance were splendid, but the music’s remorselessness was put in its place by the back-to-Brazil encore, a dance by Eduardo de Góes ‘Edu’ Lobo that had no lack of variety. Great fun! The São Paulo Symphony Orchestra and its new Principal Conductor certainly made a vibrant contribution to this year’s Proms season.