Schoenberg
Gurrelieder – in three parts for solo voices, chorus and orchestra to a text from Gurresange by Jens Peter Jacobsen in the German translation byRobert Franz Arnold [sung in German] 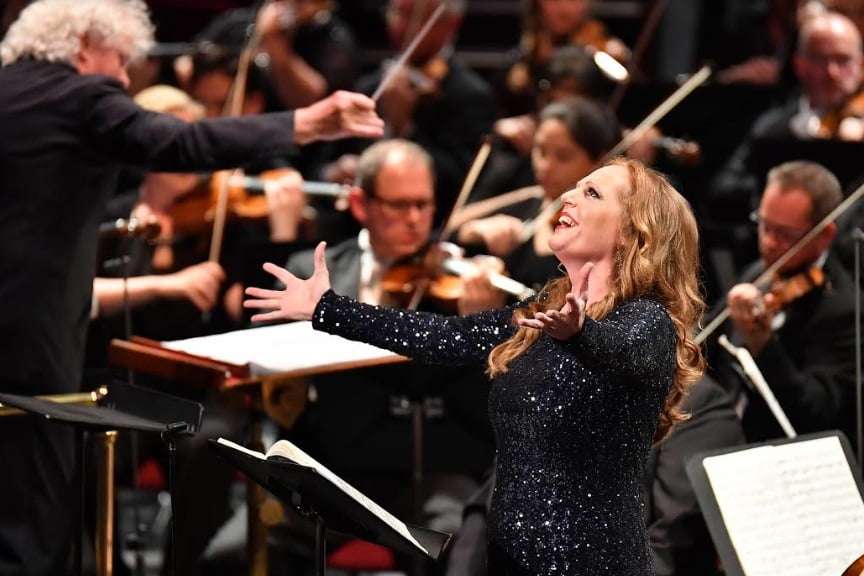 What is it about doomed lovers and the inexorable progress towards a New Music? First Tristan und Isolde, then Pelléas et Mélisande, and, almost as though he wanted to have the last word, the young Arnold Schoenberg, music’s saviour from the straitjacket of tonality (or so he thought then), slapped down his late-romantic credentials with Gurrelieder, about Waldemar and Tove’s forbidden love, Tove’s death at the hands of Waldemar’s jealous wife, Waldemar’s cursing God for allowing such a tragedy and his being condemned to ride the land with his spectre-vassals until the whole gothic contraption is subsumed into a glorious sunrise.

Phew, what a scorcher – and romanticism’s last, long exhalation has been raising the Royal Albert Hall’s rafters fairly frequently over the past half-century; my first Gurrelieder was with Jessye Norman unforgettable as an orchestra-surfing Tove. It’s a work Simon Rattle has championed throughout his career, and you can see why. It plays to all his conducting strengths in terms of drama and its open-ended potential, and it takes him well and truly into his comfort zones. 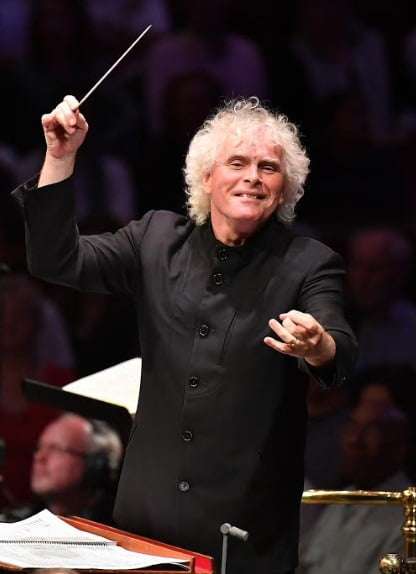 The sheer scale of Schoenberg’s dramatic setting may seem daunting – a vast orchestra with, for this Prom, the LSO muscled up with twelve double basses, Wagner tubas, multiple woodwinds and brass and those notorious chains, six soloists including a Pierrot Lunaire-anticipating Sprechgesang role and a mighty male chorus taking to its hellish steeds – but, while Rattle is not afraid to let rip he is just as keen on releasing the score’s detail and translucence.

Gurrelieder is certainly one of German romanticism’s most-extreme offspring, but Rattle channels Schoenberg’s exuberant scoring through a French-style impressionist sensibility. He and the LSO were spot-on in tracking the changes in the composer’s style in a work that took a decade (1900-10) to complete, resulting in a beginning that sounds very different from its end. It’s a compelling mix of style coming up against taste, and Rattle and his orchestra-in-waiting – he assumes the LSO’s music directorship next month – pulled it off with astonishing panache, in a way that was, importantly, hugely supportive of the singers, mainly because his preference for nuance and separation of texture over orchestral bulk gave the über-expressive Germanic vocal lines a chance to make their mark. Even so, it is Wagner’s presence that looms largest, with due deference to the Mahler of Das klagende Lied, and there are rich pickings to be heard from Lohengrin, Die Walküre and the torment of Parsifal cleverly absorbed into Schoenberg’s constantly overheating opera-oratorio, nature-worshipping tone-poem hybrid. Rattle relished but never traduced its extravagance.

There is nowhere to hide for Waldemar. Not only is he present for all three parts – and leading the first two – and the vocal line is punishingly high. Simon O’Neill gave his heldentenor its all both musically and as the regal essence of romantic agony. There were moments when even this consistent, superman tenor was pushed under by orchestral might, but his ardour was unassailable in passages such as ‘Du wunderliche Tove’. As the latter, Eva-Maria Westbroek was radiant and unashamedly operatic, piling on the eroticism as she and her lover get nearer to Tristan-like oblivion. Both singers’ alternating songs spared nothing as they raised the temperature of desire. Oddly, there is no lovers’ duet, but Jacobsen’s ballad-poem steps into the breach with the sort of burgeoning, even bulging sexual imagery that would keep a sex therapist in business for ever. When it’s all over for Tove, implied by a brooding interlude, Karen Cargill sang a hair-raising account of Tove’s death and funeral in the ‘Song of the Wood-Dove’, her sumptuous lower range bringing Part One to its tragic conclusion.

With Christopher Purves’s excellent Peasant describing the Wild Hunt, it was a relief to hear a male solo not straining for top notes, and together with Peter Hoare’s highly characterised Klaus the Fool they briefly eased the dramatic tension. Thomas Quasthoff (who was performing the role of the Peasant until he retired from singing in 2012) took the Speaker’s part. It was more Sprech than Gesang, articulate but frankly not loopy enough. It is much more effective taken by a woman – the composer approved either genders.

The other, very minor heavy-metal disappointment was the chains that are supposed to add an Edgar Allan Poe-like frisson to the Wild Hunt. When you could hear them it was more jingle than clank – I’ve heard them sounding like the contents of the cutlery drawer dropped onto a sheet of metal – but otherwise the sound was superlative, from the glittering, Ravelian opening supporting a thread of silvery trumpet, to the overwhelming volume of the Hunt to the decidedly post-romantic chamber forces delicately accompanying the Speaker, it was all done with immense conviction. As for the chorus, the men in the Hunt were tremendous and the sight of the full forces cupping their hands over their mouths for more volume in the final, unbelievably grand hymn capped the impact of this stupendous evening.