“The West–Eastern Divan Orchestra and Daniel Barenboim return for a colourful Spanish-flavoured evening. We begin just outside Seville in Mozart’s vivacious Figaro overture, before drifting into the dreamy Spanish nights of Ravel’s Rapsodie espagnole. Dreams give way to convulsing, urgent dance as we reach the Rapsodie’s latter movements – a preview of the rhythmic intensity of the composer’s Boléro. Also featuring here are two works newly composed for the orchestra – both exploring the musical junctions of East and West.” [BBC Proms website] 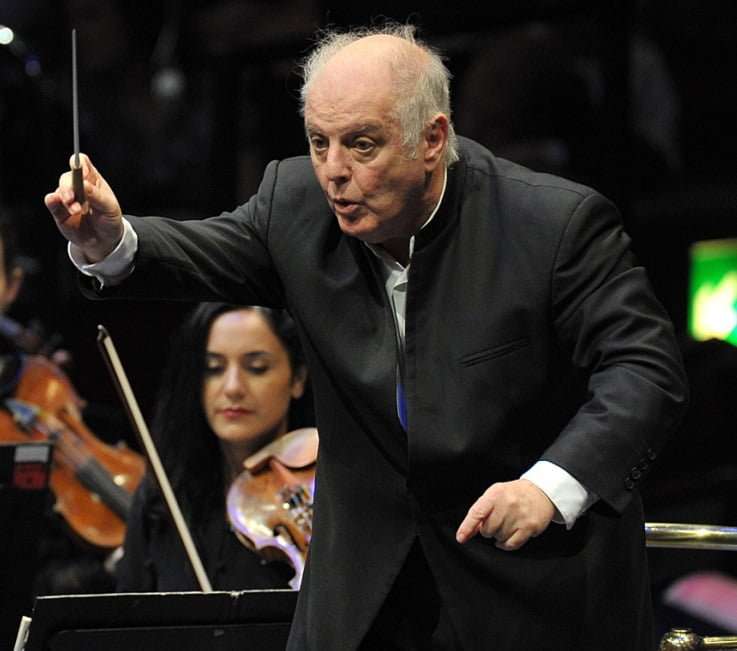 The West-Eastern Divan Orchestra dates back to 1999 as the brainchild of Daniel Barenboim and Edward Said. Mixing young musicians from Israel, Palestine and several other countries (including Spain), this is a first-class ensemble, full of youthful passion and enthusiasm, with a message for peace that could hardly be more relevant. The act of communal music-making, Barenboim and Said realised, breaks down all borders and ideological differences and one is left with a shared artistic goal.

The programming was rather curious, most specifically in the Mozart, a rather tacked-on idea that was nicely articulated. Yet the buffa element was largely missing. Despite being pared-down, the orchestra still seemed rather big-boned and old-fashioned (despite antiphonally-placed violins). More, the distance between this and the two pieces that followed was huge: a great chasm that did neither Mozart nor the young composers any favours. 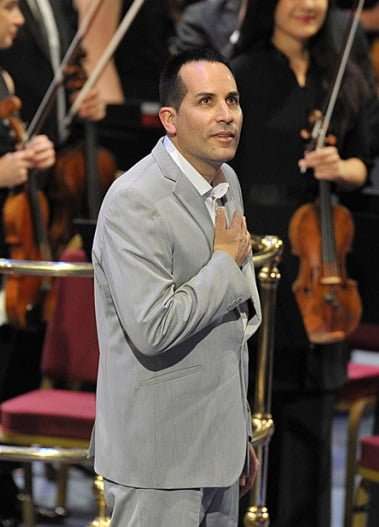 The first of the UK premieres at this Prom was Resonating Sounds (2014) by Israeli Ayal Adler, born in 1968. He studied at Jerusalem University and Jerusalem Rubin Academy of Music and Dance. Six percussionists add colour to the sounds of a large orchestra. The work lasts nine minutes and it is clear from the glacial clusters of the opening that we are in the presence of a composer whose aural imagination is vast. Adler’s technique is such that he can compose these sounds with remarkable accuracy: even the closest scored tutti was underpinned by a remarkable clarity (aided, no doubt, by Barenboim’s fine ear – one remembers his affinity with Boulez). Scampering, skittering passages were deftly given, yet one cannot live by texture alone, and as the work unfolded the nagging suspicion that there is little substance here became more and more the case.

Significantly more intriguing (and impressive) was Kareem Roustom’s Ramal (also from this year), a 12-minute piece that reflects on the violence in Syria. The title refers to a pre-Islamic metre in classical Arabic poetry. Differences of metrical play are used as the underlying basis for the work. Damascus-born, Syrian-American composer Roustom, born 1971, is settled in Boston, yet Syrian influences pervade his music. Recently he has been exploring the Syrian crisis via his compositions. Ramal is dedicated to the memory of Edward Said. The opening of Roustom’s piece could hardly be more contrasting to the Adler, exuding a parallel energy to the more-outgoing music of Leonard Bernstein. Yet Roustom defies categorisation. Long-breathed 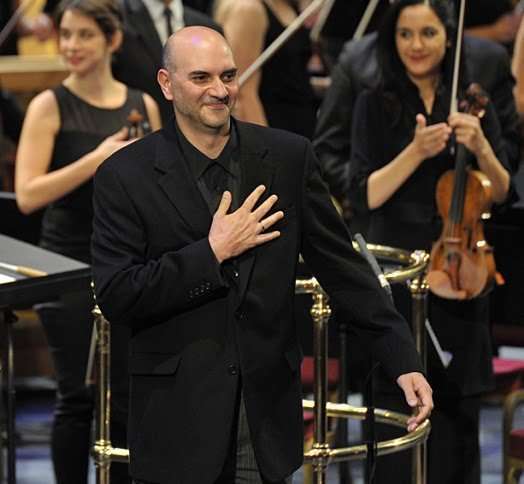 melodies vie with radiant harmonies before a suddenly dark Mussorgskian chord clouds the sound-picture. The music has a tendency to congeal into near-consonances, without ever emerging properly into the light. The whole experience was consistently fascinating.

In the second half, the Ravel sequence was played straight through, which Barenboim refers to as a “Spanish symphony”. He remained on the podium throughout. The first three movements of Rapsodie espagnole offered huge rewards, with particularly impressive contributions from the bassoons but again, as with the Mozart, it was the feeling of letting-go that was missing, here in the final ‘Feria’. To represent the scherzo of the “symphony”, Alborada del gracioso received a memorable performance, a reminder of Ravel’s dark side. A pity that the reading of the succeeding ‘slow’ Pavane pour une infante défunte did not quite enter the piece’s fragrant, dignified and rarefied world despite a superb horn solo. In the ever-famous Boléro, Barenboim opted not to conduct a good deal of it, trusting the inevitability of the crescendo – and the sense of ensemble – to his expert players. It was a fine performance, and encores were expected – and delivered: continuing the Spanish element seen through French eyes, the four movements of Suite No.1, mostly entr’actes, from Bizet’s Carmen (Barenboim taking to the Stalls for the Prelude to Act One, played last) followed by an Argentinean tango, ‘El firulete’.

No-one surely could have denied either the spirit of hope, the enthusiasm of youth or the sheer generosity of this concert. Barenboim is not one to do things by halves; his laser concentration and vast experience clearly inspires these players to their very finest.