“A celebration of nature in music, inspired by the bestselling book The Lost Words. The Proms features a specially written ‘spell’ by the book’s author Robert Macfarlane and live paintings from Jackie Morris.” [BBC Proms website] 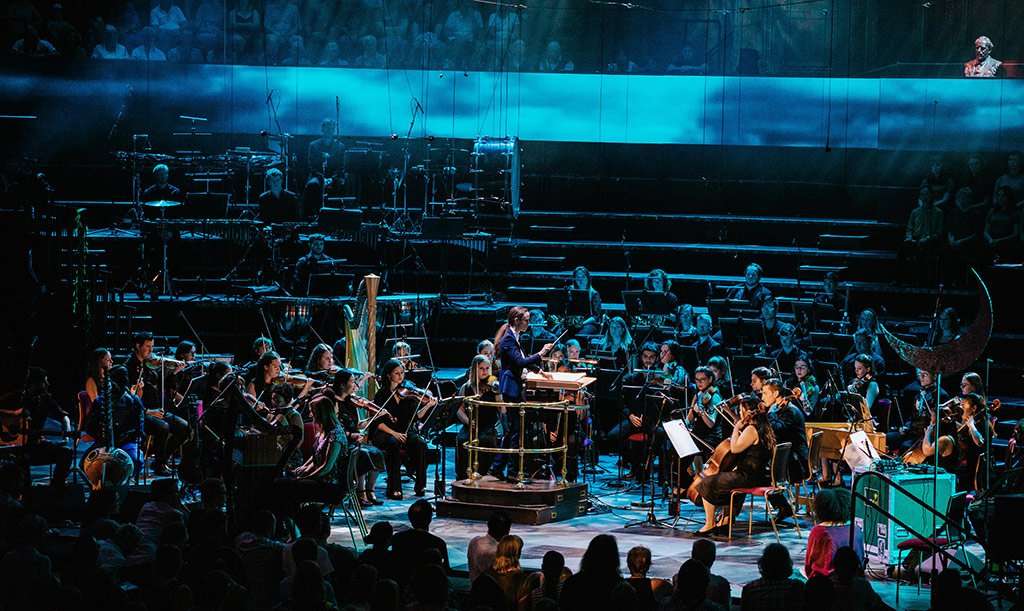 This season – marking the 150th-anniversary of the birth of the founder of the Proms – has celebrated Sir Henry Wood with a series of Novelties (pieces he introduced to the UK). None were included here but this concert will probably go down as a Proms Curiosity.

Based on Robert Macfarlane’s poems and Jackie Morris’s beautiful paintings as published in The Lost Words in 2017, and conceived by Serena Cross, this Prom recreated in sound nine of The Lost Words’ subjects and added new verse by Macfarlane, The Red Fox, set to music by Alissa Firsova. Woven through the programme were snatches of already composed pieces, which in the first half were all-too short. Ending with the birdsong bars of the slow movement of Beethoven’s ‘Pastoral’ Symphony, there had been two excerpts from Vivaldi’s ‘Goldfinch’ Concerto (standout moments for flautist Hugues Roberts), a snatch of Sally Beamish’s The Day Dawn, and, from John Luther Adams’s songbirdsongs, ‘Apple Blossom Round’.

Thankfully the second half served music much better, with complete movements from Rautavaara’s Cantus articus and the Finale from Vivaldi’s ‘Summer’ played with relish by young violinist (and conductor) Stephanie Childress, who also offered an excerpt from Vaughan Williams’s The Lark Ascending, even if Macfarlane’s words were spoken over the music by Indigo Griffiths as Diana – Griffiths entering through a sparsely populated Arena (the utterly perverse decision to not allow season-ticket holders into this Prom!). 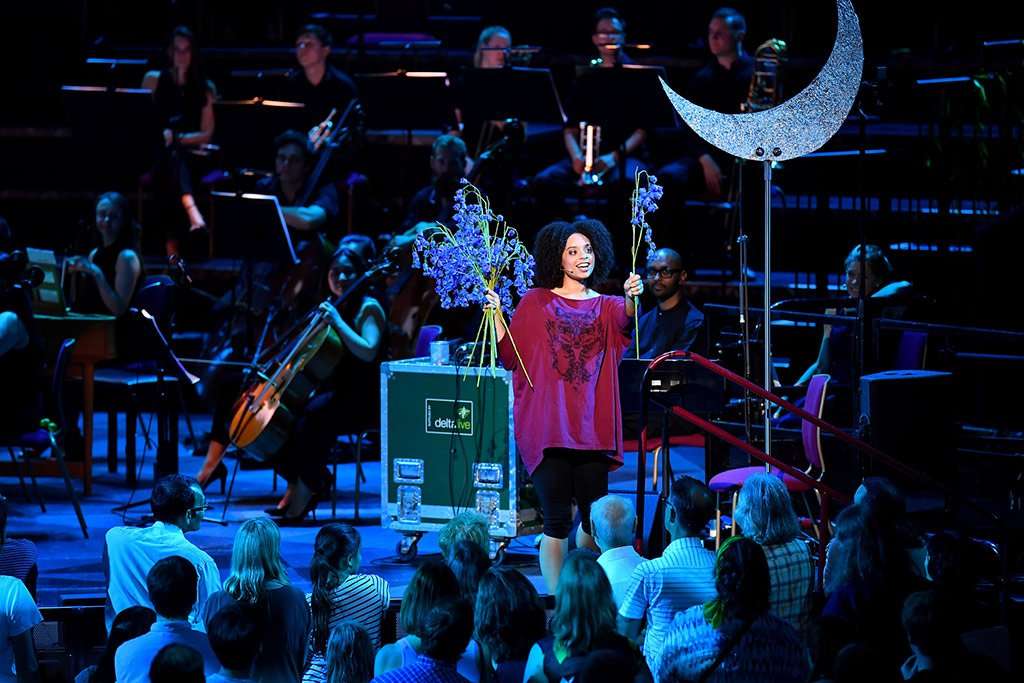 All of these were illustrated on screens high above the stage of Jackie Morris’s beautiful nature drawings. She was on hand, too, to do two live paintings – otters in the first half, accompanying folk group Spell Songs, and a red fox in the second. Less successful was the opening commission. Jocelyn Pook’s You Need to Listen to Us takes its text from teenage eco-warrior Greta Thunberg’s speech at the Strasbourg Convention and, Steve Reich-like (think Different Trains), picks out themes from the rhythm of her speech, sampled and played over the music. Given the crackly quality of the samples, it would have been much better to leave the words solely to the National Youth Chorus. It got proceedings off to a distinctly unedifying start and, while the sentiments were all good, this was very much the case of a cramming in one issue too many.

Best of all were the contributions of Spell Song. They accompanied Morris’s otter painting and The Lost Words Blessing, a paean, fashioned by the group from all Macfarlane’s spells, to humanity’s need for nature and a connection to our history through both endangered species and words, joined by the Southbank Sinfonia and the National Youth Chorus. That segued into another highlight, the recreation of a dawn chorus, where audience members were asked to download one of eight sound files recorded by Chris Watson and to play them when their respective birds – nightingale, skylark, song thrush, wood warbler, wren, pied flycatcher, cuckoo and yellowhammer – were invoked by Janie Dee. It proved to be a remarkably effective culmination to the concert that certainly engaged and energised the audience. Jennifer Cottis marshalled the Southbank Sinfonia and National Youth Choir forces with aplomb and kept the programme moving seamlessly. 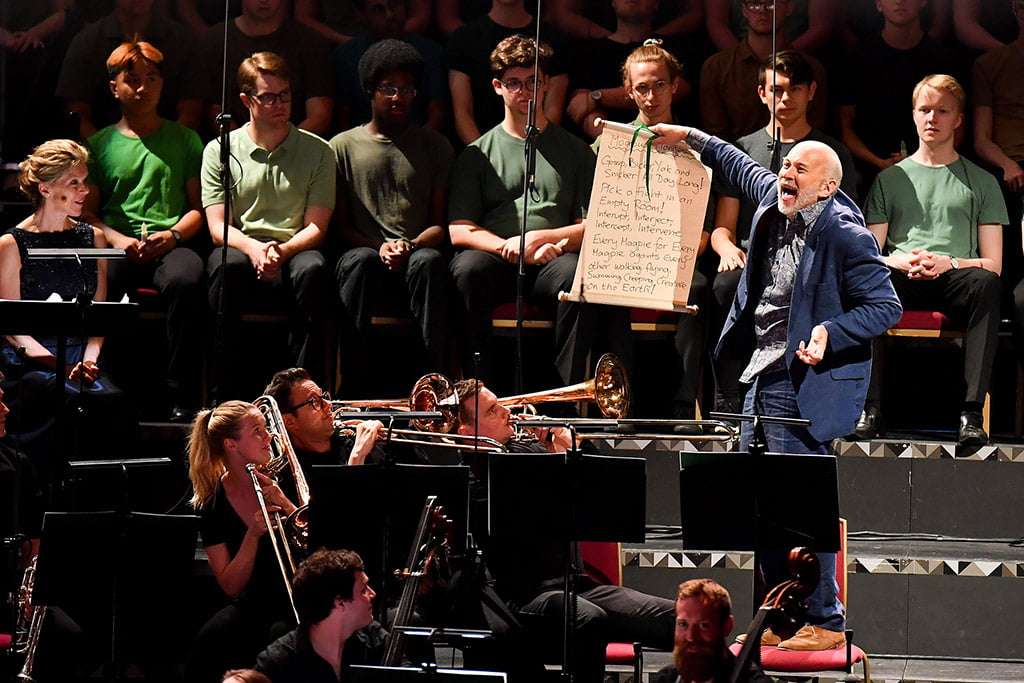 The other contributors included beatboxer Jason Singh, spoken-word artist Caleb Femi and dancer Thomas Carsley. Together they brought to life two black birds – the Raven and the Starling. Even if Carsley’s rubber-limbed contortions – a mixture of bird imitation and physical reaction to Macfarlane’s rhythms – were unable to emulate a murmuration of starlings the orchestra and chorus’s swaying to and fro helped create the impression.

Janie Dee and her fellow-actor Vincent Franklin were late additions to the line-up and not named in the programme. While Dee’s silkily smoky voice brought gravitas to some of the poems, Franklin had the more extrovert part, imitating the Magpie and the ponderousness of the heron.

But on the whole this was an enjoyable if slightly unfocused entertainment – which for the most part held the attention of the audience. While the new compositions were probably too ‘occasional’ for their own good, what shone through was the delight of word and image in the natural world.

Perhaps most curiously this was not a televised Prom – with the visual element of Morris’s paintings it would have worked well. Those attending have the best memento though; the full-colour programme book was bursting with images.