Mozart
Die Zauberflöte, K620 – Singspiel in two Acts to a libretto by Emanuel Schikaneder [semi-staged performance based on the Glyndebourne Festival production directed and designed by Andre Barbe & Renaud Doucet; sung in German, with English surtitles]

Orchestra of the Age of Enlightenment
Ryan Wigglesworth 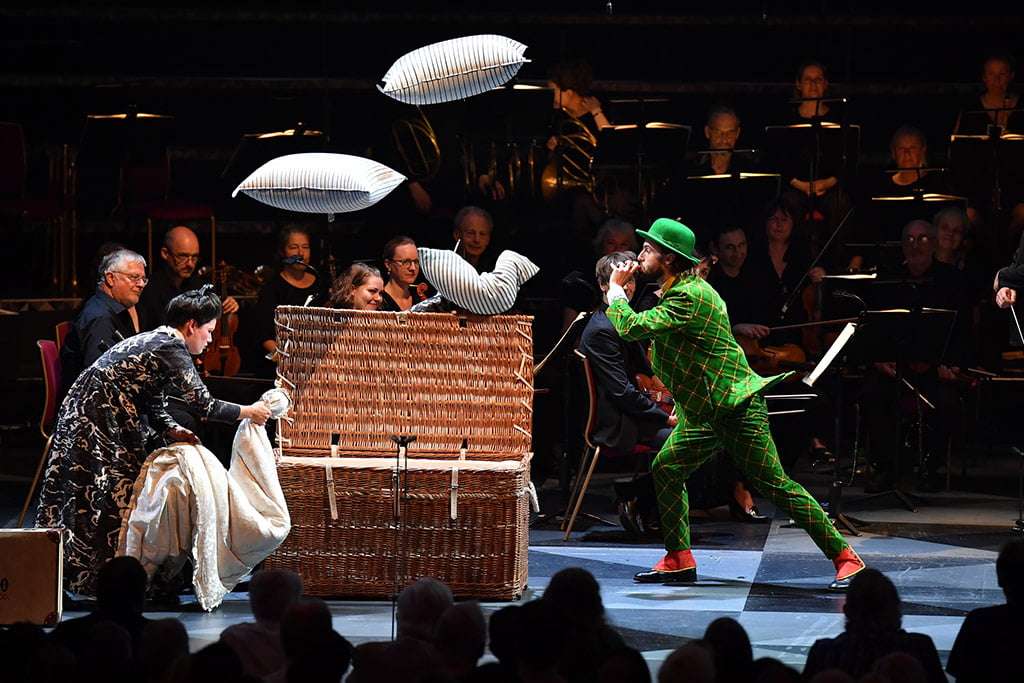 Try as one might, it’s difficult to see any meaningful connection between Mozart’s great opera of the Enlightenment, The Magic Flute, and the grand-hotel setting into which it is ignominiously thrust in Glyndebourne’s recent production, and brought to the Proms for the Festival’s annual appearance.

Apparently the inspiration for it came when its director and designer duo, André Barbe and Renaud Doucet, investigated the origins of the work in Vienna (premiered there in 1791) and were led to the famous Hotel Sacher, and its one-time redoubtable owner Anna Sacher. It is not explained what connection that nineteenth-century institution has to do with Mozart. But how nice that their travels (whether real or from the armchair) should yield them such ideas – perhaps Così fan tutte on Love Island might follow next, or Idomeneo on Crete or any other Greek-island resort one cares to imagine.

If the choice of a Viennese hotel remains essentially arbitrary – and still less relevant in the absence of any overall backdrop in this semi-staging at the Royal Albert Hall – there remained a few comic and surreal aspects and gestures to amuse. Sacher herself is supposed to stand in for the Queen of the Night to promote the cause of Suffragettes, and Sarastro is no more or less than the hotel’s head chef with his brotherhood acting as his kitchen assistants, seemingly on the basis that, like Freemasons, their profession requires them to go around, for practical reasons, with aprons on. 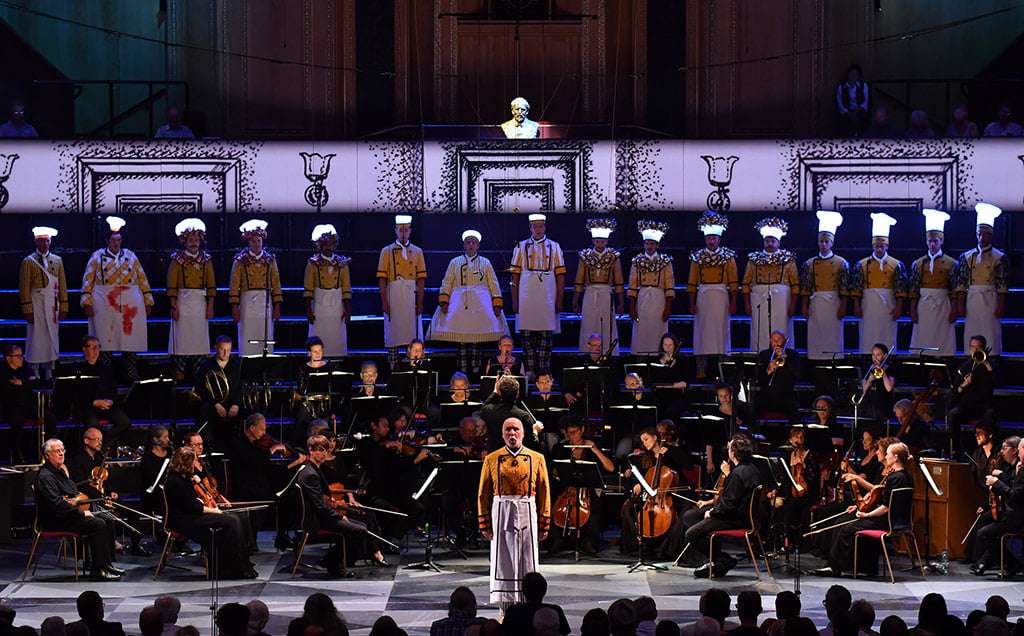 Whether or not Tamino and Pamina are paying guests at the hotel is not clear; but their aspiration to admission to Sarastro’s order encompasses little more than succumbing to the chores of domestic, married life, their trials like a simplistic episode of MasterChef – she does the cooking (trial by fire) and he does the washing up (trial by water). The overall scenario in this particular hostelry may be rather more visually lavish than Crossroads, but it is scarcely any more edifying; and the eccentric appearance of the Speaker of the Temple as a waiter or sommelier, with a drinks trolley, looking like Manuel-turned-matador hardly inspires much confidence either. As Papageno and Papagena position themselves behind the kitchen stove for their cheerful final duet and anticipate the brood of children they will bring up, baby dolls popping out of the machine gestures towards a Monty Pythonesque farce (“bun in the oven” presumably).

A series of clever choreographic effects and puns do not a coherent or intelligible production make, however, and the final reductio ad absurdam is to contort the drama into a sudden compromise at the end when the Queen of the Night is forgiven, and Sarastro and the brotherhood embrace her feminist cause (here nothing more than votes for women, a liberty won 101 years ago in the UK). What the production does not explain – any more than feminism or any identity politics today – is who will do such menial jobs as the cleaning carried out by the three Ladies, or the fire-stoking and general handiwork allotted to Monostatos and his co-workers.

In dramatic terms, the generally noble and expressive performance of the score worked against the comedy and irony of the staging. But, fortunately, Ryan Wigglesworth’s conducting was inspired, supporting a fine cast of singers, and leading a lucid and brisk – though generally not hasty – account with the Orchestra of the Age of Enlightenment. Together they often illumined the inner part-writing of Mozart’s music, with dynamics carefully shaded to create an impression of distance or nearness, as the need arose. Indeed, in some cases the accompaniment was so pared down as to sound merely perfunctory rather than assisting in emphasising the main notes of the vocal melody in a given number or to double it (as in ‘Bei Männern welche Liebe fühlen’ or Sarastro’s O Isis und Osiris’). At the other extreme, the horns were sometimes allowed to rasp rather too violently and unsettle the balance. One textual oddity was the addition of a bar or so towards the end of the very first number following the Overture to create a lead in the normal harmonic fashion to a little cadenza for the Ladies. 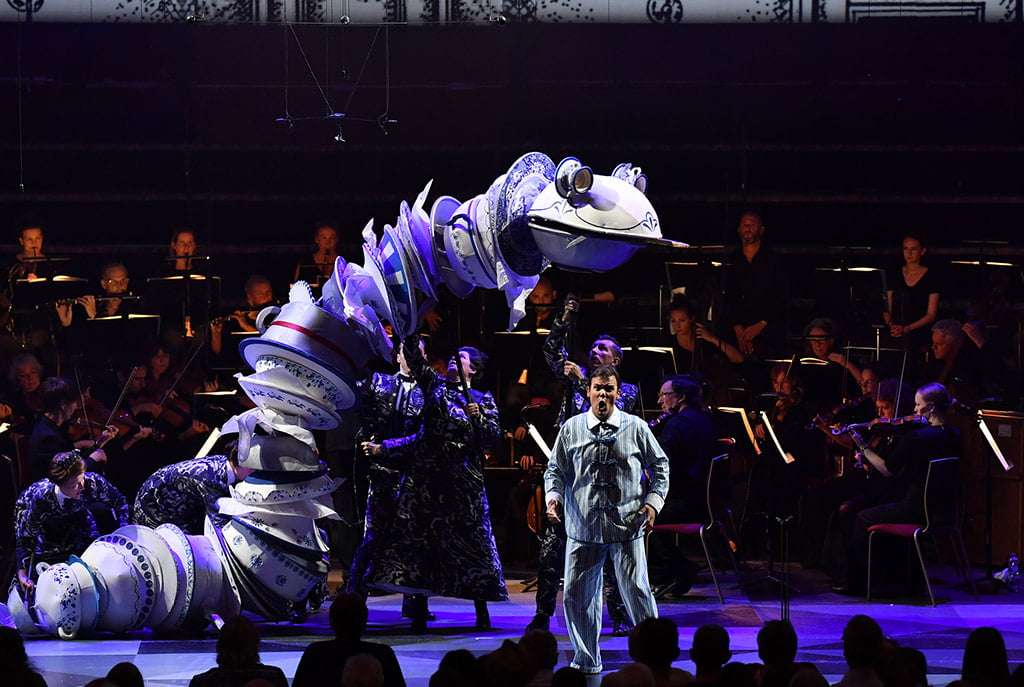 David Portillo sang Tamino with a soft, attractive lyricism, though with a slight inclination to whine as he came under strain in his higher register. Sofia Fomina’s Pamina was similarly clear and fresh-toned, if not sparklingly bright. It was left to Caroline Wettergreen to bring more drama as the Queen of the Night, but even so her performance was refreshingly free of histrionics and steeliness – rather, her first aria was eloquently controlled, and the famous ‘Der Hölle Rache’ musically forthright, drawing some sympathetic engagement with the cause of a character who is here regarded as unjustifiably wronged.

Brindley Sherratt sounded warm and avuncular as Sarastro, though grainy in tone, precluding a completely satisfactory account of the role, whilst Björn Bürger’s solid execution of the part of Papageno made him seem as fully dignified a human being as the princely Tamino, but his pantomimic gestures brought out the character’s harmlessly roguish charm. Where the three Ladies sang with a mellifluous, down-to-earth quality, the three Boys were soberly ethereal, and Jörg Schneider’s Monostatos was more mischievously characterful than evil.

Listeners on the radio will have missed the choreography but, generally distracting as it was, the music emerged as much the more rewarding element.