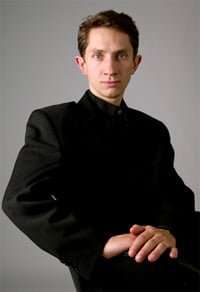 “The comparison is unfair”, Robert Hollingworth protested at the start of this late-night Prom, “the same as saying: with the greatest work of art in the world, how does this compare?”. Yet comparison was inevitable between the sacred music presented in this concert and Monteverdi’s much-performed 1610 Vespers. Hollingworth and I Fagiolini set out to recreate the festal service of Vespers, combining works by Monteverdi’s colleague at St Mark’s Basilica, Lodovico Viadana, with two other relatively obscure composers from the Basilica, Giovanni Basso and Alessandro Grandi, culminating in reconstructions of works by Monteverdi’s predecessor as maestro di cappella at St Mark’s, Giovanni Gabrieli.

The programme followed the liturgical shape of a Vespers service, interspersing psalms with elaborate, composed antiphons, as had been the fashion in wealthy seventeenth-century northern Italy. The concert replicated much of I Fagiolini’s most recent disc, 1612 Italian Vespers. There the dominating work was Gabrieli’s vast Magnificat, newly reconstructed by Hugh Keyte. Here, it was Viadana who became the central figure. Born near Mantua, for much of his life he served as maestro di cappella for the cathedral at Fano, on the east coast of Italy. Enormously prolific as a composer, his influence in his own time was pronounced. One development with which he is credited is an intimate style of motet, in which a single voice is supported by a simple instrumental basso continuo. His motet O dulcissima Maria, performed here by solo female voice and accompanied by lute and chamber organ, is an example of this, and the sweetness and introspection of the motet were enchanting, despite the cavernous size of the Royal Albert Hall.

This was by far the best of the Viadana works performed. His other great, lasting development, evidenced in these psalms of 1612, had been to distinguish between different groups and textures, setting one choir of soloists, favoriti, against a second performing a cappella, as a unit. To the soloists he gave florid, expressive passages of virtuosic writing, to the choir, far simpler music of limited emotional and musical range. The interplay of these two bodies provides musical excitement. In Laetatus Sum the contrast in sound between the warm, bold second choir and the light embellishments of the first one was vivid. Soprano Julia Doyle sang extremely well, flitting across the texture with enviable ease. The combined forces of instrumentalists added their own decorations, and fell back sympathetically for the smaller sound of the favoriti.

The overall effect, however, could become wearisome. In the hands of Monteverdi or Gabrieli, these battling groups of musicians spar, come together, and battle once more. Interest is sustained through dancing, syncopated rhythms, contrasting moods and more daring passages of word-setting. Gabrieli, in his Magnificat, wrote a far more interesting part for the second choir, giving them equal prominence and allowing for greater internal contrasts of texture. In consequence, I Fagiolini performed the more dramatic music with far more energy than its members had showed for the earlier works of the concert, the second choir springing to life as soon as the music permitted.

Keyte’s reconstructions proved flamboyant: towards the end of Gabrieli’s Magnificat the musicians paused to allow a band of offstage trumpets, drummers perched up in the organ loft and what sounded like a large gong to break into action. The effect was rather camp, although entertaining. The same can be said of the staging, carefully plotted to showcase the separate groups of singers and instrumentalists. To begin with they formed a horseshoe: the five favoriti to one side, the second choir in the centre, and an additional choir, doubling some instrumental parts, stood halfway up the stalls behind them. At various points there were some complex and lengthy reconfigurations. This was Early Music seen as a set-piece, with devised staging and self-conscious use of musical effects, in favour of naturalism and Italian colour. I Fagiolini sang with all the careful, studied accuracy and polite choral-scholar qualities of an English choir. Monteverdi’s gorgeous Salve Regina and some weeping instrumental antiphons completed the evening.