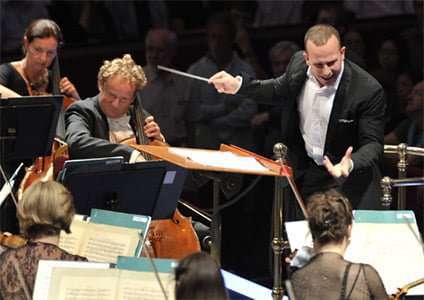 There was a time when everything Yannick Nézet-Séguin touched turned to gold, but this was not the case with his Rotterdam Philharmonic Orchestra Prom, at least not in the first half.

Their performance of Tchaikovsky’s Romeo and Juliet was strangely lacklustre, with extravagant changes of tempo in the opening section not quite masking faltering focus and build-up of tension. The Rotterdam Philharmonic’s excellent string- and woodwind-playing was let down by some unsubtle horn contributions, particularly in the love theme, where the instrument’s line was cruelly exposed to no obvious musical advantage. A smattering of smudged notes, clumsy entries and wallowing ensemble seemed only the more noticeable.

Orchestrally, things improved considerably with the fewer personnel needed for Wagner’s Wesendonck-Lieder , in which Nézet-Séguin conjured the sort of floating rapture and sensual abandonment that drifts out of these Tristan-saturated songs in some exquisitely responsive playing. This was, alas, not completely matched by Anna Caterina Antonacci. Her caution was the main problem, with an eye firmly on the score denying the music’s expansive ecstasy, and her expressive range didn’t project a special affinity for Mathilde Wesendonck’s overheated poems. I liked her almost-Sprechgesang easing into the first setting, ‘Der Engel’ (The Angel), and she opened out radiantly in the climax to ‘Stehe Still!’, but the sheer wonder of the last song, Träume (Dreams), was at best fitful (the one song that Wagner orchestrated, the others done by Felix Mottl). Very much at home in French and Italian repertoire, Antonacci can be a vivid, high-octane presence, but her withdrawn, pallid tone, lack of connection and some wayward intonation sold Wagner’s erotic intimacy short. 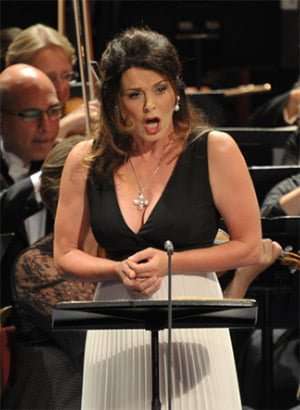 After the interval, though, things snapped into focus with a blistering, impeccably crafted performance of Prokofiev’s Fifth Symphony. It showed off the Rotterdam PO’s virtuosity to great effect, with Nézet-Séguin totally identifying with the work’s balance between gleaming veneer and barely contained eruptive misery, the essence of Soviet callousness oozing out of the music’s pores. The sound bristled with detail – the woodwinds moving easily from astringent sarcasm to consoling lyricism, the strings’ superlative depth of sound and range of colour, lethal and punchy brass, and a horn section that finally showed its true abilities in rising to all of the music’s demands.

Nézet-Séguin’s muscular control of the first movement worked wonders with the nagging undermining of the true fragility of the soaring main theme, a brilliantly drawn psychological split that kept its ambiguity going to the shattering, peremptory climax, and continued into the second movement where the conductor exposed the glacial weirdness at work in the second movement trio, and the trumpets’ introduction into the coda was executed with eerie, blank-faced precision. The orchestra excelled in the slow movement, Prokofiev’s saturated string sound, used to very different ends than in his Romeo and Juliet ballet score, giving up the ghost to the spectral tread of the funeral music, Nézet-Séguin’s magisterial but intimate detailing of its emotional range revelatory. The finale was everything you could want, its cheery progress becoming a fixed smile, then a rictus grin as the music becomes increasingly angular and mechanistic, and Nézet-Séguin brilliantly froze the moment when it becomes unhinged. In this performance, I can’t imagine the guardians of the Soviet flame being fooled by its epic nihilism, and the symphony’s darkness wasn’t completely dispelled by the brilliance of the encore, Shostakovich’s jolly ‘Folk Festival’ from his score for The Gadfly.