“Following last year’s riotous celebration of Colombian music, this year BBC Radio 3’s World Routes Academy turns east to the former Soviet state of Azerbaijan. Eighteen-year-old Baku-born London resident Fidan Hajiyeva performs alongside her mentor, the Azerbaijani singer Gochaq Askarov. One of the most distinguished and eloquent exponents of the ancient mugham form, Askarov has worked closely with Fidan during a recent three-week period of teaching and performance in Azerbaijan. Also featuring on the bill is the first public performance of the newly formed Trio Da Kali, musicians from the Mande culture of southern Mali, and the central Malian singer/ngoni (lute) player Bassekou Kouyaté with his band Ngoni Ba – two celebrated groups fusing traditional and popular styles, who have taken the world music scene by storm.” [BBC Proms website] 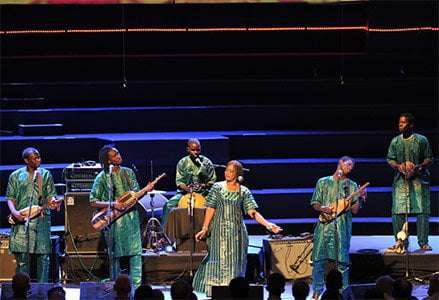 The World Routes concert is now a regular feature of the Proms. This one drew on the music of two very contrasting economies – the oil-rich Azerbaijan, hosts of the Eurovision Song Contest in 2012, and one of Africa’s poorest countries, Mali, now taking positive steps to recovery after occupation by Islamist factions, who sought to ban music in its entirety, shocking in itself, and often a double-edged sword, firing creativity from adversity – which is what has happened in Mali, reinforcing an already strong musical climate. Perhaps the biggest players in the country in recent years have been the desert tribesmen Tinariwen, scheduled to perform at this Prom but sadly indisposed. The fringe benefit of this was the chance to see Trio Da Kali, in its first-ever appearance in public!

They were not overawed. Like Tinariwen, Trio Da Kali draws on Mali’s roots. The first song, ‘Namanike’, began with a flourish from the balafon, a sonorous and more resonant cousin to the xylophone, before the vocals of Hawa Kassé Mady Diabaté were ushered in. Rather worryingly she could be seen wielding an axe in the final bars, celebrating the labour of young men in the fields. The willowy form of Mamadou Kouyaté – son of Bassekou – appeared for ‘Ladilikan’, adding his bass ngoni to the mix. This instrument is a relatively recent fixture in Mali popular music, revolutionised by Bassekou to enjoy a similar prominence to the guitar in Western pop. It is thinner, like a small cricket bat, and its equally thinner sound gave the music a distinctive accent. This song had a more languid rhythm, Diabaté’s balafon taking on the sound of a soft steel pan. There were two more items, of which ‘Tita’ was more traditional, with meaningful solos also on the bass ngoni, while ‘Lila bamboo’ illustrated Mali’s heritage graphically and passionately. 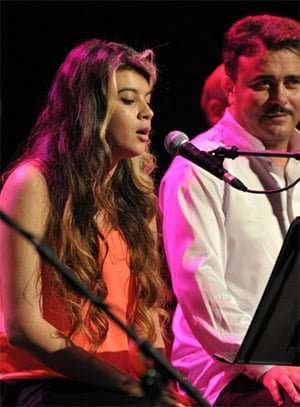 From Mali we moved to Azerbaijan, and to the vocalist Fidan Hajiyeva, this year’s World Routes artist. She is the latest addition to a scheme that picks promising young talent and pairs it with an established figure from the same country, in this case the revered Gochaq Askarov to spend time together making music – in this case mugham. Hajiyeva is an eighteen-year-old, a Londoner born in Baku. She alternated vocal duties with Askarov, and her mentor has a truly remarkable voice, capable of the most unusual manipulations at a high pitch. Hajiyeva’s singing, a work in progress, possesses a winsome timbre, especially when authentic ornamentation is applied. The supporting band made music of great colour, playing the lute-like tar and oud, the balaban, a double-reed woodwind instrument, the kamancha, a thin-stringed instrument with a wirier sound than the violin, and the naghara, a drum placed under his arm. Songs could be reflective and trance-like, triple-time rhythms held in sway by Askarov’s effortless vocals, but the real showstopper was ‘Chaharqah’, introduced by a shivery tremolo and the nasal timbre of Fataliyev’s balaban. Askarov’s contribution was remarkable for its timbre and control, the song reaching an ecstatic mood. How the performers remained sitting during music of such intensity was a mystery!

We returned to Mali and Bassekou Kouyaté, with his group Ngoni Ba, formed in 2006. Kouyaté became something of a musical spokesman during last year’s occupation, deeply rooted in the Garana village on the banks of the Niger, where he was brought up. With Ngoni Ba he formed the first ngoni group in 2006, and the musicians played their cricket-bat-shaped instruments with great dexterity and energy. ‘Sinaly’ was given without the front-man and gave us a chance to enjoy the percussion talents of Moctar Kouyaté, playing the calebasse (a large gourd) and cymbals with his bare hands, and Mahamadou Tounkara, who initially shook his gourd on the off-beat. The sound was too heavy initially; the bass and vocals booming around the Royal Albert Hall, but this soon righted.

For ‘Jama ko’ Bassekou arrived introduced by a fusillade of beats from a tama. This remarkable instrument is a “talking drum”, worn on the shoulder of Tounkara, who demonstrated incredible control. The music itself was more westernised, with bluesy phrases. The ngonis offered rhythmic support that seemed at times to exist in a different time signature. Finally the pentatonic ‘Ne me fatigue pas’. This was written during the occupation, but considering the circumstances it was a joyous and bouncy utterance. After some early ‘wah-wah’ effects on the ngoni this song began to fizz, driven by the vocals of Kouyaté’s wife Aminata Sacko, and when the tama came to the fore for a throbbing beat people began to dance, driven into a trance. Such affirmation brought tears to the eyes, the band driving to a thunderous finish.