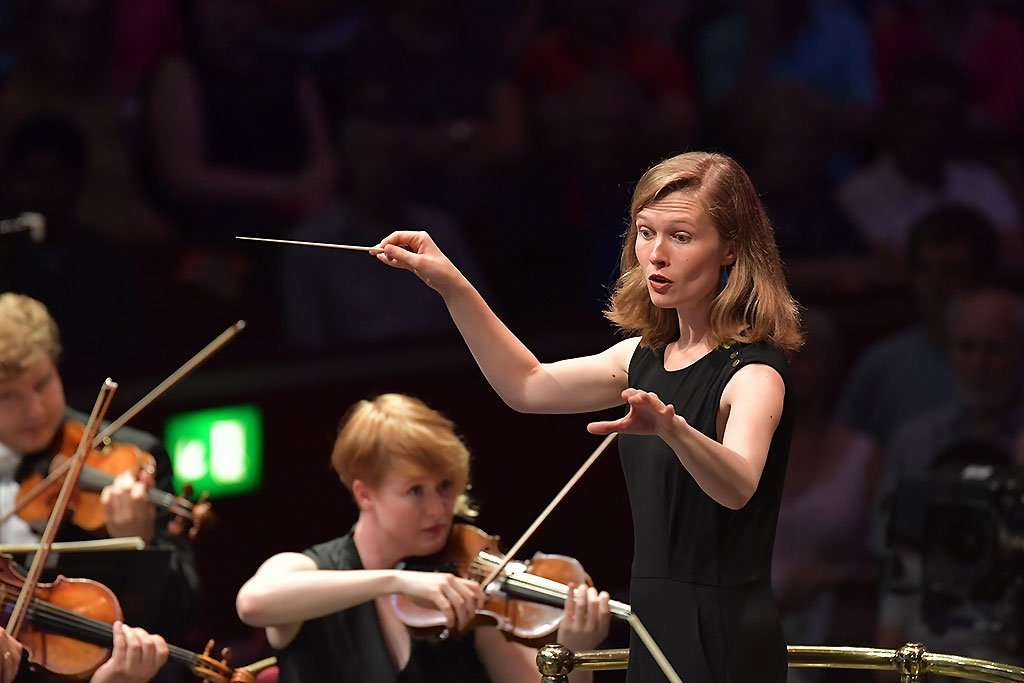 At one level, this Proms programme might appear to be made up of unconnected pieces, for the inclusion of Hans Abrahamsen’s let me tell you is not – at least, on paper – the ‘kind of work’ an orchestra will risk programming during a normal season, for all that the Mozart and the Tchaikovsky are staples.

But, at a deeper level, these three works each address, in their different ways and across four-hundred years of growing European enlightenment, the human condition when confronted by what is generally assumed to be Fate. Consequently, without knowing the planning that went into this programme, there was a linking thread of experience, allied to a confrontation of those elements of perception which lie outside daily human congress, culminating in the astonishingly original masterpiece which is Tchaikovsky’s Fourth Symphony.

Not that one experiences much in the way of the extra-human condition in the Overture to The Magic Flute, although the undoubted Masonic symbolism which runs through much of the story – and, for musical Masons, the music itself – is there for all who are interested in such matters to see and hear for themselves.

However, the Masonic nature of The Magic Flute is not something that can be ignored if a full appreciation of the music’s qualities are to be grasped, even in the Overture: the first sounds an apprentice Freemason hears are three solemn knocks on the doors of the Temple; the three powerful chords which begin the Overture should leave one in no doubt as to the solemnity of the occasion: cautious, certainly, but also strong, weighty and purposeful, overseeing and occasionally interrupting the pleasant humour which is such a feature of much of this opener.

On the cusp of becoming the next music director of the CBSO, following in the footsteps of Andris Nelsons, Sakari Oramo and Simon Rattle, in Mirga Gražinytė-Tyla’s reading, one felt, from the opening bars, that insufficient thought had been given as to what this music is about – Adagio, alla breve is the indication. For all the excellence of the playing, these bars were simply not as Mozart wrote them; when the Allegro (still alla breve) began, the absurdly fast tempo Gražinytė-Tyla adopted made one wonder if she thought she was conducting The Marriage of Figaro, for Mozart’s sudden changes of dynamics were rushed, their sly inferences reduced to a gabble, and many of Mozart’s subtle points were absent.

If Mozart’s Overture seeks to reflect the opening of doors to a new world then Hans Abrahamsen’s let me tell you (2013) attempts a similar journey, albeit at several removes. This large-scale (35-minute) song-cycle is based upon a novel by Paul Griffiths, which tells – entirely through the first-person – Ophelia’s story. Parenthetically, we may note Griffiths’s excellent English translation of the libretto of The Magic Flute, and in let me tell you, he set himself a considerable challenge by confining himself only to Ophelia’s 481-word vocabulary in Hamlet.

It may well be that Danish composer Abrahamsen (born in 1952) utilises a similarly constrained musical vocabulary in setting the text, which comprises seven songs. Therefore, we have a text which Shakespeare would have had little difficulty in recognising or understanding, but one which poses challenges for the composer. 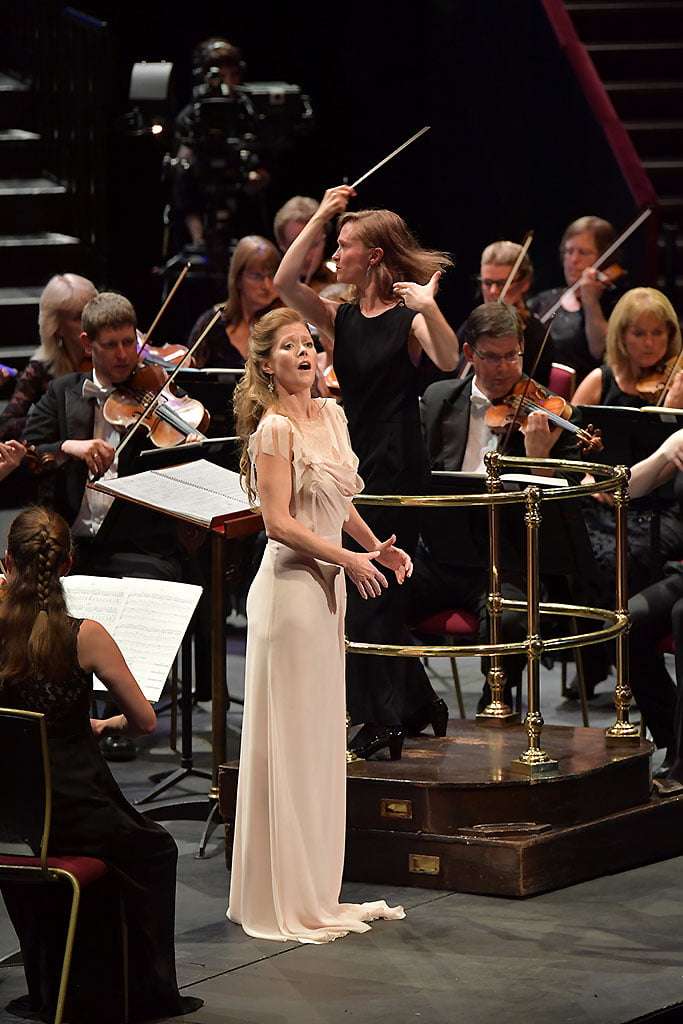 The programme note (also by Griffiths) asserted that Abrahamsen’s compositional technique utilises much traditional harmony and recognisable key-relationships but in a new way. That may well have been Abrahamsen’s intention, but the resultant harmonic thinking is not something that struck this listener in this manner. Indeed, I found myself thinking of Deryck Cooke’s explanation, in 1967, as to why The Beatles were so important musically: “the popular song has always been relentlessly diatonic and based on common chords; but Lennon and McCartney continually juxtapose these chords, and others, in surprising new relationships, mingling major, minor, Dorian, Aeolian, Lydian and Blues progressions in unprecedented ways.”

Abrahamsen does not even go as far as Lennon and McCartney did, coming across in this setting as harmonically resource-less and primitive.

In mitigation of this criticism, by choosing this subject and Griffiths’s extension of it Abrahamsen presents himself with two choices: should he attempt a musically psychological portrait of Ophelia, or merely illustrate what are perceived to be her thoughts in terms of describing her situation, her position, and her challenging relationships with either Hamlet or with her father and brother, whilst outlining aspects of the madness from which, in her eyes, there is only one escape?

Considering Abrahamsen’s musical background, it is no surprise that he takes the second, illustrative, course, for his earliest works tended to define the course his music would take, and equally, regarding Griffiths’s text, both the librettist and the composer make difficult for themselves the opportunities of genuine organic perception and investigation into Ophelia’s inner character – and, anyway, Shakespeare presents her in terms which do not, of themselves, go very deep. She is an inexperienced girl, trying to come to terms with the conflicting pressures under which she has to live, and which – eventually – destroy her, first through her lying, then through her suicide.

Here is a profoundly complex human situation which Mahler, Schoenberg – perhaps even Britten – would have relished, but which Abrahamsen flunks, contenting himself to provide colourful music, not too ‘difficult’, relatively easy-on-the-ear, or at least an ear not unfamiliar with gestural, New Age sound-bites.

The singing of Barbara Hannigan (mostly from memory) was exceptionally compelling, and the playing maintained the high standards of the Mozart – but Hannigan, for some extraordinary reason, performed at times to one side of the auditorium rather than centre-stage and tended to project to her left, which obliged half of those in the Hall (on her right, where I sat) to try to catch what she was singing and having to make do by seeing her almost constantly turning away. 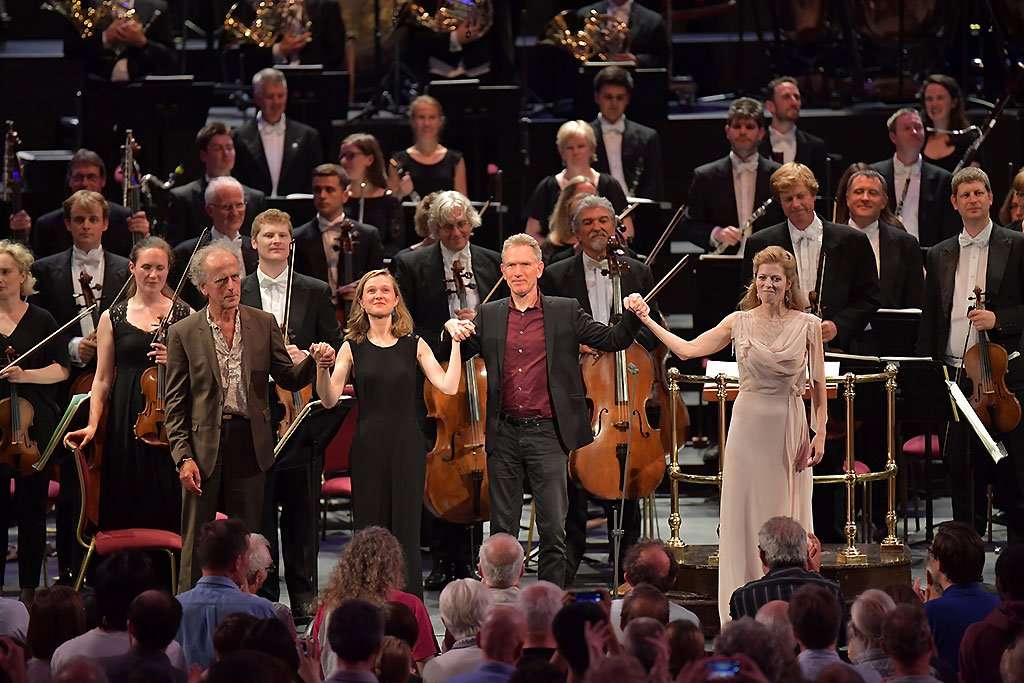 But overall, the influence of Stockhausen came across as being the foundation of Abrahamsen’s score, certainly in the first of its three movements wherein a monotony of tonality (pace Griffiths) is subjected to a few textural variations over too great a length of time (half the work’s 35-minute duration), so that one’s interest is in serious danger of being lost; in addition, the composer’s word-setting tends to inhabit too narrow an expressive range in depicting a teenager contemplating – and achieving – suicide. The performance though was magnificent, and must have thrilled the composer, taking his bow along with Griffiths.

Students of Tchaikovsky’s Fourth Symphony will know of an earlier Paul Griffiths connection: a published analysis which, however, does not tell us anything we had not previously encountered, occasionally in quite old publications. Yet this masterpiece restored originality to this Prom through its extraordinarily unique, genuinely symphonic construction – virtually unlike anything encountered before in the history of ‘the Symphony’, possibly excepting Berlioz.

Gražinytė-Tyla once again drew remarkably fine playing from the CBSO, but hers was a disappointingly superficial reading. The inherent symphonism of Tchaikovsky’s Fourth is founded upon the composer’s large-scale integration of contrasting mood within a relatively constant pulse, but in the first movement especially Gražinytė-Tyla fell into the long-discredited trap of conducting each section in unrelated tempos – the result of setting too fast an initial speed for the Moderato con anima, and of misreading the indicated pulse of the 9/8 bars.

Consequently, the ‘symphony’ came across as a kind of large-scale ballet suite; I forbear to mention all of Gražinytė-Tyla’s doubtless well-intentioned misreadings but her egregious and utterly unwarranted accelerando in the closing pages demonstrated her shortcomings all too clearly. A section from Tchaikovsky’s score for The Sleeping Beauty was played as an encore.

One final curiosity: In the first half, Gražinytė-Tyla had the double basses to her left, behind the cellos; in the second half, they moved to extreme right, as in a ‘normal’ sitting, with cellos to her right (second violins had been to her right in the first half); an odd and totally unnecessary change. Why? Answer came there none.