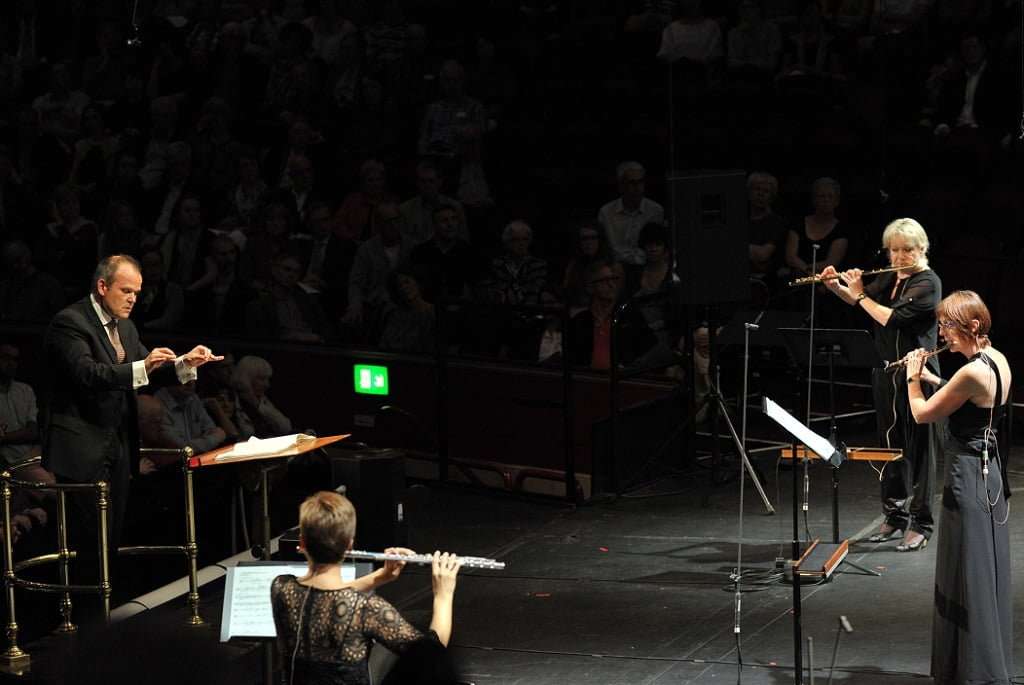 A first and a last, as François-Xavier Roth told the audience after this Prom. The SWR Symphony Orchestra Baden-Baden and Freiburg will be celebrating its 70th-birthday next year, but it will then be merged with the Stuttgart Radio Symphony Orchestra and lose its identity – so its Proms debut also marks its Proms farewell. The delicate strains of the main melody of Schubert’s ‘B-flat Entr’acte’ from Rosamunde (that’s all that was played) can surely have never sounded so poignant, and the audience applauded until the last players (the two harpists) had vacated the stage.

Only 25 musicians were required for the first half – continuing the Proms’ 90th-birthday celebrations of Pierre Boulez. An earlier version of ‘… explosante-fixe …’ had been given by Boulez with BBC Symphony forces back in 1973, and this current one is substantially different. Previously it did not feature a named flautist, but seven instruments and an electronic gadget called a ‘halaphone’ – designed by Hans-Peter Haller – which had been realised at the Strobel Foundation of Freiburg. It achieved its ‘final’ form (although only utilising two of a potential six ‘Transitoire’ sections – curiously numbered II to VII – and two ‘Interstitiel’ sections – leading to ‘Originel’, thus ending, as it were, at the beginning) in 1993, following Boulez’s setting up of IRCAM underneath Paris’s Pompidou Centre to pursue the development of electronic techniques in music. First of all there was a preliminary version, ‘Mémoriale’ (to be heard at the next Proms Saturday Matinee, August 29), dedicated to flautist Lawrence Beauregard (dead at the age of 28) who was to have been the original soloist.

Three groups of players – eight strings, seven brasses and seven woodwinds – sat on the Royal Albert Hall’s risers, leaving the stage free for the three flautists. Flanking Sophie Cherrier – who premiered and recorded the work with Boulez – were the orchestra’s own flautists, Dagmar Becker and Anne Romeis. All three flutes were hooked up to microphones for the live electronics, manipulated by the four-man team at the back of the Arena. 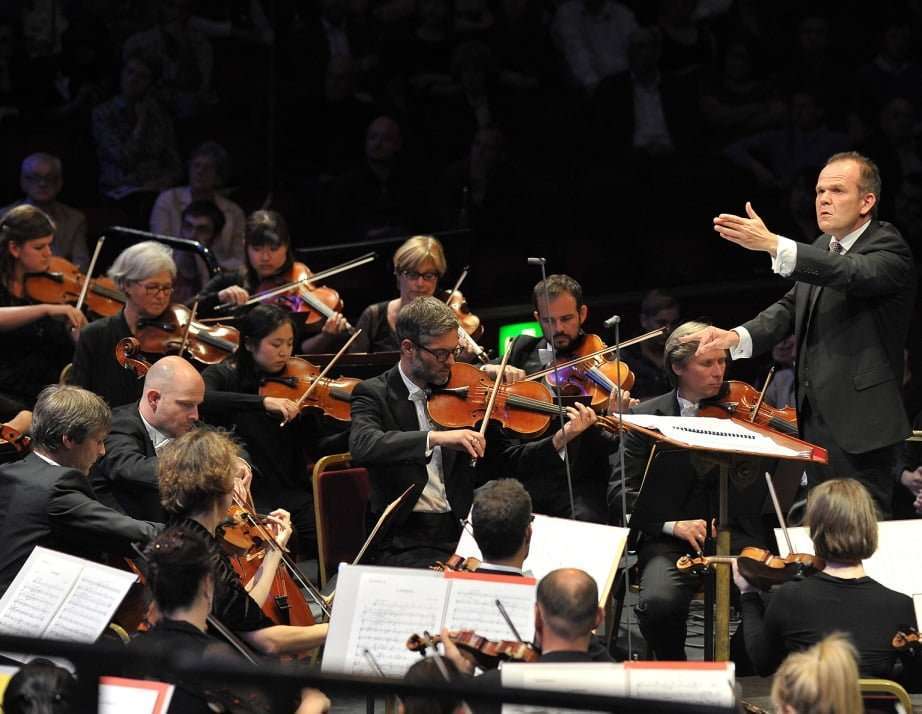 What followed was half-an-hour of intertwining lines, added to by the relays and modulations from speakers around the auditorium. I could not tell whether what I heard from the speakers was different from what someone else would hear, and so – in some sense – I was only getting a partial effect. It did not detract from my enjoyment; on the other hand the subtle electronic effects made me more puzzled about the structure of the work: the five sections not clear, rather sounding as a mesmeric whole that eventually dissipates. A respectful few seconds of silence ended in genuine warm applause.

The interval was required to restructure the stage for a ‘normal’ symphony orchestra allowing us to step back in time to 1967, when this very orchestra premiered György Ligeti’s Lontano (a fact omitted from Stephen Johnson’s programme note – but referred to by Roth in his impromptu speech). Ligeti’s audacious use of the orchestra – suppressing melody and creating a slowly moving effect instead – may not be surprising now (indeed Anders Hillborg’s Beast Sampler – given here in Prom 47 – does something similar), but it is still satisfying to witness as fine a performance as this; the three climaxes inexorably built by Roth (looking not unlike the younger Boulez, and with similar hand gestures). There’s that typical Ligeti trait of the pitch getting ever higher, suddenly to disappear to be replaced by the lowest notes. In his earlier Atmosphères it is a loud changeover, but in Lontano it is hushed, but equally effective. 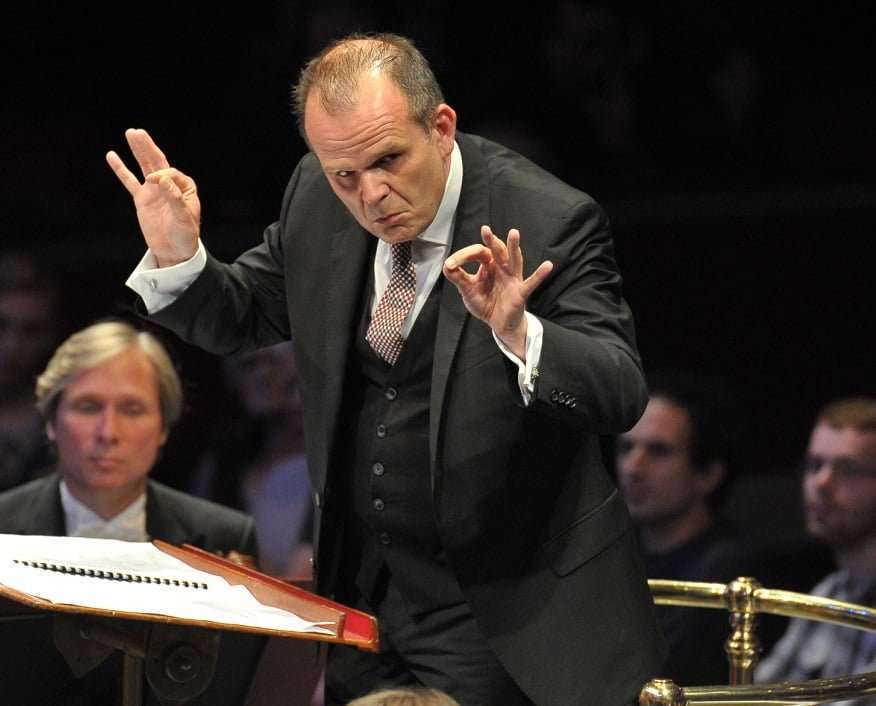 Save for the necessity of a small modification of players (out with the bass clarinet, on with the two harpists) – and a regrettable mobile-phone ring just as the Ligeti ended – Bartók’s low cellos and double basses at the start of Concerto for Orchestra could have seamlessly emanated from the close of Lontano. This performance had bags of spirit and joie de vivre. The woodwind pairings in the second movement ‘Game of the Couples’ contrasted nicely with the slower rippling tread of the ‘Elegia’, while the cocking-a-snook at the success of Shostakovich’s ‘Leningrad’ Symphony in the ‘Interrupted Intermezzo’ was not satirised too much. As the Finale brought the work to its climax I was reminded, in the clarinet’s ripples, of Bluebeard’s watery ‘sixth door’. Perhaps tears for the loss of an orchestra and its rich heritage…