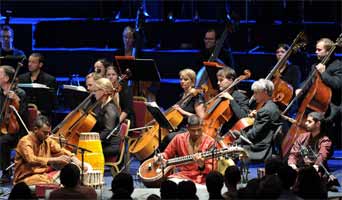 There can’t have been a tougher audience this season: not least a young girl who, at the top of her voice, decided that she’d had enough within seconds. However this was the Family Prom and latitude is given to the youngest hecklers. Self-styled “tour guide”, BBC presenter Louise Fryer introduced the concert, though with so little said about the countries visited a trick was surely missed and the interest of a large part of the very young audience was frequently lost.

The ‘party’ euphoria seems to have been caught by Northern Sinfonia, which gave a brisk, if foursquare account of the Dvořák’s Slavonic Dance – lacking in style but nevertheless enjoyable. From Bohemia to England, Delius’s On Hearing the First Cuckoo in Spring (composed in France to a Norwegian folk-tune) fared better in a performance that was all the better for not being laboured.

Hari Sivanesan’s Kāla, Sanskrit for ‘time’, combines, through written and improvised sections, folk and classical Carnatic genres. This enjoyable piece depicts the lullaby of life, its struggles and finally a sense of hope. Over-amplified solo instruments left the Northern Sinfonia’s strings struggling to be heard.

The Manuel de Falla snippet is a colourful dance of exorcism; Candela, a young gypsy girl haunted by the ghost of her dead husband, performs the ballet to get rid of him, He appears, they whirl around faster and faster until the ghost is drawn into the fire. Buzzy viola trills and a wide range of dynamics made this performance crackle from the start. 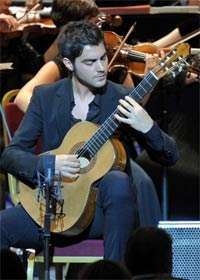 Miloš Karadaglić’s improvisatory-styled performance of the second movement of Rodrigo’s Concierto de Aranjuez cast a different light on this composer’s most famous work. Perhaps a little self-indulgent, Karadaglić kept to a good tempo that avoided excessive sentimentality. A slip towards the end of the cadenza was unfortunate but not surprising considering the noise from the hall: interest was waning. He offered a Brazilian samba as an encore, by Isaias Savio (1900-1977). Fife and drums came next as Bizet’s ‘Farandole’ awoke a sleepy audience from its Andalusian siesta.

Northern Sinfonia took a longer break than everyone else, leaving the stage to the numerous members of the Proms Family Orchestra and Chorus, the participants spanning many generations from four up to, we weren’t told … the youngest, on tambourine, seemed bemused by the attention she was getting. The piece played was devised by the group and directed by Lincoln Abbotts, putting everything together over the past four weekends. It took as its inspiration words by Ian McMillan and music by Jason Yarde. Wish You Were Here tells a story, through a series of postcards, of a family visit to London: first North London, with Klezmer, then the steel drums from West London (nicely timed to coincide with the Notting Hill Carnival a few miles away), South London (Soul music) and finally drums and Bhangra from East London. This was a fun-filled and lively presentation. 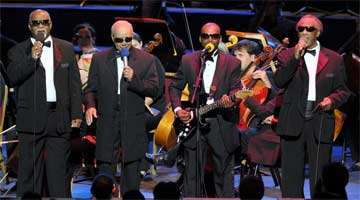 The final stop (hardly a world tour) was Alabama in the Deep South of the United States. The Blind Boys of Alabama have been singing Gospel music since 1944; Jimmy Carter has been with the group since the start. Praying Time, sung unaccompanied, highlighted (a little shakily at first) the group’s well-known close harmonies. Northern Sinfonia returned to assist in four Spirituals arranged by Yarde, including Amazing Grace to the tune of House of the Rising Sun – an arrangement no less legitimate as the more-common melody, itself an amalgamation of two melodies (Gallaher and St Mary). A rousing chorus of Down by the Riverside, together with a prepped audience, merrily ended a concert that wasn’t quite as successful as previous family-friendly Proms.