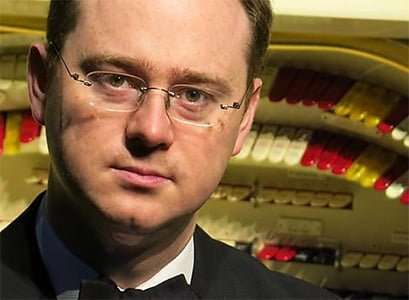 No, not a concert played on a Hammond SK1 (the smallest and lightest organ that the company has ever made) but a recital that showcased melody played on the immensely powerful (but rarely heard during a Prom season) Henry Willis/Harrison Royal Albert Hall instrument, which with 147 stops and 9,997 pipes it is the second-largest organ in the UK (since 2007, the Liverpool Cathedral Grand Organ also built by Willis is the largest). The list of stops includes carillon (bells) and bass drum alongside the more traditional.

Each piece of music was knowledgably introduced by Richard Hills who engaged well with the audience. He had spent a lot of time working on his programme – including working through the night at the organ and his attention to detail showed in the variety of colours that he used on this, essentially, orchestral instrument.Eric Coates wrote a number of pieces that were used as television start-up music. Sound and Vision was written in 1955 in answer to a commission by Associated Television (ATV) as a signature tune for the afternoon’s broadcasts and in a similar way Hill’s bright, bustling performance was a signature to this matinee. A recording from the 1930s inspired Hills’s arrangement from Gilbert & Sullivan’s Mikado, a medley of familiar tunes that included comic touches such as bird-like trills in ‘On a Tree by a River (Willow, tit-willow)’.

There followed two pieces that were written for the piano. Billy Mayerl’s Four Aces Suite was one of his best-sellers and was inspired by his interest in card games. ‘Ace of Hearts’ is third in the Suite and the most melodic; the carillon stop added a splash of colour to the gentle off-beat melody. Thomas Wright ‘Fats’ Waller was a talented organist as well as a gifted pianist and by the age of 14 he was playing the organ at the Lincoln Theatre in Harlem. A Handful of Keys is a composition in the stride-piano style and technically very demanding. While the use of pedals took away some of the complexity (of left-hand alternating bass-note/chord) Hills’s performance was an impressive showpiece with a swathe of colour.

Nell Gwyn dates from 1900 when Edward German was music director of the Globe Theatre in London. The ‘Dances’ were an immediate hit with Henry Wood giving the first concert performance at a Prom in September that year and no-less-popular as the jolly capers of the ‘Country Dance’ gave way to the more serene ‘Pastoral’ (with bell and bass-drum stops) followed by the nautically effervescent ‘Merrymakers’ Dance’.

The only piece in the concert conceived for organ (the programme was largely silent on who made the arrangements), John Ireland’s Villanella is an early work from 1904. The composer revisited it some 40 years later, adding two other pieces, also from 1904 (‘Intrada’ and ‘Menuetto-Impromptu’) – and re-published it as Miniature Suite. Ireland started out as an organist and this shows through in this well-craft morceau that was given a commendable, hypnotic reading.

The final piece of the afternoon, and possibly the most technically challenging, was Roger Quilter’s A Children’s Overture. A huge variety and complexity of stops were used (Richard Hills told us it took him four hours to set them) in this medley of interwoven children’s nursery rhymes. The work dates (in its orchestral form) from 1919, although it is a re-working of material from 1911. The most substantial piece of the afternoon, it was worth the wait to hear this bubbly presentation of this delightful music – including a fully formed fugue for a wooing frog!

Saving the best until last, as an encore we heard the jazz standard Tiger Rag. Recorded and copyrighted in 1917 by the Original Dixieland Jazz Band the piece as played here was a joy to all who enjoy the art of improvisation. Richard Hills thrilled with his phenomenal keyboard dexterity and musical wit in this charming performance that included witty touches and a quotation from Widor’s famous ‘Toccata’ (from his Organ Symphony No.5) reminding us of Hill’s day job as Organist of St Mary’s Bourne Street.