“The Proms revisits one of [Leonard] Bernstein’s groundbreaking televised concert-presentations – The Sound of An Orchestra – reimagining it for the 21st century. Conductor Joshua Weilerstein rebuilds the classical orchestra from the ground up.” [BBC Proms website] 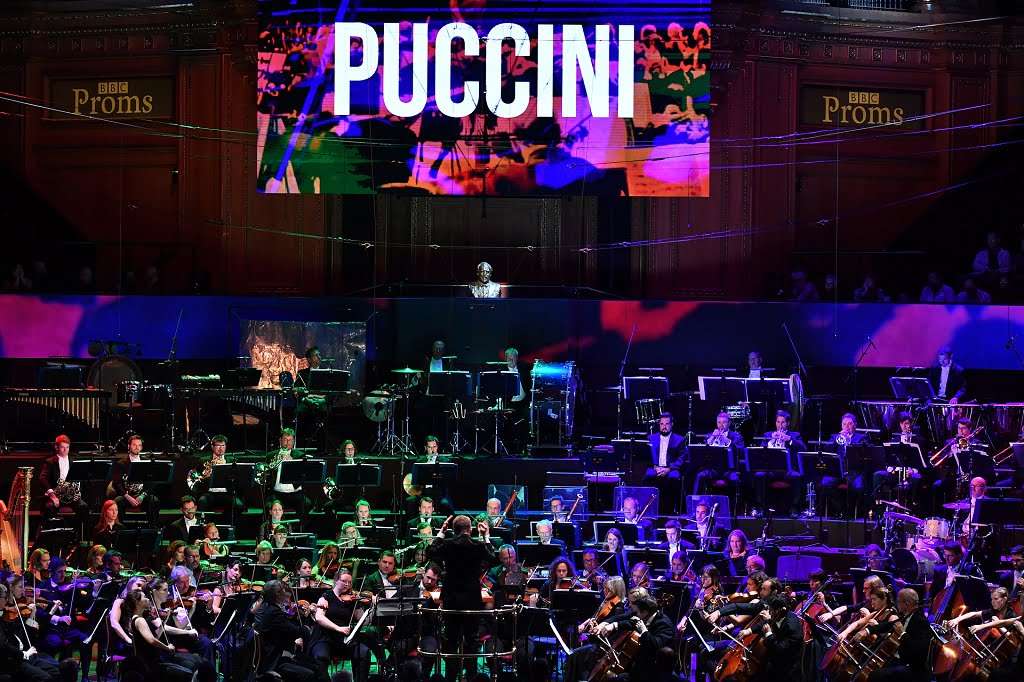 No homage to Leonard Bernstein could ignore his proselytising zeal as an educator, and – on this centenary weekend – the Proms followed its concert performance of On the Town with an exhilarating musical ride through three centuries’ worth of orchestral music to try to investigate “the sound of an orchestra”. If that sounds like a very Lenny type of thing to do, you’d be right – and, indeed, he so-titled one of his Young People’s Concerts with the New York Philharmonic, which was first broadcast in December 1965. And here he was, courtesy of the projections across the Royal Albert Hall, be-suited and suave as ever, introducing the idea from across the decades.

Beneath the screens was not the New York Philharmonic but the Royal Philharmonic. Standing in front of the players was not a hologram or film projection of Bernstein (though, given that such technology has brought back to the West End stage Sinatra and Elvis, it can’t be too long) but one of the newest generation of American conductors, who – in his social media-ing and podcasts – has shown his own proselytising zeal, Joshua Weilerstein. However, unlike Bernstein’s original concerts, the talking was mainly done by others, recorded voices. The programme explained: “words as well as notes from all sorts of different people, from actors to schoolchildren to members of the public, reading sometimes charming, sometimes quite mad texts drawn from many different sources: from music lovers and music haters; composers and musicians from Beethoven’s time to our own day; poets, novelists, painters and journalists…”. Some (particularly composers) were name-checked on the video screens which would display sepia-treated portraits as well as news footage in a heady concoction that was truly amazing. 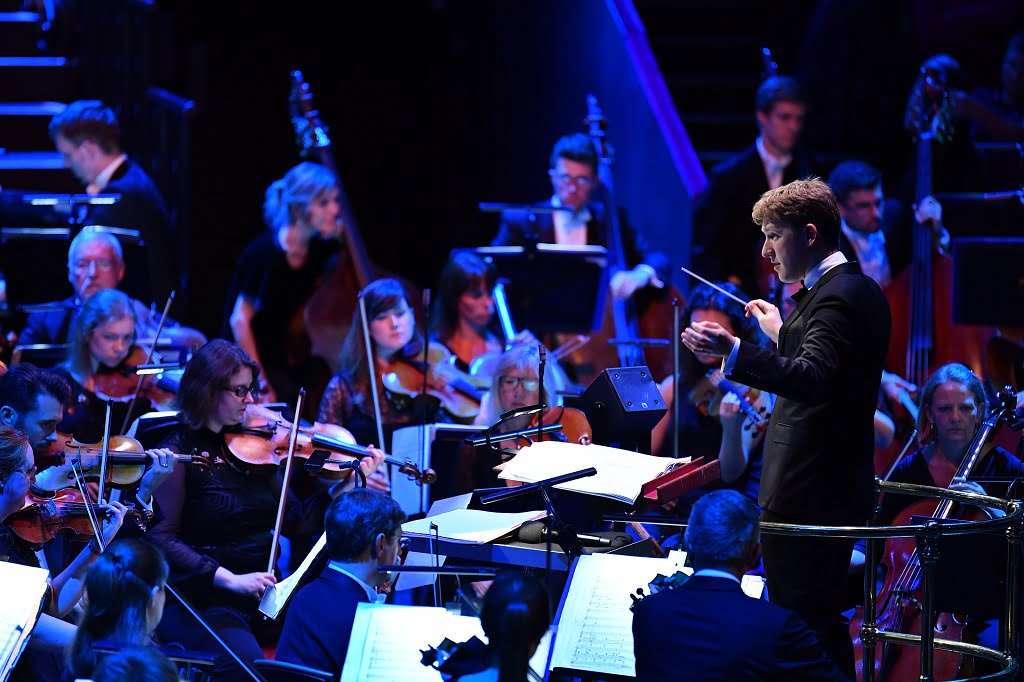 Two examples must suffice. The hour-long presentation started with a virtuosic panorama of the octave unison with a series of opening chords (as well as tuning, to start and to return to) of a kaleidoscopic range of works. The wonder was that even with just one chord how many pieces were instantly recognisable. But the momentum was already careering us on to dissonance – to which Weilerstein unwittingly added a crackling electronic sound in The Rite of Spring excerpt by knocking a microphone, from which he recovered very well. Later urban landscapes and the machine age were represented by a sequence of Mossolov (Iron Foundry), Shostakovich, Bartók and Lenny himself, while the end was left to Charles Ives’s surprising discord at the end of his Second Symphony, prefaced by a recording of him singing. Ah, that was not quite the end. Centenary Debussy snuck in at the last minute to add the final bars of Jeux – a delicate quip to end an astonishingly absorbing hour that simply opened our hearts and minds to the ineffable mystery of music.

And what, might you ask, a jaded critic discover from such a presentation? Well, I was amazed to learn how Tchaikovsky builds the beginning of the Finale of his ‘Pathétique’ Symphony, making it more complex by constantly shifting the melody, note by note, between the string sections; only when played together does the aching melody properly sound as Tchaikovsky intended.

This was all brilliantly conceived by Gerard McBurney, although no less important to the mix was the video projections masterminded by Mike Tutaj. 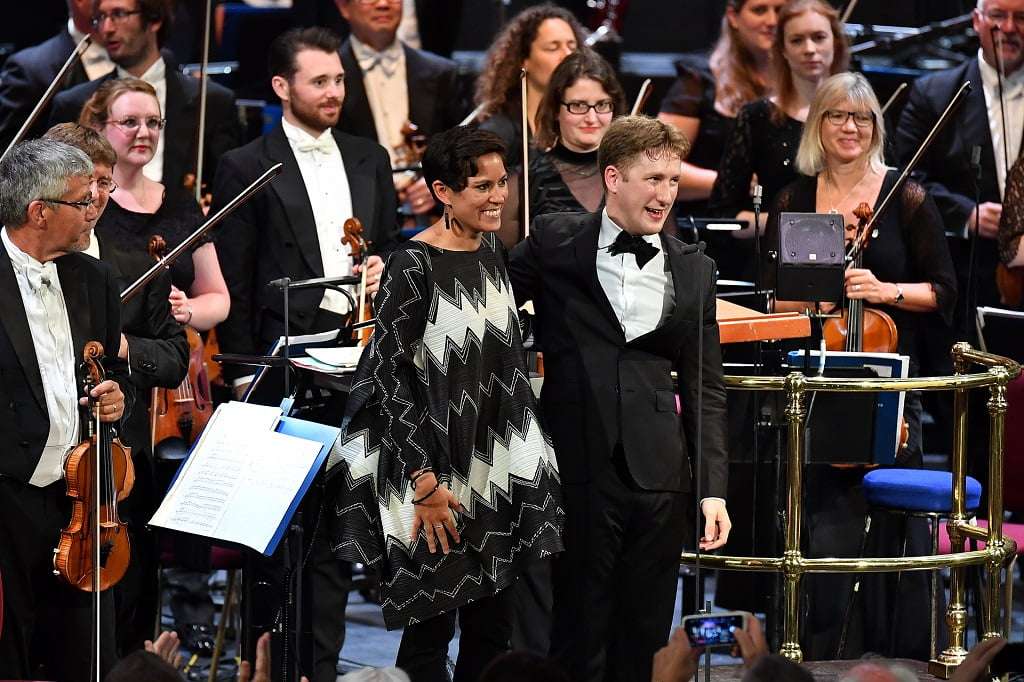 And the magic continued after the interval where we heard a sequence of six short works complete. As Weilerstein explained, this was designed to work in reverse historical order, starting with new-to-UK Elizabeth Ogonek’s All These Lighted Things (first movement), and peeling back through Lenny’s Wonderful Town Overture, Ligeti’s Atmosphères segueing straight into Debussy’s La mer (final movement), the Prelude to Act One of Wagner’s Lohengrin and ending with Beethoven’s Egmont Overture. The last two were prefaced by more recorded voices (the Wagner by the composer’s rather arch and pompous distinction between poet and composer). The ethereal majesty of Atmosphères – breathtakingly sustained by the RPO – was an intriguing foil for surging Debussy and that too for the rapt Wagner, while Beethoven’s Egmont was a suitably revolutionary end to a revolutionary evening.

The retreat across the centuries meant that after most pieces some members of the orchestra, no longer needed, left. I did wonder if an even better ending would by Haydn’s ‘Farewell’ Symphony, to leave the stage almost devoid of players. The only thing missing was an appearance of McBurney and Tutaj, who did so much to make the concert an eye-and-ear-opening occasion.