“Distinguished naturalist and broadcaster Sir David Attenborough presents a concert inspired by his recent BBC Television series, Life Story. The soundtrack, composed by Murray Gold (who has written the music for Doctor Who since 2005), takes centre-stage, performed by the BBC Concert Orchestra. Sir David introduces sequences from the series played on big screens and is joined by members of the production team, who offer insights into the making of this stunning natural history series.” [BBC Proms website] 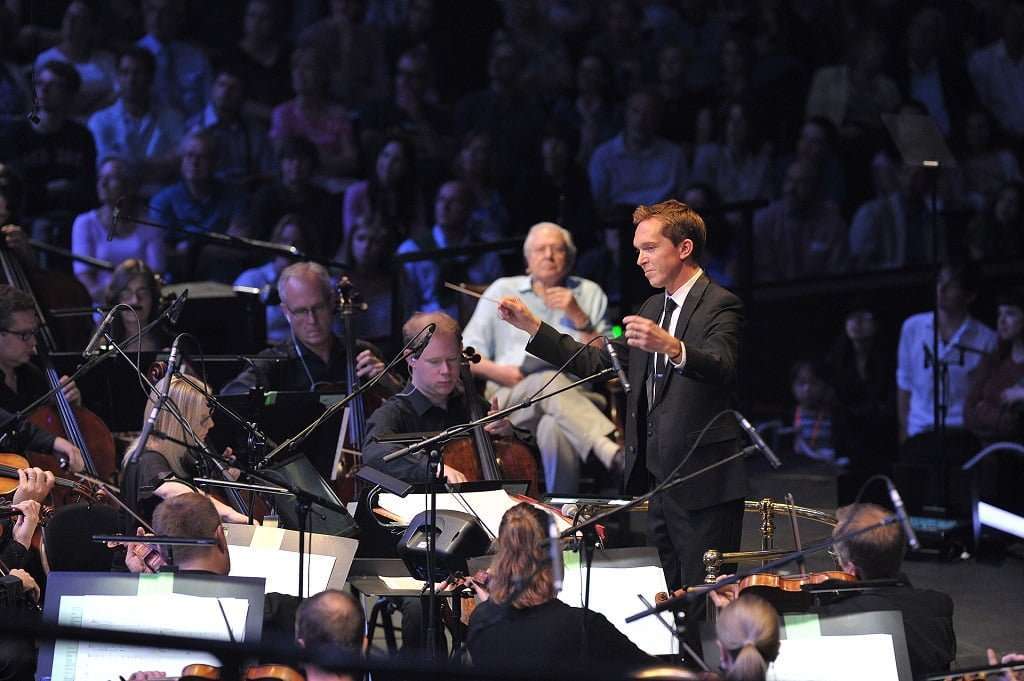 It is some seventeen years since television-branded Proms entered the annual Royal Albert Hall series: the first Blue Peter Prom was back in 1998. Since then drama (Doctor Who and this year’s Sherlock Prom) and documentary have become a regular feature, and their rude health was evident for this packed matinee. And it is notable that the only complete standing ovation I’ve seen this year was not for a musician, but for Sir David Attenborough: a life force that, current political arguing notwithstanding, stands unequivocally as the best advertisement for the continuance of the BBC as it is. Parliament: please note.

Dressed in trademark light-blue shirt and cream-coloured trousers, Attenborough – script in hand, but discretely reading from a pair of autocue – stood stage-left to introduce the BBC Concert Orchestra in music from the latest blockbuster from the BBC’s world-beating Natural History Unit: Life Story. All the music is by Murray Gold (no stranger to the Proms given Doctor Who is a regular feature), who also appeared to explain how he gets his inspiration and writes the music (a four-year process in which he is drip-fed short videos, then a three-week dash at the end to complete all the music for six hours of television).

His is a genuine felicitous musical imagination, as orchestrated by Jeremy Holland-Smith, and if the moods of music tend to fit in, broadly, three categories – awesome (cymbal crashes), humorous (calypsos and other dances, with – at times – with three guitars, a ukulele and an accordion) and poignant – he does them very well. Holland-Smith’s scoring is vividly colourful and requires an augmented BBC Concert Orchestra, which rose to the challenge with enthusiasm even though none of the eleven screens around the Hall would have given little sight of the images. 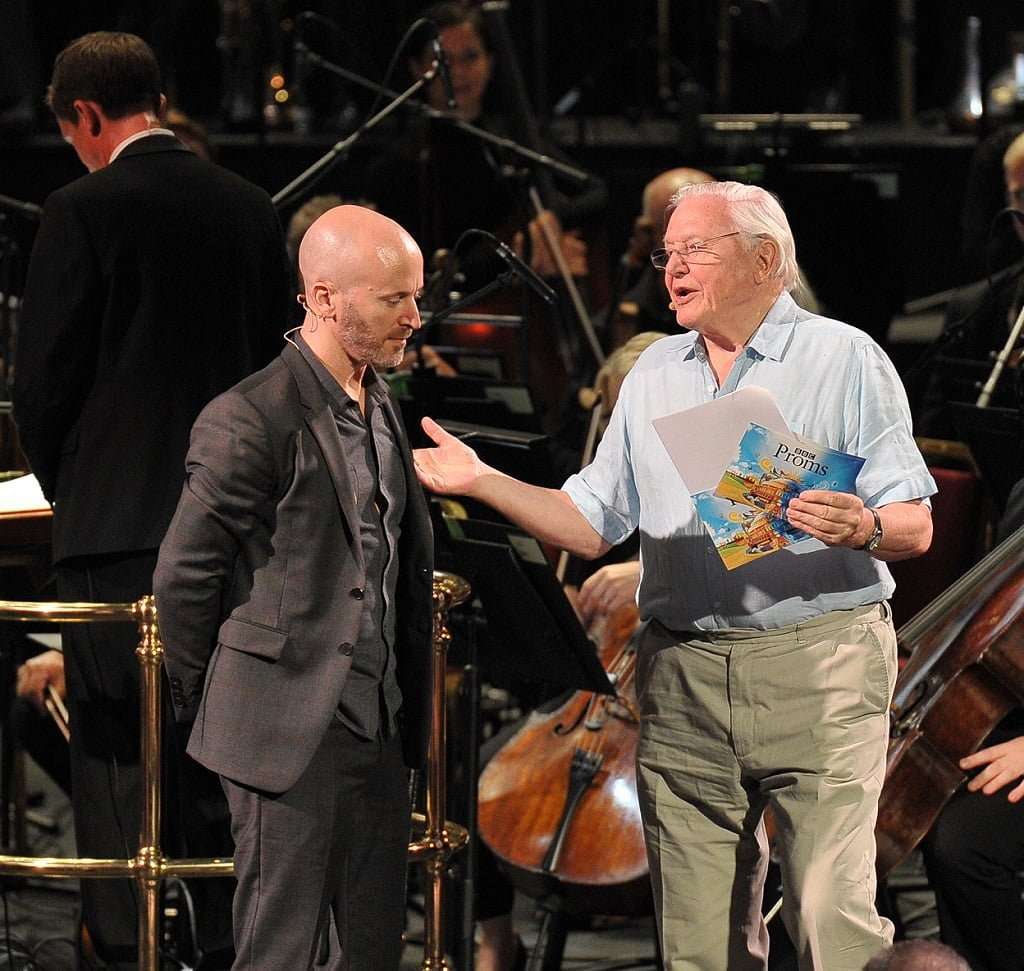 Attenborough’s fluently delivered script (his only error was to stand in-between the third and fourth segments in the second half when there was meant to be a segue straight from ‘Grouse’ to ‘Turtles’ – he realised within in a few words and simply said “I’ve made a mistake” – politicians should perhaps learn something here…) setting the scenes for each of the individual stories, but didn’t give too much away, so with only the music to go on, listeners at home on Radio 3 might have been somewhat mystified. But it worked in the Royal Albert Hall.

While it was abundantly clear that each of the segments were, in some sense at least, anthropomorphised into a human-angle storyline – perhaps best typified by the opening film of the lonesome male albatross waiting for his mate of twenty years to return, balanced by an finale when we learn that she does go back (much beak tapping) – and, with a resultant nagging sense of manipulation, there was much to delight the senses.

The comic timing of Gold’s scores for the octopus tip-toeing across the ocean floor, the dancing grouse trying to attract a buddy, or the curious house-swapping antics of hermit crabs (which reminded me of Shostakovich’s Cheryomushki, which is also about a housing crisis, in Moscow!) were great fun, while the hunt of wildebeests by African hunting dogs and impala by cheetahs were unusual as Gold didn’t clothe these scenes in chase music. 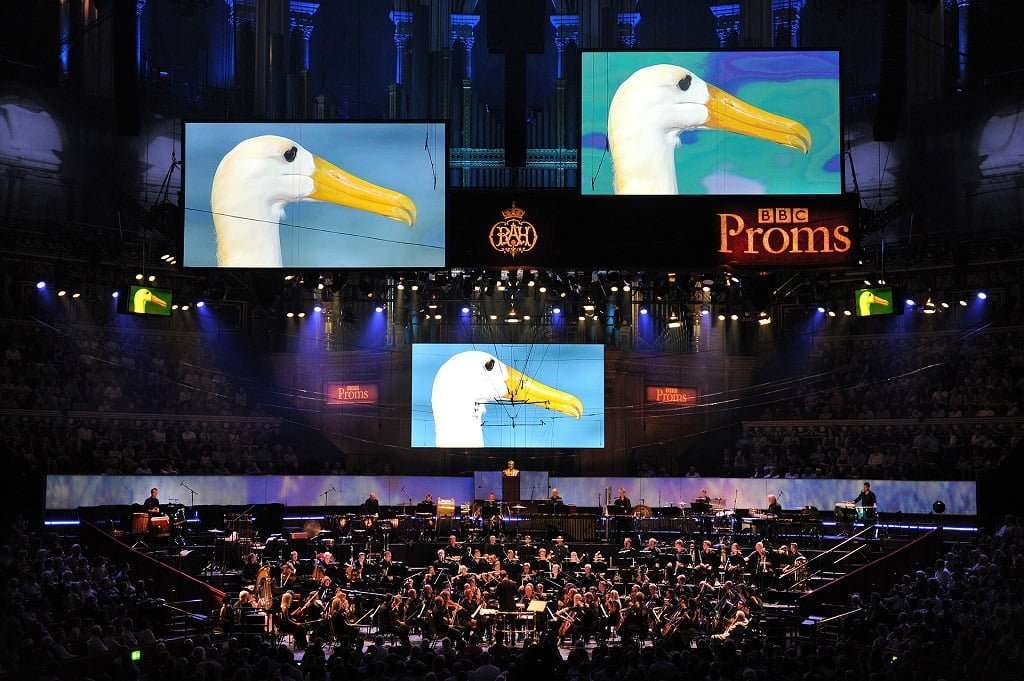 There was macabre humour in the hatching of the mantis brood – some sixty red alien-like insects tumbling over each other – but while one escapes being the meal of a hairy spider it meets it fate in the jaws of an adult, curiously white, sibling. We were also treated to meerkats working together to ward off a cobra, as well as a little Japanese puffer fish that spends days working on a sand garden with an intricate pattern to woo a lady fish, and the concert ended with the majesty of an extended family of elephants who come across the skeletal remains of a brother and, in their gentle exploration of the skull with their trunks, seem almost to recognise its identity. Earlier – mirroring the lonesome albatross – we had witnessed a young male chimpanzee ostracised from the troupe perhaps finding redemption by teaming up with a once-alpha male who could be the youngster’s mentor.

But perhaps most extraordinary were two marine segments: that of the young seal daunted by the sea off New Zealand (not surprisingly, seeing the waiting orca), who finds his way upstream to a pool inland where young seals learn to swim; and then the mating turtles out at sea suddenly attracting a number of other male turtles who then fight to pull the lucky male off his mount. That was the most unsentimental subject – nature at its most natural in fact, with an un-imposed storyline that shocked as much as amazed. The addition of music might render it less realistic, but I think it is a perfectly valid enterprise. Gold follows in a line of film composers who can accompany in sound such remarkable images: that is a talent to be celebrated.

But, it was Sir David Attenborough’s day: Gold gave a eulogy of the broadcaster, before we learnt the fate of the (not-so) lonely albatross and, repeating the Life Story Overture, we had filmic bows from all of the animal stars.