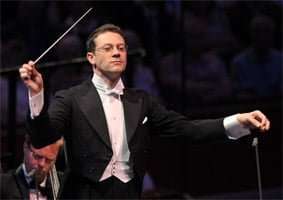 In the balmy hazy days of August, when the searing heat of the summer sun cracks the flagstones, we in Britain have been reminded of California and Hollywood from John Wilson and his Orchestra with Musicals from that Sunshine State. In 2012 it has rained – the wettest summer on record – and so Wilson turned his attention to the East Coast – to New York and Broadway.

Wilson states that the selection here might not be the broadest – but he hopes he is presenting music that will give a fair representation of Broadway from the late-1920s to the end of the 1960s, by which time the heyday of the orchestra pit “full to the brim with musicians” had pretty much come to an end.

Wilson, dressed in white-tie and tails (conductors in black ponchos take note!), set the mark at his usual high standard with a rip-roaring performance of the Overture to Gershwin’s Funny Face, demanding we take this music as seriously as any other heard at the Proms. 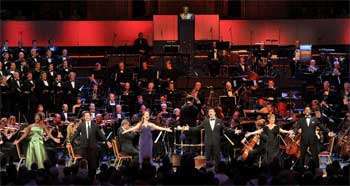 Cole Porter’s ‘Another Op’nin’, Another Show’ brought Anna-Jane Casey to literally open another musical. Four of the six singers have been a part of John Wilson’s journey in recent years – Casey, Sierra Boggess, Julian Ovenden and Seth MacFarlane. Like the 79-piece orchestra (its musicians as smartly attired as Wilson), all the soloists are handpicked. Attention to detail is everywhere; mimicry is required, whether it is Boggess ‘as’ Marni Nixon in West Side Story (she dubbed the part of Maria for Natalie Wood) or Casey as the not quite so inimitable Barbra Streisand (Funny Girl), these performers really do hold up a mirror to a bygone age.

Amplification of the Maida Vale Singers and soloists was subtle but evident, despite John Wilson’s programme note saying how the concert “recalls a period when every theatre on Broadway had an orchestra pit filled to busting with musicians: right in front of the stage, visible to the audience, no amplification required.” Why, however, it was felt necessary to boost ‘Bess, You Is My Woman Now’ is beyond me. This delightful and heartfelt performance by Elizabeth Llewellyn (hot-foot from Opera Holland Park where she sang Fiordiligi) and Rodney Earl Clarke was quite delicious if a little restrained. Both singers are more than capable of holding their own against an orchestra – so, please BBC Proms, reconsider the perceived need to amplify. 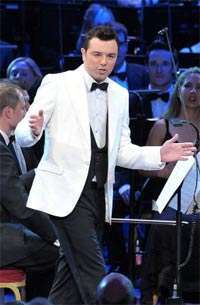 Seth MacFarlane, known best for his animated TV series and Ted, also has aspirations as a singer placing himself in Frank Sinatra territory. He does it reasonably well – his 2011 debut album (Music is better than words) received two Grammy nominations and includes a duet with Norah Jones. Here he was described as a baritone (in 2009 as a vocalist) and the choice of music worked much better for him. Meredith Willson’s ‘Ya Got Trouble’ was delivered with easy comic timing. The proposed film version of Frank Loesser’s Most Happy Fella considered both Pavarotti and Sinatra for the lead character. MacFarlane’s performance sided with Sinatra and it felt comfortable.

Although the show-tunes were not completely unfamiliar, the ‘greatest hits’ format was studiously, and thankfully, avoided. The scene from Show Boat that starts with a meeting between Gaylord Ravenal and the captain’s daughter Magnolia – the duet (‘Make Believe’) and ending with ‘Ol’ Man River’ was captivating. The bell-like purity of Boggess’s voice combined with Julian Ovenden’s full-bodied tenor (almost a baritone) was a high point among many. ‘Ol’ Man River’ was not the best choice for Rodney Earl Clarke who, as a bass-baritone struggled with the very low tessitura; Jerome Kern wrote it for a bass voice.

The ballet ‘Slaughter on Tenth Avenue’ occurs near the end of Rodgers & Hart’s 1936 musical On Your Toes. Together with another (un-danced) ballet, from Leonard Bernstein’s On the Town, the capabilities of the John Wilson Orchestra were shown off magnificently.

Soloists picked from The Maida Vale Singers took a prominent part. In ‘The Lusty Month of May’ four females joined Boggess who, singing the role originally sung by Julie Andrews, extolled the virtues of May Day. Four men explained their extravagant lifestyles by way of a ‘Little Tin Box’.

As always in a JWO concert, unexpected treasure is to be found. Here it was in ‘Come Home’ from Rodgers & Hammerstein’s Allegro. The musical was a flop but the simplicity of Rodgers’s step-wise melody followed by a yearning leap at the end makes it a real winner. Most Broadway shows end with a rip-snorting finale; here was no different with a fantastically overboard performance of ‘Mame’ from Jerry Herman’s 1966 eponymous musical. Starting quietly with a tinkering banjo the music gradually speeds to a whirlwind with a melody so memorable that late-night revellers have hijacked. The performance here was much less raucous though every bit as enthusiastic.

The final piece programmed was never likely to be the last piece, particularly as the listed tap-dancers had not yet performed. Anna-Jane Casey had enough time for a quick change of costume before returning with fourteen tap dancers, for a stylish, Josh Prince choreographed performance of ‘Tap your troubles away’ from Jerry Herman’s Mack and Mabel. Casey, a seasoned Mabel, gave an energetic, no-holds-barred rendition that raised the roof and brought the Prom to a tumultuous conclusion.