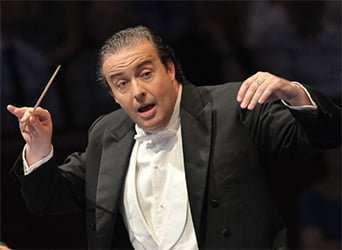 On its first outing, David Matthews’s A Vision of the Sea (2013) made a big impact. Impressively scored for a standard large orchestra, including harp and piano, this 22-minute symphonic poem is engaging on a purely musical level as well as a suggestive one. From its mysterious opening to a conclusion that seeks no easy resolution, leaving the listener (this one anyway) with the impression that dangers remain lurking in the depths, Matthews has filled his score with much engaging invention, sometimes with a nod (intended or otherwise) to Ralph Vaughan Williams; whether subtle and evocative, richly melodic, pictorial (including the onomatopoeia of gulls), or tempestuous, so lucid is its design that A Vision of the Sea could be described as a ‘symphony in one movement’; the trill-encrusted climax was thrilling. This first performance seemed wholly excellent, the composer, recently turned 70, and very much in the English romantic tradition, appeared very happy with the result. 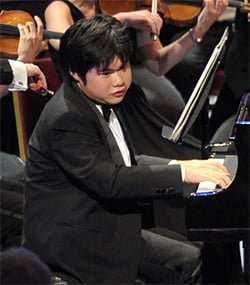 The 24-year-old Japanese pianist, Nobuyuki Tsujii, has been blind from birth. Quite how he studies and learns the repertoire he plays, and also so effortlessly locates the keys he needs to negotiate, is to be wondered at. His opening solo of the Rachmaninov (so associated with David Lean’s film of Brief Encounter) was expectantly solemn, with no split chords, and he went on to give a sparkling, considered and very musical account, neither pushy nor dominant. He was sensitively and tactfully accompanied, save that the brass was often too loud, and the cymbals crashes in the finale were crude. (Les Siècles much missed!) Juanjo Mena was a caring steward when helping Tsujii to walk on and off the platform. The pianist offered an encore, a dashing and ringing ‘La campanella’, the third of Liszt’s Paganini Etudes.

Balance problems also blighted Nielsen’s ‘Inextinguishable’ Symphony, which at its brassiest (quite often) these instruments blared and obscured much detail from elsewhere in the orchestra. Although Mena (the BBC Philharmonic’s Chief Conductor) had worked things out painstakingly, his tempos proved too deliberate, undermining the music’s thrust. If there were some engaging moments – the woodwinds in the second movements, the solo strings in the third, and some splendid timpanists in the finale – a generally rather studied approach to the work made it less engaging than usual (and Nielsen 4 is a masterpiece), the implication being that Mena likes the music’s surface but is indifferent to the composer’s life-enhancing inspiration and indestructible intentions. Two years ago at this address, Sakari Oramo conducted the Stockholm Philharmonic in a fully identified-with reading that found the mind wandering back to then and to how engrossing and uplifting this music can be.