Howells
Hymnus Paradisi
Elgar
Symphony No.1 in A flat, Op.55 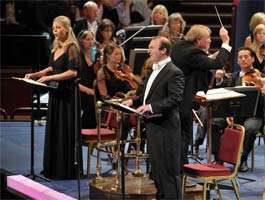 The programme book described Herbert Howells’s Hymnus Paradisi (first heard in 1950) as “an established fixture of the English choral repertoire”. If only that were the case – this wonderful, mystical piece, although much admired, is rarely heard in the concert hall, at least when compared with similar scale works by Vaughan Williams, Britten and Walton. 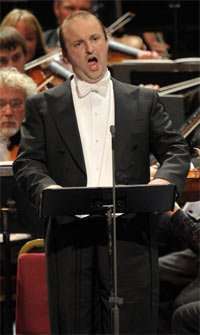 Hymnus Paradisi makes great demands on all the performers, not least the chorus, the driving force behind the piece, and the conductor, who has to help everyone find their way through some incredibly dense textures. There is something peculiarly un-English about Howells’s vision. For sure there are hints at the early church music so loved by the composer, but his private, cathartic response to the tragic death of both his nine-year-old son and his closest friend, Ivor Gurney, brings not reserve, but rather a devastatingly personal document that contrasts the depths of despair, questioning the very meaning of life, with a blazing, dazzling affirmation of faith. Howells composed Hymnus Paradisi between 1936 and 1938, withholding it from performance for many years. 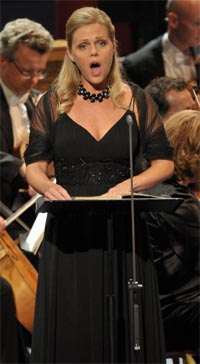 The beautifully still opening was disturbed somewhat by the Proms resident consumptive brigade, but in some way set the pattern for the evening – confident, focused and enthusiastic singing from the combined choirs, taking us on a journey from troubled darkness to a vigorous, ecstatic apotheosis. All the words were clear, Howells’s long sinewy lines sounded natural and unforced, and the choristers even managed to avoid the cardinal sin – beginnings and endings of chords and phrases not being together, which seemed to be a problem for the orchestra; sad to report that many chords were just not precise enough. Miah Persson soared over the combined forces with ease and Andrew Kennedy’s ‘I heard a voice from Heaven’ cannot have failed to stir even stoniest of hearts.

Martyn Brabbins certainly gave every indication of loving the music; it was a little safe though and a bit more breathing space as Howells’s magical cadences were reached would have been welcome, and more fervour and Janáček-like abandon in the ‘Sanctus’ too. But, I do wish he had done something with the final bars! The music dies away to leave the cello line that we heard at the very beginning, this time with an organ pedal – but the horrible noise we heard was certainly not what the composer had in mind, more akin to a jet taking off than consolation and peace. At the end of the performance Brabbins waved the score at the audience – as well he might! It’s bizarre to think that Hymnus Paradisi has taken over 60 years to reach the Proms.

By contrast, Elgar’s First Symphony is hardly an infrequent visitor at this Festival (Boult alone conducting seven performances). Brabbins is an admired Elgarian – thankfully taking a more European view of Elgar than parading the usual swaggering Edwardian clichés. Some very occasional ensemble worries aside, the BBCSO found its feet, with some very fine solo wind playing (particularly from clarinettist Richard Horsford), Brabbins assuring good balances and lucid textures. The scherzo was a little short on demons but was energetic and reminded us, if needed, what breathtaking command of the orchestra Elgar had. The slow movement, the emotional heard of the symphony, was beautifully played with great care and tenderness at a true Adagio pace. The last movement had much to admire, but ran out of steam a little towards the end so that the return of the ‘motto theme’ which should be overwhelming, was a little less so.

Nevertheless, to hear these two great works together made for a very rewarding Prom.