“Thrilling California-based saxophonist and composer Kamasi Washington has been described as the biggest thing to hit jazz for years. Having toured for over a decade with artists such as Herbie Hancock, Lauryn Hill and Snoop Dogg, he now brings his own band to the Proms, combining with the strings of the City of Birmingham Symphony Orchestra, along with choral backing, to perform tracks from his groundbreaking recent three-disc album The Epic.” [BBC Proms website] 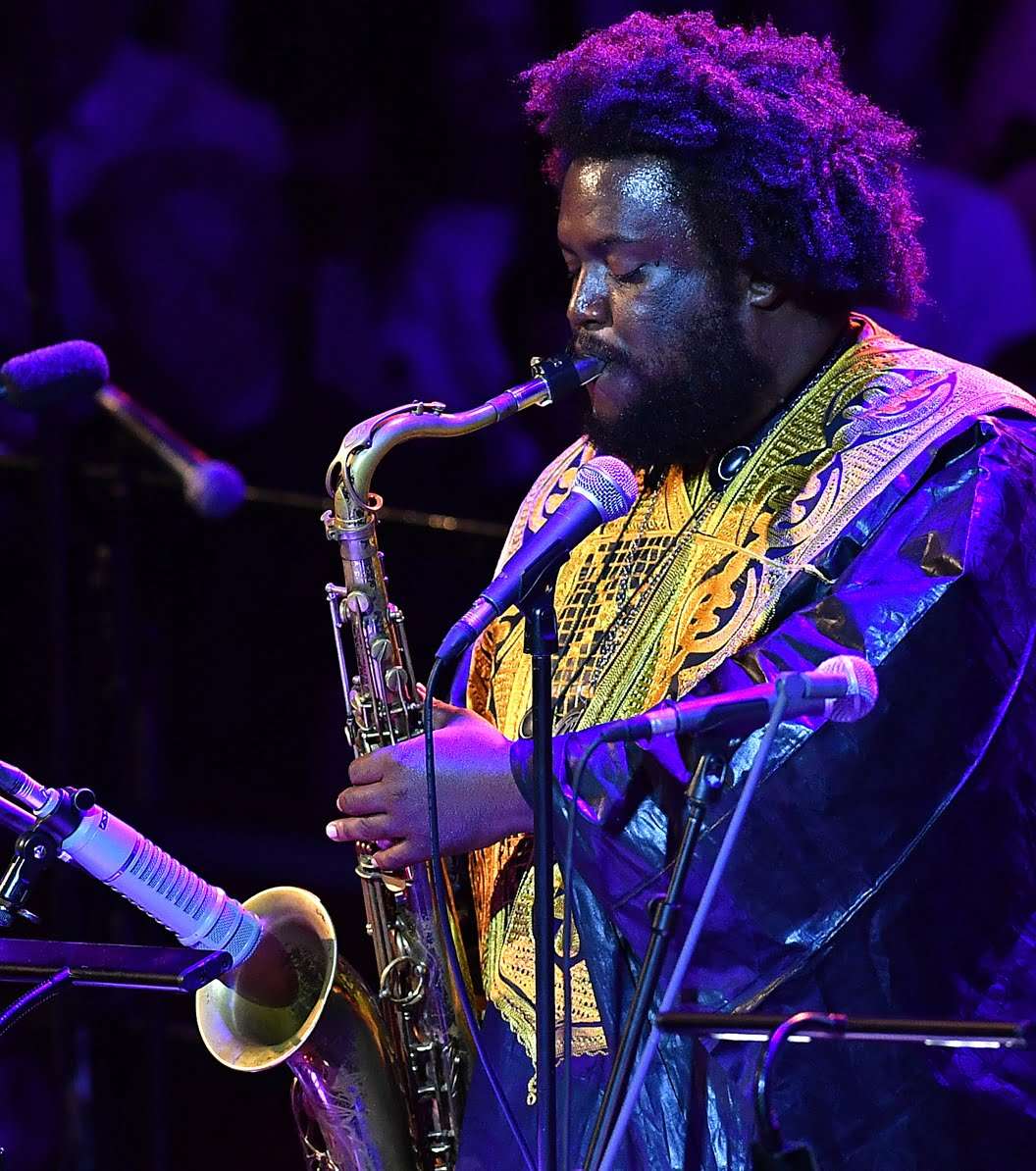 Kamasi Washington might not have been the most obvious artist for the Proms, yet the success of the triple album The Epic certainly propelled him to the forefront of the current jazz scene, making him a shoe-in for the Royal Albert Hall following high-profile gigs at last year’s London Jazz Festival and Glastonbury this year. With his seven-piece band of virtuosos, things were set for a late-night Prom such as threatened to burn-up a venue by no means unaccustomed to roof-raising sets from non-classical performers.

With nearly three hours of tracks to choose from, possible sets-lists to be drawn from The Epic are endless, though launching with ‘Change of the Guard’ set the tone for what was to follow – thus high-octane if rarely showy soloing from Washington and his band, backed by mantric vocalise from the T. O. P. Gospel Choir and lush string textures courtesy of the CBSO.

Epic it assuredly was, but also unrelieved in its textural density to an extent that the interplay between band members became submerged in a wash of sound as swirled around the auditorium with precious little sense of aural definition. Maybe rather fuzzy amplification was partly or even largely to blame, yet some of this was due to the overreaching ambition of this music less in terms of its content than its conception.

Moving on to ‘The Next Step’ with keening solos from Washington and the trombonist Ryan Porter, underpinned by the scorching pianism of Brandon Coleman (itself a constant highlight), though its impact was once again lessened in the context of voices and strings that enfolded without really intensifying their contributions. Hers was frequently merely a gestural presence, but vocalist Patrice Quinn brought warmth as well as elegance to the blandishments of ‘Henrietta Our Hero’; a sincere eulogy to Washington’s grandmother equally graced by the understated flute of his father Rickey. If the next piece had a more restrained ambience, there was no lack of incident as the solos came thick and fast – goaded on by the dextrous bass of Miles Mosley and heady rhythmic interplay of drummers Ronald Bruner Jr and Tony Austin. 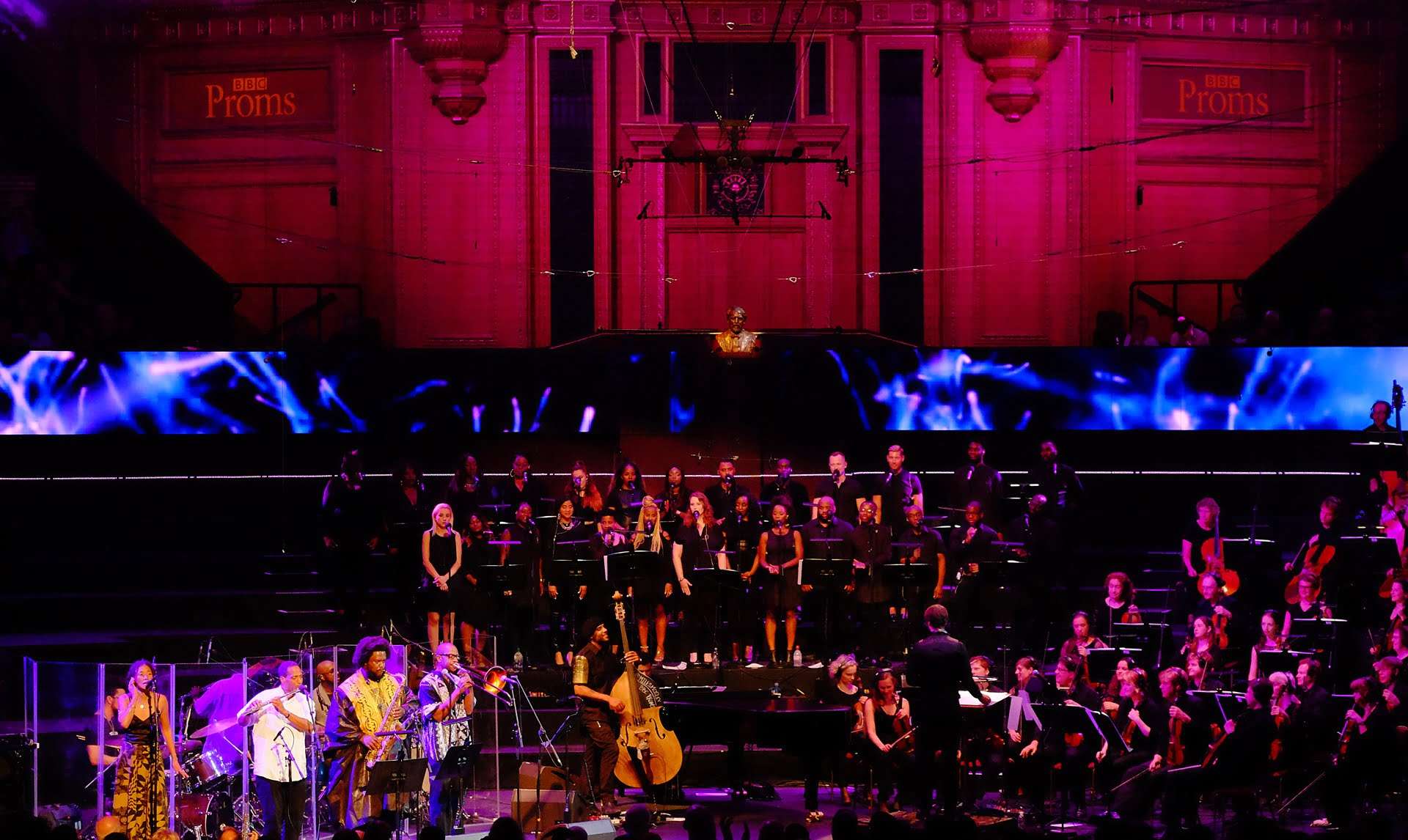 A further vocal number followed in ‘The Rhythm Changes’, Quinn’s imploring singing rather overawed by choral chanting that skirted monotony (Washington has spoken of Stravinsky’s Symphony of Psalms as an influence that could have been more resourcefully deployed). There followed a premiere – ‘The Space Traveller’s Lullaby’, in which the band was heard to often hypnotic effect as its playing infused the RAH ambience. Energy levels were duly upped with a flood of blistering solos on ‘The Magnificent 7’ which rounded off the night.

Make no mistake, Kamasi Washington and his band are a force to reckon with – musical, and for many of the capacity audience, spiritual. Nor was there any doubting the commitment of choir and strings in their response to Jules Buckley (seemingly on course for setting a new record of Proms appearances). Doubts remain as to the intrinsic substance and individuality of what was heard, but a sense of occasion carried this set through to its conclusion with an encore of ‘Re Run Home’ as saw those present locked into a groove of surging propulsion.