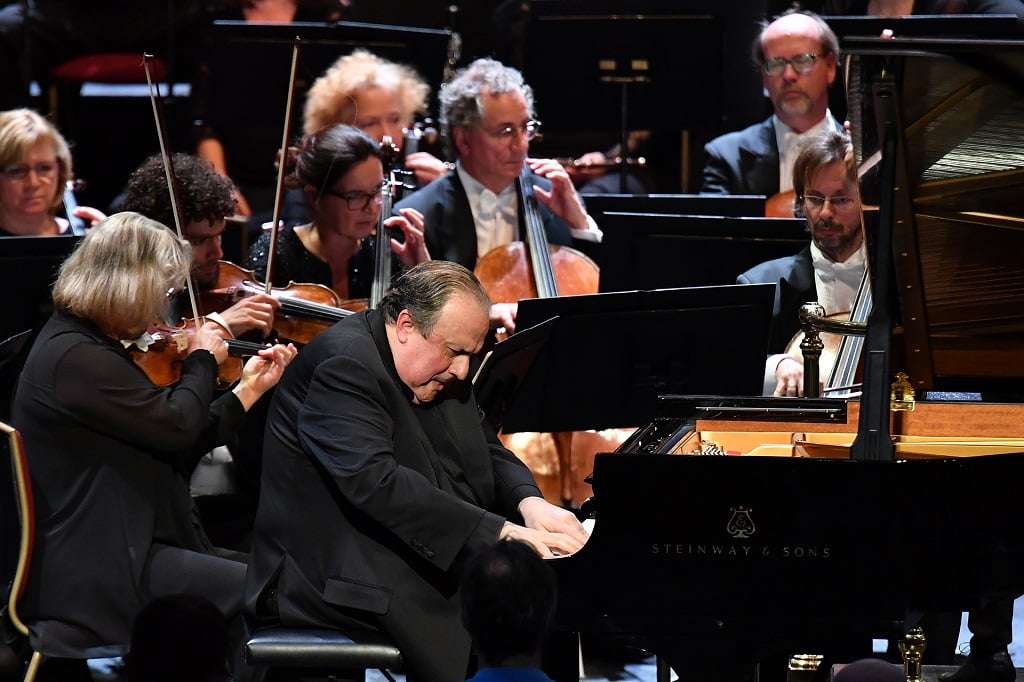 When a Bruckner Symphony is the main work it is the modern trend to throw in a Piano Concerto – often by Mozart and hardly ever is an ‘overture’ offered.

Liszt’s Second Piano Concerto has no obvious connection with Bruckner but it could be described as ‘symphonic’ being in one movement with sections pertaining to those of a Symphony, and Denis Stevens described it as a symphonic poem. It has many virtuosic demands for the soloist although Liszt employs them more subtly than in his earlier E-flat Concerto. Yefim Bronfman displayed his understanding of Liszt’s varying effects as he responded to the gentle orchestral themes of the slow introduction which are fiercely broken up as the Allegro agitato approaches and the piano takes over. The dialogue between pianist and orchestra is often quite stormy; Bronfman has the power to display Liszt’s challenging writing and the technique to conquer all that is demanded and in what could be described as the slow movement, he employed contrasting dynamics most gracefully. The conclusion features a quiet cadenza followed by reminiscences of previous themes and, aided by cymbals for the final fifty bars, conductor and pianist clearly felt that the most suitable approach should be one of forceful brilliance. 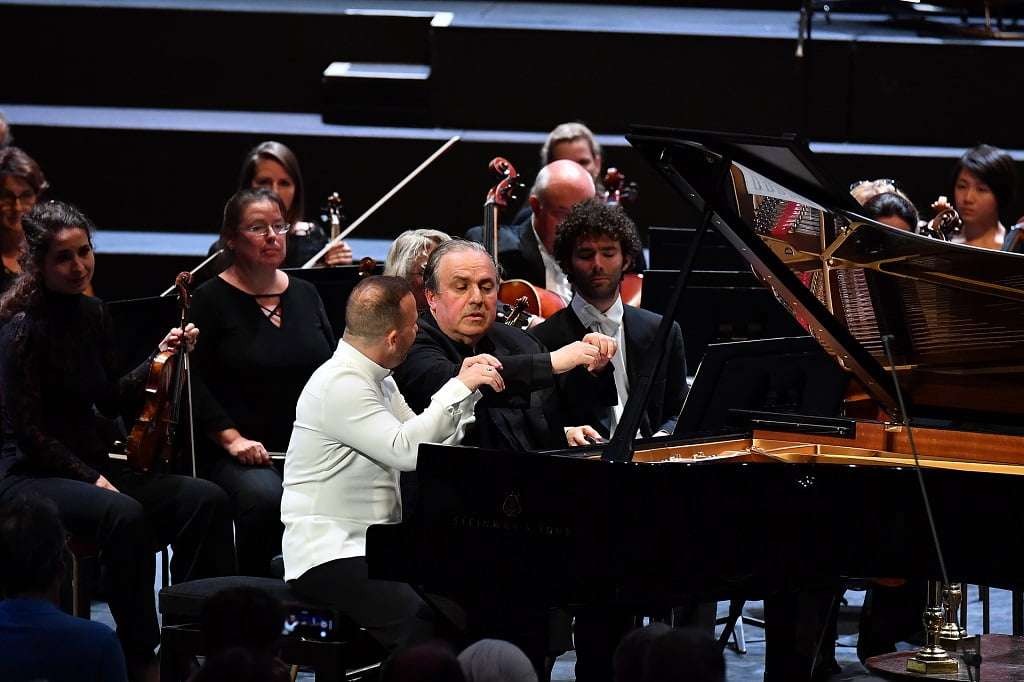 Gentility then returned when they sat at the keyboard to play, as an encore, ‘Venetianisches Gondellied’ Mendelssohn’s duet arrangement of the fifth of his Opus 65 set of Songs without Words, a calm, softly rhythmic Gondolier’s Song.

When a Bruckner Symphony is performed, the question of edition must be addressed. In the case of Symphony 4 it is not too complicated. By 1878 Bruckner had satisfactorily revised the 1874 original and in 1880 greatly altered the Finale. Yannick Nézet-Séguin used the reliable publication by Robert Haas.

At the magical horn-call with which Bruckner’s Fourth opens, the concert entered another world. The programmatic description sometimes applied to the music involving mediaeval scenes, knights, castles… probably has little to do with Bruckner although the Scherzo does suggest a hunting scene. Nevertheless Nézet-Séguin’s broad reading of the first movement gave a feeling of timelessness and when the horn theme quietly returned accompanied by beautiful woodwind elaborations I could accept the fanciful notion that the music was emerging from an ancient forest. This performance of great breadth featured the quietest of playing from the strings. The unhurried approach was justified by steadiness of tempo – no undue relaxation for reflective moments, no hurrying at climaxes, just a flow which enabled the colourful sound of this fine orchestra to add eloquence to Bruckner’s fully-scored statements. 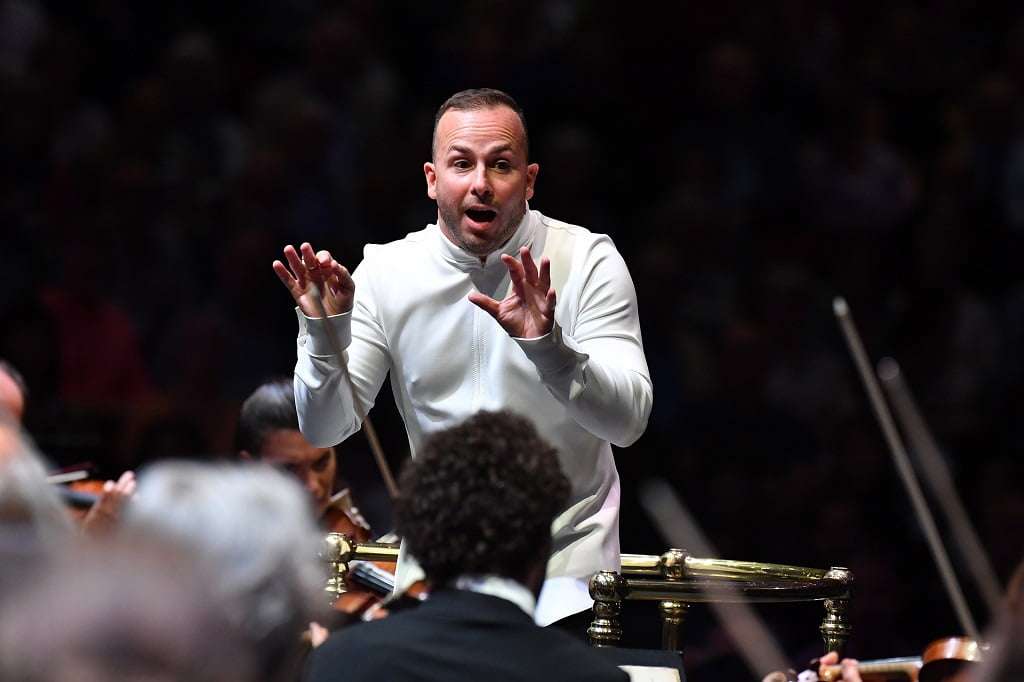 The same steadiness of pace was afforded the Andante quasi allegretto which was given its essential march-like element; again there was admirably soft string-playing but had the pizzicato accompaniments been louder the admirable firmness of pulse might have been stressed even more clearly. In the Scherzo Nézet-Séguin did allow relaxation for a gentler passage but it meant that there was added excitement as it built from thoughtfulness to the brilliance of the coda. The Trio, required by Bruckner to be slower, was represented as a very peaceful episode. The fragmentary nature of the Finale involves differing rhythms in its several episodes so an all-through sweep is not really possible but all the themes were sensitively crafted and although each climax glowed strongly, the conductor reserved full power for those which are the most dramatic; the coda, taken at a daringly slow pace, being the most exciting of them all. The richness of sound was a credit to the Rotterdam Philharmonic, the horns being particularly magnificent.

Nézet-Séguin shortly relinquishes his ten-year Rotterdam tenure, heading for the Met, and added a thoughtful extra, the Prelude to Act Three of Verdi’s La traviata.