“Twenty-six years after his first Proms appearance, with his big band Loose Tubes, jazz pianist and composer Django Bates returns with his own trio in a new partnership with the Grammy-nominated Norrbotten Big Band from northern Sweden. Together they present a celebration of Charlie ‘Bird’ Parker – bebop pioneer and beloved hero of Bates – adding their own spin on Parker classics such as ‘Confirmation’ ‘Scrapple from the Apple’ and ‘Donna Lee’, interleaved with Bates’s own compositions, fast becoming part of the jazz canon.” [BBC Proms website]

All arrangements by Django Bates 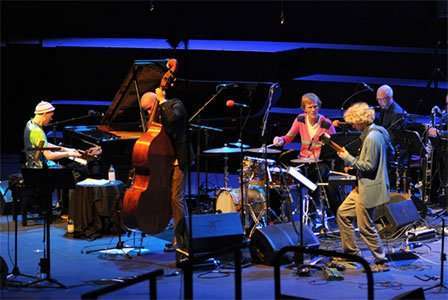 It hardly seems 26 years since Django Bates brought Loose Tubes to the Royal Albert Hall for a late-night Prom which, reckless even by the standard of that most unpredictable of big-bands, gave notice of the executive health of British jazz in the 1980s as well as the creative zeal of one of those ‘young lions’ who took the UK music scene by storm during that decade. Bates has been a constant presence ever since and, if his musical vision now seems less radical, this in itself underlines his sheer consistency whether as composer, arranger or bandleader. Proms 2013 found him in action as part of his trio Belovèd, together with the Norrbotten Big Band, in this celebration of one of the seminal figures in post-war jazz.

The programme was well chosen to reflect both the potency of Charlie Parker’s select though influential output and that of Bates’s recent compositional ventures. Certainly Parker’s ‘Confirmation’ made for a scintillating curtain-raiser, not least in its showcasing the imaginative interplay between trio and band, then a songful arrangement of the David Raksin/Johnny Mercer standard ‘Laura’ allowed for a notable measure of soloing from among what is in any case an orchestra of soloists. The set duly reached an initial high with Parker’s own inimitable ‘Donna Lee’ – its stabbing off-beats and unbridled rhythmic incisiveness an open invitation to the musicians, not least in the unerringly controlled disintegration of the closing stages. 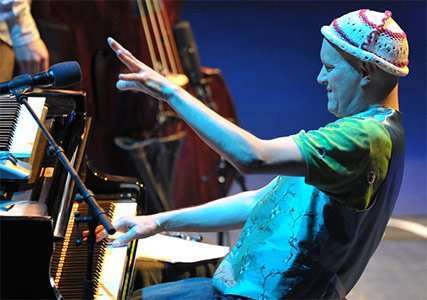 Next (earlier than might have been imagined but none the worse for that) was a first UK outing for Django Bates’s The Study of Touch (2012) – inspired by a ‘‘simple diatonic loop’’ (to quote the composer) which was made the basis for this enticing dialogue centred on the formal and expressive possibilities of nuance, featuring a visceral soprano sax solo from Håkan Broström and a stealthy tenor sax input from Karl-Martin Almqvist. After which, ‘Ah-Leu-Cha’ came as a perfect foil – this most fluid and enigmatic of Parker’s compositions yielding both style and substance, not least in Bates’s teasing recourse to microtonal piano (one of several unobtrusive uses of this keyboard during the course of the evening).

This oblique sense of mystery continued with Bates’s ‘We Are Not Lost, We Are Simply Finding Our Way’, brought gently to earth by a deadpan trombone solo from Peter Dahlgren, before fellow trombonist Ashley Slater stepped forward for the single vocal item – a distinctly off-the-wall version of the Hal David/Burt Bacharach classic ‘A House is not a Home’ with its smouldering preamble on bowed guitar (just one instance where Markus Pesonen made his edgy presence felt) and a contribution from Slater that, starting flat and straying on the wrong side of gritty, did not find this enterprising performer at his best. Not a disaster by any means, though not the expressive highpoint its context might have intended.

Time seemed to be running short, but some quick introductions from Bates ensured that the advertised programme was heard in full. Parker’s ‘My Little Suede Shoes’ featured in an arrangement that made the most of its ‘jazzy’ ebullience, and in which Bates took time out from his keyboard duties for a quick dance (or even two) in the Arena, while the Gene de Paul/Don Raye standard ‘Star Eyes’ proved suave and languorous by turns. It rounded off what must be one of the most enjoyable (and certainly best attended) ‘late-nighters’, and left one with the hope that it will not be so long before Bates returns to these concerts, perhaps with a full-scale BBC commission.