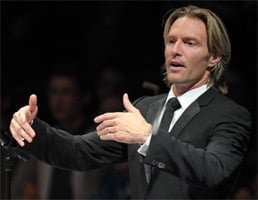 There can’t be many occasions when the very mention of the name of the featured artist results in whoops of excitement from the audience and a pop-star welcome. Such greeted Eric Whitacre to clearly indicate the effect that he has had on the sometimes insular world of choral music. Whatever one might think of the music itself, or indeed Whitacre’s capabilities as a conductor, anyone that popularises choral music and communicates in the way he has done has to be a good thing.

Given that Whitacre was provided with a ‘Rolls-Royce’ choir made up of some of the best professional choral singers in London, if not the UK, one could safely assume that the standard of performance would be high – which indeed it was. The long phrases, multi-divided textures, gentle dissonances and characteristic added-note chords of his own music can rarely have sounded better, though hearing five of his pieces in quick succession only underlined the suspicion that they have been mined from the same coal-face. 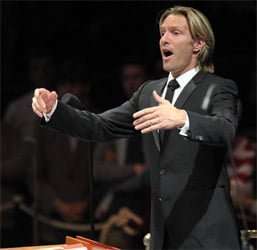 After a short ‘Warm-Up’ taken from Leonard Bernstein’s Mass, we heard Alleluia – a recent transcription of a piece for symphonic winds, written for the Choir of Sidney Sussex College where Whitacre has been Composer in Residence since 2011. A tapestry of mellifluous solo lines floating over modal harmonies, it follows the expected Whitacre course. The new piece by Imogen Heap took longer to explain than it did to perform – ensemblebash and Hila Plitmann (Mrs Whitacre) gamely providing a rather toe-curling dancing and clapping routine to ‘accompany’ a pointless text and an equally pointless collection of notes sung by Heap herself, whilst the choir provided bland harmony. Things picked up a great deal with three spiritual arrangements by Moses Hogan, whose tragically early death at the age of 46 robbed the American choral scene of one of its most vibrant and popular figures. Wonderfully sung and wonderfully arranged.

Whitacre’s new piece, Higher, Faster, Stronger (derived from the Olympic motto “Citius, Altius, Fortius”) may well, as the composer explained, be the most difficult choral piece he has yet written, but was a disappointing collection of Bernstein-like riffs against active percussion. Not something that will take off in the same way as two ‘classics’ – Leonardo Dreams of his Flying Machine, an imaginatively programmatic choral tone-poem, setting excerpts from Leonardo da Vinci’s sketchbooks, and Cloudburst, a vivid evocation of a storm, setting a poem by Octavia Paz. One would be hard pressed to imagine a more committed and arresting performance.

The advertised programme finished with a rather magical performance of another Whitacre ‘classic’, Sleep. Bizarrely, Charles Anthony Silvestri’s text was written to fit the music when legal wrangles with the publisher of the originally planned text proved impossible to solve. Still, it manages to sound completely natural, and the music is direct, unpretentious and rather touching. More pleasing was the true, beautifully sustained pianissimo from in the closing bars and the deadly quiet audience.

There was a short encore, by John Corigliano after Bob Dylan – which gave Plitmann to shine again alongside the choir.