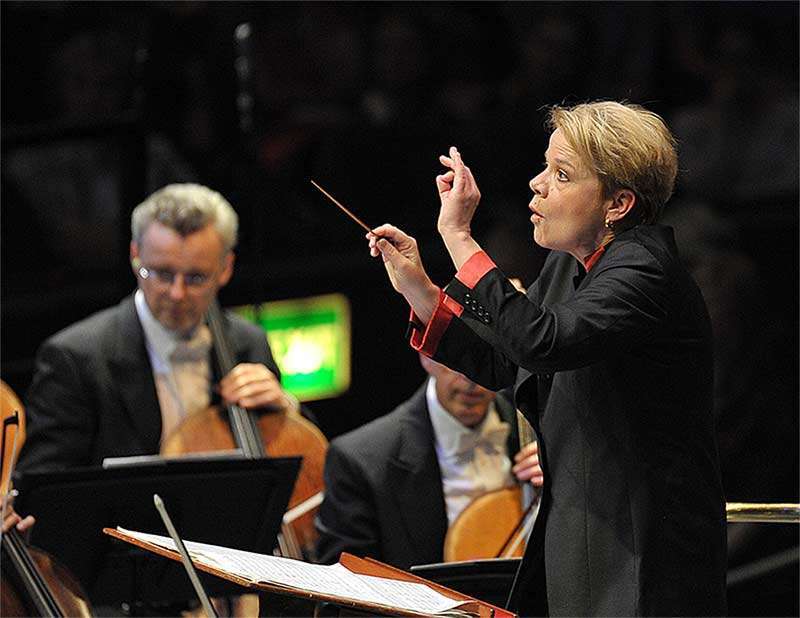 John Adams’s Short Ride in a Fast Machine finally received its first outing in a Prom, having previously been removed from the schedules at short notice in the 1997 and 2001 seasons for reasons of sensitivity – namely the death of Diana, Princess of Wales and then the terrorist attacks of 11 September 2001 (‘9/11’). Marin Alsop and the BBC Symphony Orchestra proved its ideal vehicle, this punchy performance led off by a strong woodblock pulse. A colourful and rhythmically vital account, this particular machine stayed on the rails as the scenery rushed past.

There followed a substantial new work from Adams, the Saxophone Concerto (2013), arguably the biggest yet (around 27 minutes) written for the instrument and orchestra. In an interesting programme note, Adams lamented the instrument’s scarcity within classical performance, its integration into classical music “a slow and begrudged one” – with only concertos by Richard Rodney Bennett (for Stan Getz), Glazunov and Villa-Lobos, plus Debussy’s Rapsodie, springing to mind. Adams goes on to mention two jazz records he had listened to during composition of the Concerto – “Charlie Parker and Strings” and Stan Getz’s “Focus”. 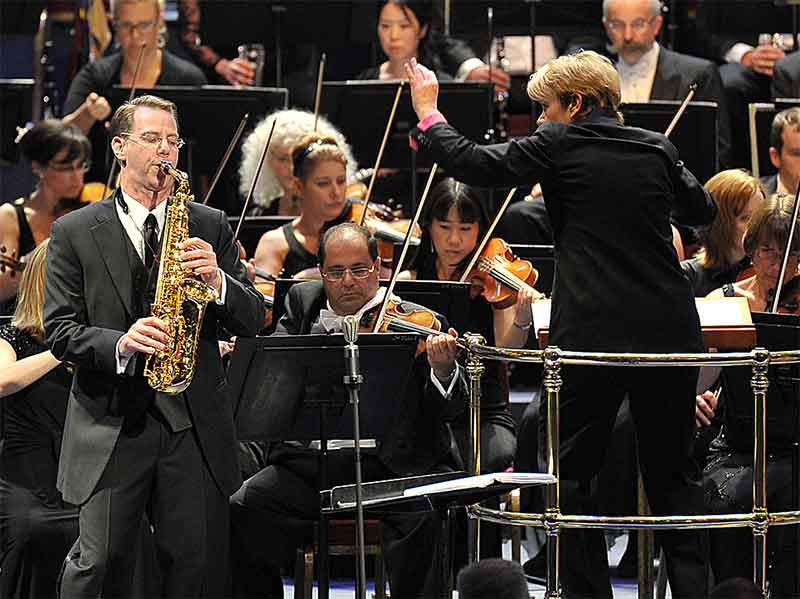 The virtuosic writing makes uncompromising demands on the soloist, challenges to which Timothy McAllister rose most impressively, maintaining a fullness of tone where Adams’s writing is lyrical while handling some incredibly difficult fast passages with commendable ease and clarity. For a work inspired more directly by jazz it was curious to note the complete absence of a percussion section, save for a piano within the orchestra, and there were moments in the finale, described by the composer as a “funk rondo”, where a drum kit would perhaps have added additional rhythmic impetus.

An essentially through-composed work that does not in any way conform to the ‘minimalist’ label, the Concerto begins by concentrating on a distinctive rising-note motif through the orchestra. The lengthy but tightly structured first movement did not outstay its welcome, for the dialogue between saxophone and strings in the tranquillo sections have an appealing frankness, enhanced by pure-toned responses from clarinettist James Burke. A wider perspective to the orchestral sound was supplied by subterranean cellos and basses, often pizzicato to give a more definite pulse or to stress syncopations. These supported lightly brushed violas and violins, an orchestration worthy of the pens of Ravel or Stravinsky. McAllister paid subtle homage to Parker and Getz in his solos, often independent of the orchestra, while Alsop coaxed out the syncopations of the finale, with brass adding incisive reports. On first evidence Adams has enriched the sparse repertoire for the saxophone with an impressively argued structure.

In the second half, conducting from memory, Alsop literally danced her way through Mahler’s First Symphony – the only one she has yet committed to disc (for Naxos). This was the base of her persuasive interpretation, at its centre an attractive second movement Ländler, the bass strings encouraged to drag their feet in the third bar of their introductory loop. The third movement – the slow one ostensibly, ‘Frère Jacques’-based – enjoyed its march-past despite the funereal content. It is gratifying to report the use of a single double bass for the opening solo, as Mahler requests (some conductors use the whole section!), thus keeping the simplicity of the folk melody. Christian Geldsetzer found just the right tone of desperation, though there were some less-certain notes in the brass.

Alsop took the first movement’s marking of Immer sehr gemächlich (always very leisurely) at face value, and having painted a vivid picture of the enchanted forest, her subject took a very amiable walk among the trees, strings pausing to enjoy the view, woodwinds the very definition of ‘relaxed’. Alsop also enjoyed Mahler’s chamber-music craft within the context of a large symphony orchestra, and although ensemble within the strings was a little approximate as the first movement established its early climactic points, guest-leader Laura Samuel led with typical panache. The tumult of the finale was suitably arresting, leading ultimately to triumph – whereupon Alsop ushered the horn section to its feet, again Mahler instructs.

Before the second half began, Marin Alsop was presented with Honorary Membership of the Royal Philharmonic Society by composer Colin Matthews, who praised not just her musicianship but her work with women and young musicians. Alsop, in response, gave a short but dignified speech whose sentiment urged recognition of creativity and excellence that would lead ultimately to greater tolerance in the wider world. How right that felt, her point made whole by the uplifting Mahler that followed.