This second concert of Berliner Philharmoniker’s latest visit to the Proms comprised two works that were completed in just over a century of each other. Whether there were any more significant connections is another matter, though it is worth recalling when, discussing his concept of symphonic form, Witold Lutosławski cited those by Brahms as the approach he had consciously avoided because of an intentional emphasis on the outer movements. Perhaps even the latter composer was aware of this in writing his Second Piano Concerto (1881), as the expressive weight here falls on the first two movements, with those that follow bringing an intimacy of manner and transparency of texture more often associated with the chamber domain. 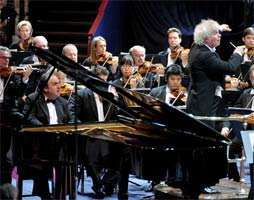 Certainly there was little, if anything, which was overbearing about this account – the piano’s initial entry borne aloft by some effortless horn playing (though such was not to be taken for granted thereafter), and the first movement as a whole evincing an eloquence for all that tension tailed-off noticeably during the curtailed reprise prior to the resolute coda. The second movement was more problematic in that the impulsiveness of Yefim Bronfman was not always complemented by Simon Rattle’s seemingly inert response in, for instance, the quixotic central trio, yet any such disparity was not evident in the Andante with its soulful response from cellist Ludwig Quandt, if again with a fleeting sense that the movement’s rapt intensity was not being evenly sustained. After which, the finale felt overly straight-laced with its main theme not ideally genial then the alternating suavity and limpidity of its episodes a little too impersonal. Nor did the ending quite resolve matters, soloist and conductor seeing the work home to a lively if slightly provisional conclusion. 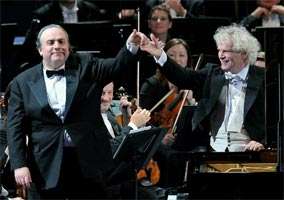 An enjoyable though by no means revelatory reading, then, from a pianist who rarely gives a poor performance, if equally rarely an inspired one, and a conductor who still sounds not entirely at ease with this music. The Berliners were not at all tentative or under-rehearsed, yet there was at times a curious sense of detachment to their contribution which had all but vanished after the interval. Rattle championed Lutosławski’s Third Symphony (1983) assiduously during his Birmingham tenure, but an oddly lacklustre account in his Towards the Millennium series suggested that that commitment might be over. Whatever, this performance amply confirmed his advocacy in one of the seminal works of the late-twentieth-century.

As in many numerous other of Lutosławski’s later works, the sequence of an introductory followed by a main movement ensures a cumulative overall momentum as brings the work full-circle. Rattle was unafraid to risk a degree of disengagement in the initial sequence, the defining four-note ‘motto’ marking off sub-sections in which musical tension is purposefully allowed to dissipate prior to the ringing resumption of the motto at the start of a main movement whose first half brings some of the most combative interplay between the combustible nature of Lutosławski’s aleatoric passages and the melodic consistency of his linear writing. Rattle handled the heightened culmination superbly, and while the ensuing span of eloquent string threnodies and whimsical asides from wind and percussion could have been even more pointedly defined, the gradual build-up to the work’s coda and its dispersal of tension in the astounding final bars were unfailingly well conveyed – not least the arrival back at the note E for a final reiteration of the motto in a thrillingly conclusive QED.

Throughout the half-hour span, Berliner Philharmoniker gave notice of its identification with a work of which it made a fine recording with the composer some quarter-century ago and of which this current generation continues to have its measure. It made for an undoubted highlight of this Proms season, while auguring well for the extensive coverage of Lutosławski’s music that Rattle has planned over the coming year. For now, he responded to the undeniably positive reception with a once familiar encore – Dvořák’s Slavonic Dance in C (Opus 72/7), last heard at these concerts from James Levine and the Boston Symphony in 2007, and given here with a verve and a panache that were well-nigh irresistible.