Despite a series of “Further Performances at the Proms” notifications throughout this year’s printed programmes promising, in Prom 65, The Rite of Spring by one Richard Strauss, I’m glad to report that Semyon Bychkov stuck resolutely to Stravinsky’s work. My twentieth Proms performance over thirty years (I have missed a further eight in that period), the score rarely fails to amaze, yet Bychkov re-imagined it – listed as 1911-1913, with no mention of the 1947 or other revisions – afresh. Julie Price’s confident opening bassoon solo set the tone for a viscerally secure and resplendent performance; visually enhanced by all the woodwind-players on risers above the massed strings (only four of the ten basses were raised). Higher still was the brass, to Bychkov’s right, with the horns to his left and, beyond them, the neatly corralled percussion. 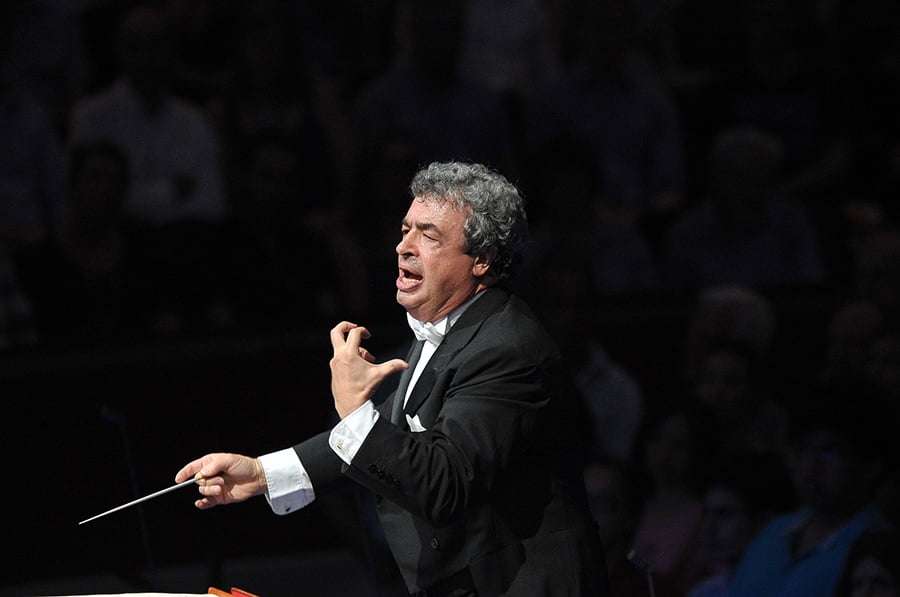 Stravinsky’s structure seemed clearer by this visual representation, especially in the first two sections of the second part – ‘Introduction’ and ‘Mystic Circles of the Young Girls’ – brimming with individual timbres. In the programme there was a wonderful colour reproduction of one of the set-designs by Nicholas Roerich of The Chosen One, raised above a tussock in a verdant landscape or rising hills over a lake in the background: Bychkov and his players gave as much colour in aural terms in a glorious performance.

The colour reproduction for the opening work was also apt by Félix Édouad Vallotton, ghostly dancers without feet – for Ravel’s evocation of Vienna and an “impression of a fantastic, fatal whirling motion.” From the grumbling basses and cellos to start the music qualifies nostalgia with a sense of unease – the 1919-20 dates indicative of the notion of something that died with the horror of the First World War. Bychkov judged these two elements finely in a sonorously tragic account.

The combining of Ravel and Stravinsky were for a specific purpose, as Bychkov had unfinished Proms business. In 2014 he was due to conduct the EUYO in a performance of Luciano Berio’s Sinfonia (as in the Italian), which quotes from both La valse and The Rite (amongst many other works) within its Mahlerian central movement. He was unwell and his place taken by Vasily Petrenko. Vocal octet London Voices were back, taking their places around Bychkov in a semicircle, each with microphone. Sound Intermedia’s Ian Dearden fashioned a very natural balance, although at first I thought the speech a little under-represented in the opening movement where Lévi-Strauss’s anthropological text about Amazonian origin-of-water myths was indistinct. The individual sounds derived from ‘Martin Luther King’ (who was assassinated while Berio was composing the piece) – with the addition of ‘O’ to complete the set of five vowels – were clearer in the second movement, while the snatches of Samuel Beckett that pervade the Mahler-based movement could be clearly heard.

Typical of the Proms there were also less-visible threads to make sense of the programme. Berio’s original composition was in 1968, commissioners New York Philharmonic conducted by the composer; a year later Berio added what is now the Finale, the whole then led by dedicatee Leonard Bernstein when Sinfonia returned to New York in 1970. So a half-century for Sinfonia, and a century for Bernstein as roundly celebrated this Proms season. And – serendipitously – sixty years since Bernstein’s famous New York Philharmonic white-heat recording of The Rite of Spring.