“Songs to include: Picking up the Pieces, Can’t Rely on You, Only Love Can Hurt Like This, Upside Down. Stay on after the Berliner Philharmoniker’s evening concert for a special Late Night Prom by Brit Award-nominated artist Paloma Faith, fêted for her sleek vocals and retro style. This Prom sees the British singer-songwriter joined by a 42-piece jazz orchestra and the elite Urban Voices Collective for a performance that includes new arrangements of songs from her first two, double-platinum-selling albums, as well as from her most recent release, A Perfect Contradiction. A one-off performance striking an intimate mood in the Royal Albert Hall.” [BBC Proms website] 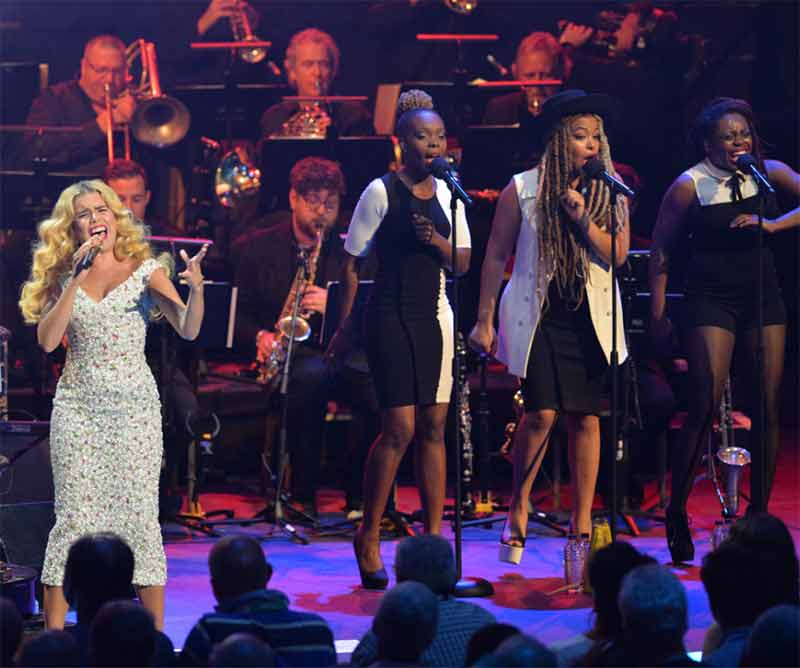 Continuing the seemingly inexhaustible drive to change the focus of “the world’s greatest classical music festival”, this late-night Prom introduced three-times BRIT Award-nominee Paloma Faith. It was an eclectic mix of the Berlin Philharmonic earlier in the evening followed by Faith little more than an hour later, the former maybe an attraction to a younger audience to classical music with a pop concert at the end. I am not sure that it worked, for the audiences for the two Proms were completely different.

Paloma Faith needs little introduction; with ‘Can’t Rely on You’ reaching No.10 in the UK charts in the first week of its release (February this year) followed by the Diane Warren-penned ‘Only love can hurt like this’ (No.6 in the UK and No.1 in Australia). Faith’s third album, A Perfect Contradiction, is surely destined to mimic the double-platinum success of her first two albums. Unsurprisingly it was the basis of much of the music at this Prom with arrangements by Guy Barker with his 15-piece Jazz Orchestra augmented by 27 other musicians.

Joining Faith and Barker were the Urban Voices Collective – perhaps most memorable for their gospel arrangement of the British National Anthem at the closing ceremony of the 2012 London Olympic Games – made up of 30 singers from a variety of backgrounds, a talented and enthusiastic bunch, but in the Hall they were hardly audible (though I gather the balance was better on BBC4 and Radio 3).

Paloma Faith funded her MA in theatre studies by working in Soho bars singing jazz and burlesque songs. She cites Billie Holiday and Etta James as influential and usually performs music she has written (or co-written) or from the past that she feels need preserving. Sandwiched between tracks from the new album and her hits were nestled a couple of early gems, starting with Keely Smith’s 1950s’ hit ‘All Night Long’. Next Faith introduced Ty Taylor (“the greatest living performer of our generation”) to join her in an Etta James cover of ‘I’d rather go blind’. Taylor is indeed a phenomenal performer, clearly influenced by Otis Redding, yet we were limited to just this one appearance.

Effortlessly switching between eras, Faith then returned to her latest album to end the show with her two biggest hits to interspersed with better-known tracks from the earlier two albums, ‘Picking up the Pieces’ and ‘Upside Down’. As would be expected from a pop concert, there were loads of microphones and heavy amplification, compressing the timbre of the strings, although the overall balance was commendable apart from the issue with the UV Collective.

Paloma Faith was clearly having a ball. It was her first time performing in the Royal Albert Hall and she admitted to being nervous, but by the end she had relaxed and was even seen in her high-heels on top of the grand piano in front of a totally unfazed Guy Barker, and the audience danced, waved and sang along to its musical idol who closed with “My name is Paloma Faith and I am proud to be a perfect contradiction.”