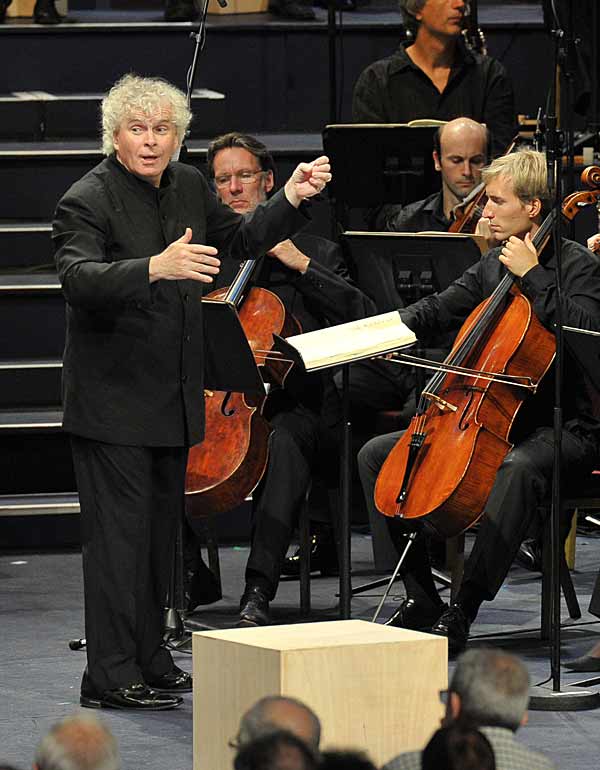 Peter Sellars’s staging of J. S. Bach’s St Matthew Passion in conjunction with the Berliner Philharmoniker and Simon Rattle was first seen in 2010, and in the context of Proms 2014 it complements the St John Passion given earlier in the season, though the latter was not enacted. Sellars’s production was warmly received in Berlin and matched at the Royal Albert Hall, on the whole rightly so. Moreover the vocal soloists are all veterans of Sellars’s direction, although Thomas Quasthoff originally created the bass part.

The production brings to life intensely the work’s themes of human suffering, violence, compassion, despair, love and betrayal through movement and action. Intriguingly, the Evangelist is not an impassive observer or narrator of events, but takes the central role in acting Christ, that the Evangelist is effectively Christ telling his own story. Dramatically this is very striking in separating out the human and divine natures of the Christ figure between Mark Padmore and Christian Gerhaher.

Undoubtedly Gerhaher’s dignified, controlled manner tallied with this exposition, in tandem with his position in splendid isolation at the back of the orchestra. Contrariwise, the suave vulnerability and impassioned feeling of Padmore’s fluid high tenor did full justice to this apparent transformation of the Evangelist role into Christ’s human dimension.

Theologically, however, this sundering of Christ’s two natures damages – some would say heretically so – the work’s message as intended by Bach and his librettist Picander, as it defeats the central Christian mystery of the Incarnation. Whether intentionally or not, Sellars’s vision becomes simply a humanist expression of mortal suffering, rather than an explication of the more profound tenet of the Christian faith that God himself shares in, and transforms the flawed condition of humanity. That suffering can be regarded as possessing a redemptive purpose provided the divine and the human in Christ are held more closely together, the theologically curious need only refer to the Church’s ancient Chalcedonian Definition. Sellars’s majestic view of the specified person of Christ here would also have been more appropriate to the Passion narrative of John’s Gospel than the more vulnerable figure of the Synoptic Gospels. 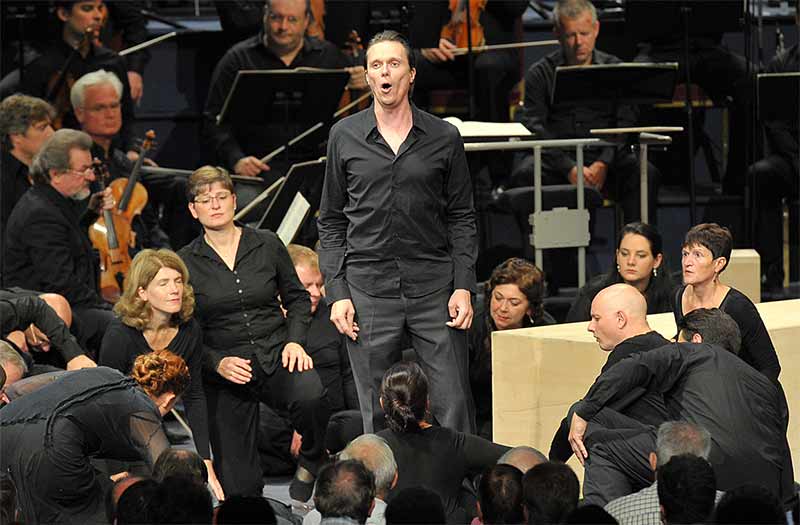 Granted, it remains a conundrum how to represent the Incarnation adequately. Sellars probably meant to downplay the more overtly doctrinal aspects of the work, and in fairness this was followed through consistently, with the musical performance cogently aligned with the dramatic intention. For example, the opening and closing choruses of the Part One – which strongly imply the divine incarnation – were taken quite swiftly and without obvious religious awe or portent. Similarly too, Gerhaher’s singing at the institution of the Eucharist passed over it nonchalantly as a matter of comparatively little consequence.

Otherwise the act of homage or deference was paid to Bach’s music itself, particularly realised by the instrumental soloists’ stepping out into prominence in virtually all of the arias where they are called for. Physical obeisance seemed also to be paid to, or interrogation made of, the music in the way that Magdalena Kožená and Topi Lehtipuu, on separate occasions, knelt before the soloists in arias apportioned to them.

The musicians of the Berliner Philharmoniker were distributed in two chamber-sized orchestras, around which the chorus and vocalists interacted. Simon Rattle moved between the ensembles as necessary, often drawing elegant lucidity and transparency from them. One would not necessarily have recognised the Berliners’ customary depth of tone, but certainly they were identifiable from the finesse and detail invested in the music. Historically-informed practice was not adopted as such, but there was the lightness and vigour often associated with it, as well as the provision of a theorbo for much of the continuo part, and a viola da gamba for the relevant solos.

Among the vocal soloists, the accolades clearly belonged to Padmore and Gerhaher in that order, in proportion to their contributions. Kožená and Camilla Tilling both brought sweetness and innocence to their singing, ‘Erbarme dich’ perhaps all the more powerful for its unaffected simplicity. Kožená, though also acted with almost erotic abandon at times in relation to Padmore’s Evangelist/Christ – not inappropriately in ‘Buss and Reu’, reflecting upon the anointing of Christ’s feet by the figure traditionally associated with Mary Magdalene, the reformed prostitute. Topi Lehtipuu and Eric Owens were less successful: there was sometimes a nasal wobble or whine to the former’s singing in faster music, and a sort of garbled vibrato on Owens’s part which tended to result in musically indistinct and unshaped lines. The combined choristers of Wells and Winchester Cathedral formed the ripieno in the opening chorus. Their massed numbers and elevated position ensured an arresting projection of the chorale – almost like a mystical vision of heaven opening up.

Those expecting a return to the bigger-boned style of performance might have been disappointed, and if one were experiencing this solely as a musical performance it would be unlikely to count as definitive. But drama and music were compelling as they unfolded together, and notwithstanding quibbles, at a human level they were provocative and stimulating.