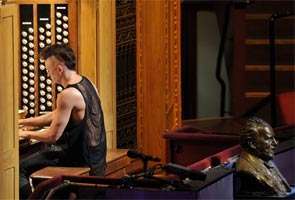 Often organists do not make much of a splash in the music world, hidden, as they often are, high up in a (dusty) organ loft. The great American virtuoso Virgil Fox brought flamboyance to the organ world, and Britain’s Sir George Thalben-Ball, a mentor to many of the latter-half-of-the-twentieth century organists, did a lot to bring the “King of Instruments” to greater prominence outside of churches. The recently late Carlo Curley, himself a great showman (the self-styled “Pavarotti of the Organ”) did his utmost to bring the organ into the heart of the concert platform, or, if not possible, would insist on a projection so that the audience could see him play. The organ has such vast possibilities in that it can explore many ‘orchestral’ sounds, colours and textures. The scores of Bach contain little in the way of guidance other than the notes, so to play his music as written would be a boring affair indeed. It is the organist’s job to bring this music alive, and that it exactly what Cameron Carpenter did here.

Despite Carpenter’s outward showmanship – there have been numerous interviews telling much about his eclectic lifestyle – what comes across is his respect for the music. Leopold Stokowski, Henry Wood, Ottorino Respighi and Ferruccio Busoni all took J. S. Bach’s music and fashioned individual takes, bringing colour and emotion, and that is what Carpenter does in his (re-)arrangements: certainly not ‘authentic’.

To begin, Bach’s mighty Toccata and Fugue in F, which, back in 1871, Anton Bruckner improvised on during his “miraculous recital” on this very RAH organ. Well, in Carpenter’s words, he offered “plain Bach”, and explored the organ’s possibilities with due regard. He at-once showed-off his nimble pedal work – transposing these notes to F-sharp and allowed the genius of the composer to shine through. 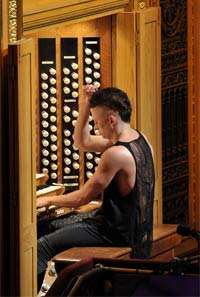 The dud of the afternoon was Carpenter’s arrangement of movements from Bach’s E major violin Partita, which occasionally descended into ‘music hall’ territory, and was indulgent elsewhere. There followed an often-light and meditative account of Prelude and Fugue in A, with Carpenter weaving a textured and multifaceted quilt of sounds into a satisfying whole. The Chorale Prelude ‘Nun freut euch, lieben Christen’ (Now rejoice, dear Christians all) was delivered with virtuosic aplomb, without boiling over, Carpenter allowed the Chorale theme to soar movingly through the urgent and incessant semiquaver accompaniment.

The B-A-C-H motif (German for B flat, A, C and B natural) has among others inspired Liszt and Max Reger. Carpenter’s treatment, which began with a simple statement of the theme, went on to not only explore many and varied melodic possibilities (citing Liszt’s fugue subject) but he also put the organ through its paces: this was rock ‘n’ roll and, at the close, a towering edifice of sound.

The most familiar of organ music as you have never heard it before – although Mendelssohn noted that he “let loose” with it in 1830 – was the last-billed item: Bach’s Toccata and Fugue in D minor (probably not by him nor for the organ), as arranged by Carpenter after Henry Wood’s orchestration and Busoni’s piano version. In 1900 Busoni turned the work into a showstopper for virtuoso pianists; and Henry Wood, with the pseudonym of Paul Klenovsky, gave the work much orchestral colour and razzmatazz. Carpenter has taken these two versions and put them back on the organ. It was a superbly realised account. To hear the great Royal Albert Hall instrument played with such dedication, and with full exploration of registers and colours, made for a wholly satisfying experience.

Carpenter offered as an encore a medley of British tunes, not least Noel Coward’s London Pride, laced with Chariots of Fire, Rule, Britannia!, Jerusalem, and God Save the Queen. Fab! To be continued…