“John Wilson and his orchestra are an annual Proms highlight, bringing the glitz and glamour of old-time stage and screen to the Royal Albert Hall. The second of their two performances this year is all about Leonard Bernstein – America’s multitalented conductor, pianist and composer. He reinvented the musical with the anger, energy and feral beauty of West Side Story, his updated take on Romeo and Juliet. A starry cast of soloists including Proms favourite Julian Ovenden and the West End’s Louise Dearman join the John Wilson Orchestra and Maida Vale Singers for a tribute to the composer that includes Bernstein’s biggest hits as well as a selection of rarities.” [BBC Proms website] 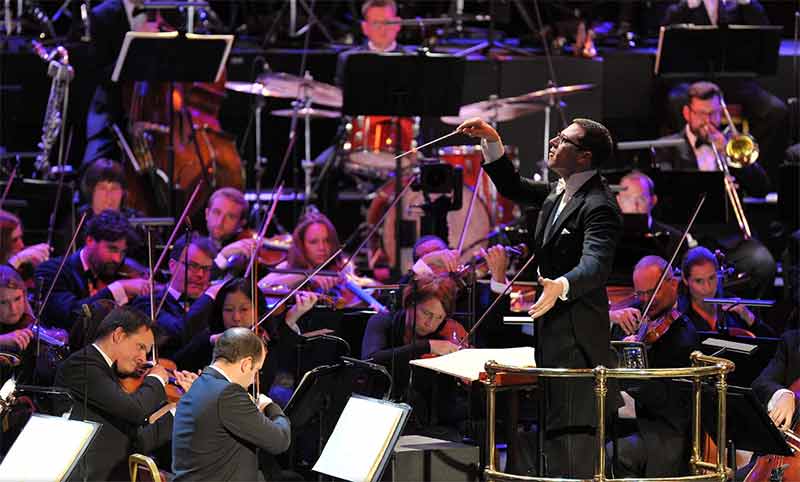 Judging from the whooping, cheering and ability to applaud absolutely anything, the vast majority of the capacity audience for this Leonard Bernstein Prom confirmed that John Wilson has an almost rock-star status, something that I normally concur with; however after two hours of listening to some of the most wonderful music written in the twentieth-century I was left feeling flat and disappointed.

The second concert for the John Wilson Orchestra this season (the first being the late-night Sinatra Prom) celebrated the music of one of the most versatile musicians the last hundred years has produced. Leonard Bernstein (1918-90), often described as a Renaissance man, had his reputation made at a stroke in 1943 when he replaced Bruno Walter for a broadcast concert with the New York Philharmonic (which he would later become music director of). Instantly famous, Bernstein’s career blossomed as a formidable pianist, educator and writer; a born communicator. Like his idol Gustav Mahler, Bernstein added composition into the mix, though his music didn’t always meet with success at the first outing, and some of his greatest triumphs were revised many times. 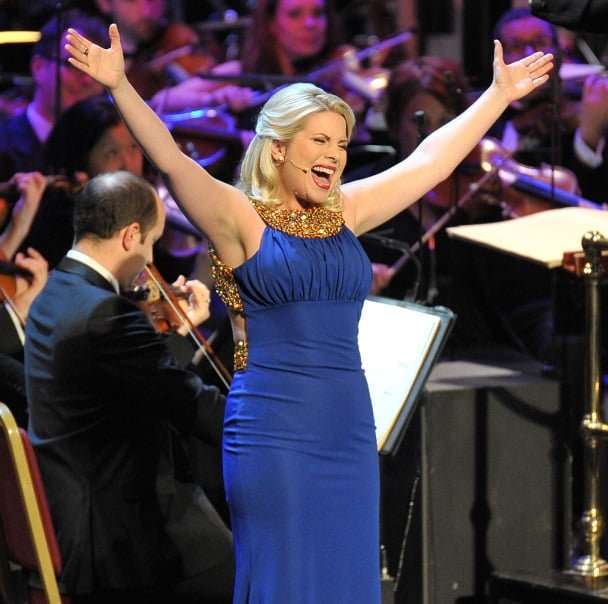 The first piece of the Prom was given over to soloists from the Maida Vale Singers in the opening scene from Bernstein’s re-working of the ballet, Fancy Free. On the Town opens in the early-morning (‘I Feel Like I’m Not Out of Bed Yet’) as the dockside workmen mourn the start of a new working day. Robert Winslade-Anderson’s silky-rich bass reminded of Willard White, and set the bar very high for the music-making ahead. Jack North and Mark Meadows made up the unhappy trio. Act One continued into the sparkling and jazzy ‘New York, New York’, which introduced Julian Ovenden, Stuart Matthew Price and Matthew Seadon-Young as Gabey, Chip and Ozzie – three sailors excited by twenty-four hours shore-leave. With amplification (not unexpected!) the three bounded on with such exuberance that they almost forgot they were there to sing. Ovenden’s pleasingly delicate ‘Lonely Town’ was followed by the Copland-inspired ‘Pas de deux’. Louise Dearman’s sassy and seductive ‘I can cook, too’ finished the set, envisaged as being continuous, save the audience insisted upon clapping during it.

1600 Pennsylvania Avenue was written to celebrate the bicentenary of US independence in 1976. With Alan Jay Lerner writing the words and great expectations of a Broadway run, the show received terrible reviews and closed after only seven performances. Bernstein’s music saved it from complete obscurity and two of its most well-known songs received commendable renditions. ‘The President Jefferson Sunday Luncheon Party March’ depicts the third US President through his love of exotic foods and is a masterpiece. The MVS, always on-point with diction, made as much as it could of, for Lerner, quite ordinary lyrics. Edith Piaf said that she could “sing a phone book and make it sound good” – the members of the MVS showed similar fortitude. 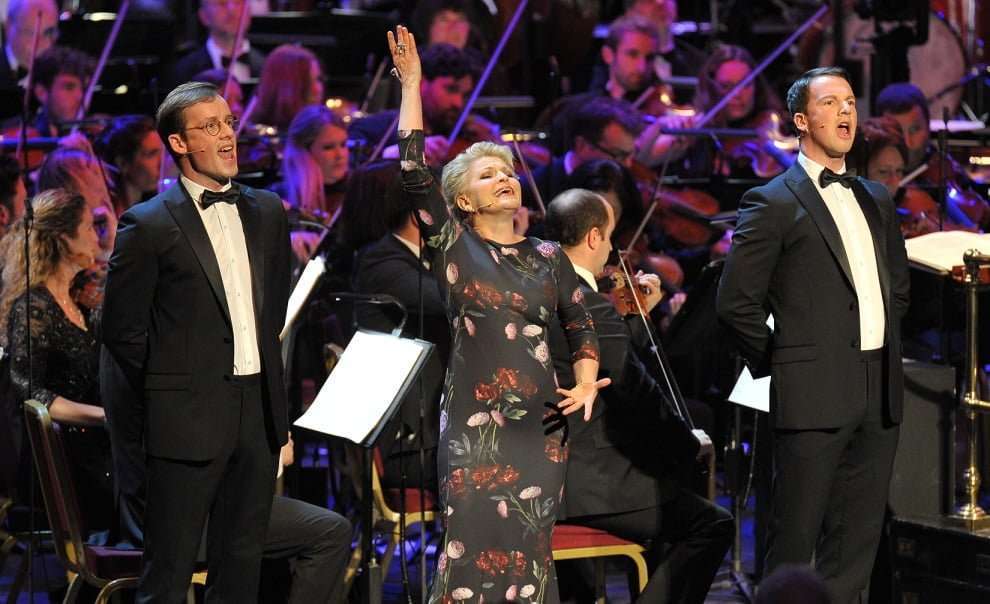 In one of my favourite Bernstein musicals, Wonderful Town, Scarlett Strallen appeared as the ‘A Little bit in Love’ Eileen Sherwood and Louise Dearman, as her sister, the sassy and brusque Ruth in ‘A Hundred Easy Ways to Lose a Man’. Dearman, no stranger to JWO concerts – she was in last year’s Kiss me, Kate – played well to the audience with a visual spectacle that decorated the song.

Bernstein’s only film music was for Elia Kazan’s 1954 On the Waterfront with Marlon Brando. Bernstein turned the score into a Symphonic Suite. Apart from an unfortunate cracked note in the opening horn solo, this was a movingly convincing reading. The two sets of timpani and a plethora of percussion are heard mainly in the fight-music scherzo.

After the interval, both the orchestra and the singers struggled to come to grips with Candide. First performed in 1956 and with many revisions, Candide is more opera than musical-theatre and places high demands upon the performers. The Overture, which slides effortlessly between time-signatures, traps the unwary and Wilson and his players gave a sloppy and characterless rendition (including a too-soon final chord). In ‘I am Easily Assimilated’ Lucy Schaufer as the Old Lady was delightfully animated, while the Seadon-Young duo, Matthew and David, stood lifeless to sing the accompanying part. ‘Nothing More than This’ needed much more than that – Julian Ovenden quite the lackadaisical Candide. Scarlett Strallen, reprising the role of Cunegonde that she played at the Menier Chocolate Factory, was the best of the group, though Bernstein’s fiendishly tricky coloratura did defeat her at times. 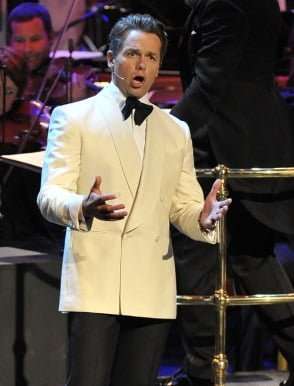 Back on more familiar territory, West Side Story, amplification aided the cries of “Mambo” during ‘Dance at the Gym’, which were almost inaudible until the kindly sound-engineer twiddled his knobs, and yet more knob-twiddling pushed the trombones in and out of obscurity. There followed ‘Maria’ – another outing for Ovenden, as Tony, which though well-intoned felt rushed. ‘Gee, Officer Krupke’ ended the selection, a fun rendition that found the JWO tired. A chorus part was added unnecessarily to Bernstein’s score.

Probably the best performance was from Lucy Schaufer, playing Dinah, in ‘Island Magic’ from Trouble in Tahiti. With words and music by Bernstein, this short opera is the story of a lonely and unhappy couple who long for love but are unable to communicate. Schaufer required no amplification to fill the Hall and the result was spellbinding. Unfortunately the ample orchestration was too much, leaving Wilson with a balance problem that he seemed oblivious to.

‘Dream with me’ was written for a production of Peter Pan, for which Bernstein wrote a handful of songs. It is a delightful setting, given expert attention by Strallen, and it is a shame that it was cut from the earlier show, only receiving its first appearance in 1975. Aside from a dull and uninspiring rendition of ‘America’ (West Side Story) as an encore, introducing Alexandra Silber and Gina Beck, the final programmed piece was from Candide, ‘Make Our Garden Grow’, which is almost impossible to perform badly, and was given by the whole company. The a cappella section usually brings the hair up on the back of one’s neck, failed to do so – I am not sure why, perhaps I felt a little cheated as one might on discovering the secrets of a magic trick – but Bernstein’s show hits seem to be even more popular these days.