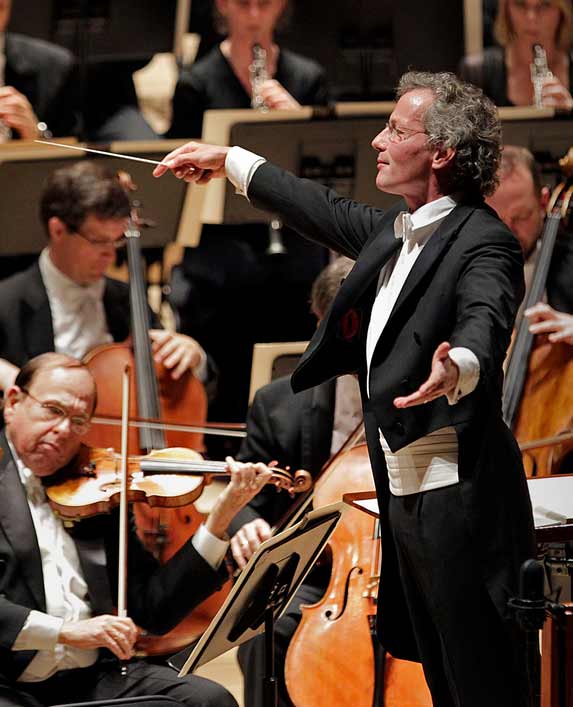 Maybe two Cleveland Orchestra programmes of Brahms and Jörg Widmann conducted by music director Franz Welser-Möst was one too much, for the Royal Albert Hall was half-full/half-empty, although the Arena was reasonably well-attended (sadly with several selfish people leaving their mobiles on, their plastic playthings, to distract others, and with texting occurring while the music was being played!; at least they had left before the second half) but with many seats unoccupied.

As for programming, well, America has some terrific symphonists – Peter Mennin, Walter Piston, Christopher Rouse and William Schuman, to name but four – so a shame not to have something home-grown from the Clevelanders, although this is a hindsight remark in the light of the disappointing Teufel Amor.

Brahms’s Tragic Overture opened the Prom in ‘take it or leave it’ fashion, hardly arresting. Lucid and refined is to be welcomed, although the too-loud edgy-sounding trumpets rather upset things at times, and the violas (still led by Robert Vernon, since 1976) were curiously undernourished in terms of tone, yet for all the sterling musical values on display there was little combustion to take us to the soul of this great piece. Such efficiency also informed the first movement of Brahms 2, flowing initially and then getting faster, very business-like if with some beguiling woodwind detail, although that came across as no more than luxury decoration. Classically concise is one thing, straight-jacketing the music is another. For all that the repeat of the exposition is important (IMHO) its absence here was a blessing, although it still seemed parsimonious.

By contrast – and now something transformative happened – the slow movement was given with grace, sheen and pathos, and the third was elegance and neatness personified … then straight into the finale (clappers now given no chance to butt in), performed with joy and fire, the musicians and the conductor now well into their stride. There were though a few slippages in the playing in both Brahms pieces, more than one might expect from an orchestra of this vintage and status, but one of those things on the night. As an extra, the ubiquitously-encored Hungarian Dance No.1 (one of only three that Brahms himself orchestrated), was sleekly given.

Meanwhile, earlier on, Teufel Amor by Jörg Widmann (born 1973) had rather trudged its way through to nearly 30 minutes. This “symphonic hymn after Schiller” (2009/11) has attracted some top-name conductors – Pappano (the premiere), Barenboim, Harding – yet for all the skill of the composer and the appeal that a large orchestra offers, there was little to distinguish this canvas from numerous others that rely on static low notes from trombones, tuba and contrabassoon, or the hallucinatory effect of a gaggle of tuned gongs, or the nothingness of bowed cymbals… and so ‘Devil Cupid’ went on, with plenty of sound but little that could be called substantive or distinctive as the piece formed (meanderingly) and was then deconstructed. The best music came between these states, with heightened emotions suggesting post-Mahlerian angst, and clearly relating to Alban Berg and, to a lesser extent, Richard Strauss. The problem is that as a one-off Teufel Amor worked well enough, but so many of these timbres and gestures have become commonplace in ‘new’ music and Widmann seemed content to here join the crowd and seek little that could be considered original and personal.