“What does gospel music mean today? The Proms explores this emotive and richly varied world – the meeting and mixing of musical styles of four continents. Leading vocal ensembles combine with community choirs and soloists to create a thrilling massed wall of sound for favourites such as ‘How Great Thou Art’, ‘Swing Low, Sweet Chariot’ and ‘O Happy Day’, interspersed with individual contributions. The British-Caribbean People’s Christian Fellowship Choir juxtaposes popular hymns with calypso choruses, while the London Adventist Chorale reminds us how African Americans turned to spirituals in their fight for freedom. Muyiwa & Riversongz bring West African highlife praise to another level, while the London Community Gospel Choir merges Caribbean and African traditions with new songs inspired by funk and rock.” [BBC Proms website] 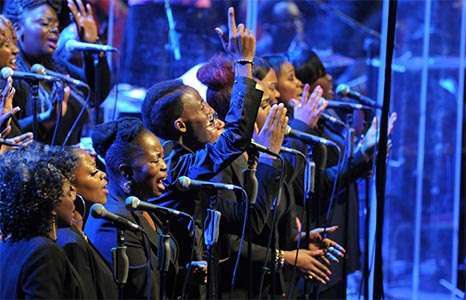 There could be no doubting the fervour; nor the general reception to this, the first-ever Gospel Prom. There were some 200 singers, mostly dressed in black but with some shock of colour. Four Gospel Choirs were to the front, with the massed university choruses with Morley College and the B.I.G. Choir, organised by British Gospel Arts, arrayed behind. The programme had sensibly been divided into six sections, tracing the history of Gospel singing – Spirituals, British Caribbean Hymns, Traditional American Gospel Songs, British Contemporary Gospel Songs, African Praise Songs and Inspirational Gospel Songs – many of which featured solo choirs (if that’s not a contradiction in terms), before a massed medley.

So far, so praiseworthy, but then the problems started. Centre stage was a rhythm and guitar combo (the Gospel Prom Band), which – of course – was amplified. All the choirs were heavily miked, and the resultant barrage of sound denuded the evening of any harmonic subtlety. Quite simply, this was like listening to a badly balanced recording – although that seemed not to bother the tightly packed front of the Arena, and equally well-attended Stalls and Boxes. 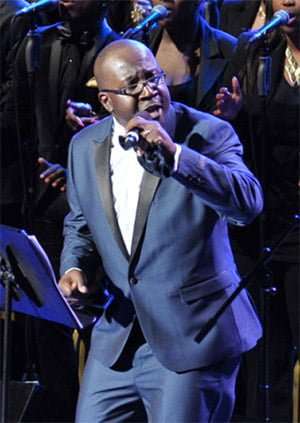 Perhaps appropriately, I am an alumnus of University College London (“the Godless of Gower Street”), so there was no way that this Prom was “preaching to the converted” as far as I am concerned. But I went with an open mind, especially as I had very much enjoyed the a cappella Spirituals in the current National Theatre production of James Baldwin’s The Amen Corner, featuring none-other than the London Community Gospel Choir, whose members contributed to this Prom’s ‘Traditional American Gospel Songs’ and ‘British Contemporary Gospel Songs’ sections. But I’m afraid I was not a convert.

I wanted to hear the arrangements from such renowned ensembles as Ken Burton’s London Adventist Chorale (no stranger to the Proms), as well as for the first time African-influenced Muyiwa Olarewaju and Riversongz, who certainly whipped the willing audience to its feet, but at all points the amplification foiled any such thought of uncovering the vocal beauty of what I understood Gospel singing is all about. I fled the Royal Albert Hall with the thought that if God had wanted amplification he would have given Moses a microphone along with the Ten Commandments. This was the evangelical equivalent of “Hooked on Classics”.

So, I inadvertently arrived with expectations that were not met, and that if contemporary Gospel singing is so heavily augmented, then so be it. But we’ve already heard the power of the collected human voice, without the need for amplification – and over a full orchestra: Vaughan Williams’s A Sea Symphony on the First Night. Why obscure the very nature of the instrument that is to be celebrated?Thankfully, we’d already had a miracle earlier on this evening – the extraordinary and uplifting Rachmaninov Second Piano Concerto from blind Japanese pianist Nobuyuki Tsujii. That was truly ‘inextinguishable’ from the memory, as was the appropriately titled Nielsen Symphony in the same programme. And, given the return to Proms form the following night, with Thomas Adès’s Totentanz, it may be that the devil (in the shape of death) really does have the best tunes after all.