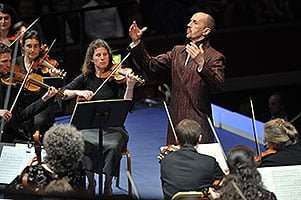 Such was the level of royal approval for Handel’s three Suites of Water Music composed for a concert on the River Thames, that George I requested them played three times over. Ten monarchs later and inside the Royal Albert Hall – how perfect it would have been to have seen the fountain reinstated – the three suites formed the greater part of this season’s first Late Night Prom, followed by the equally outdoors-orientated Music for the Royal Fireworks. 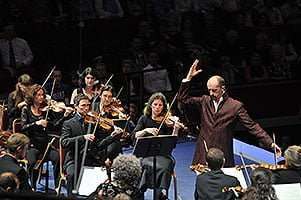 Late Night Proms have been a wonderful innovation, an opportunity to turn down the lights on music more suited to a chamber scale. The musical fare presented here was anything but! Hervé Niquet and his Le Concert Spirituel assumed battle formation, making full use of the platform’s spaces with the sorts of forces which Handel may have employed on that Thames barge in 1717. Eight bassoonists formed the rearguard, joined by two contrabassonists. In front of them, two rows of oboes (eighteen players as opposed to the twenty-four Niquet gathered in Metz for his Glossa recording), flanked by nine horns on one side and nine trumpets (for the D major Suite) on the other. Antiphonal timpani and a full string band, led by Alice Piérot, completed a formidable line-up.

Those allergic to period instruments would have been advised to steer well clear of the RAH, but I was utterly bowled over by the piquant original tuning adopted by Niquet’s oboes, the buzzing rasp of the bassoons, the joyous whooping horns and the huge spirit of fun with which the music was performed. Tempos were alert, never too fast to hamper articulation but just fast enough to add a sense of danger where the brass was concerned. In truth, the trumpets were less than secure, but I’m not going to complain about dodgy intonation when the music was approached with such joy. The more intimate G major Suite brought about much delicate playing, especially when half the oboists (and two bassoonists) switched to recorders, trebles for the ‘Sarabande’ and descants for the Minuets. 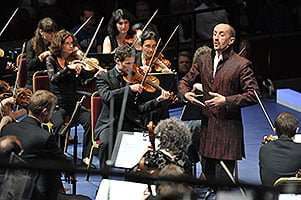 Music for the Royal Fireworks was composed to help celebrate the peace treaty of Aix-la-Chapelle with a massive outdoor concert in Green Park. George II spared no expense, commissioning Handel to compose music to accompany a grand fireworks display which turned into something of a damp squib. Its five movements were performed with great élan, not least the French-style ‘Overture’ with its dotted rhythms, surging horn swells and tremendous antiphonal timpani tattoos, although some brass-playing was of less than military precision. The ‘Bourée’ had great rhythmic spring while ‘La réjouissance’ and the closing Minuets had grandeur aplenty.

Dressed in a natty brocade frock-coat, Niquet’s conducting style is magnetic and supremely Gallic in flair. He conducts with his whole body, a very balletic approach which saw him airborne at one point in the Fireworks Music. Crouching, leaping, swaying; the full choreography was there. At times, he didn’t conduct at all; at others, there was witty banter with the audience in the Arena. Worth watching when this Prom is broadcast on BBC2 on 4 August.