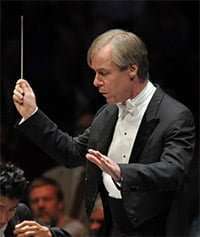 David Robertson, a regular at the BBC Proms over the past fifteen years, here brought the St Louis Symphony for its first-ever appearance at the festival. He has been music director these past seven seasons.

Brahms’s two concert overtures (Academic Festival and Tragic) contrast one that is a joyous expression of thanks with one that is tormented and turbulent. With the Tragic Overture’s fatalistic opening chords the St Louis Symphony set out its stall – rich in colour with carefully crafted phrasing, the winds and brass producing a good ‘choir’ tone as part of a strong performance of a work that is not programmatic but dramatic nonetheless. 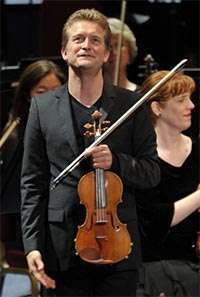 Beethoven’s Violin Concerto followed, written in late-1806 for Franz Clement who gave the first performance on 23 December that year. Possibly the initial lack of success persuaded Beethoven to transcribe the solo part to make a piano concerto, and for which he supplied a first-movement cadenza. Christian Tetzlaff, like Max Rostal, Eugène Ysaÿe and Wolfgang Schneiderhan before him, has made an arrangement of this cadenza, likewise incorporating Beethoven’s timpani: a worthy alternative to the Joachim or Kreisler cadenzas more frequently heard.

This was a performance made for speed, shorter even than Tetzlaff’s 2006 recording with David Zinman. David Robertson and the SLS were attentive throughout, providing a well-crafted accompaniment. Tetzlaff’s solos were a more mixed affair. Bland and colourless at his first entry (more like scales and arpeggios being practiced) the performance had settled down by the time of that cadenza. The subdued flautando Larghetto with extra-light accompaniment was pure magic although added cadenza into the finale was superfluous and its notes approximate. A sprightly rondo (including another redundant interpolation) was enhanced by chamber-music interaction leading to a rousing conclusion.

Continuing the ‘need for speed’ Tetzlaff played the finale (Allegro assai) from J. S. Bach’s unaccompanied Sonata in C (BWV1005), which felt rushed, showing off the violinist’s technique for its own sake and in contrast to his previously more considered performances.

Arnold Schoenberg’s Five Orchestral Pieces dates from 1909, the premiere being given at the Proms under Henry Wood in 1912. The composer revised the score in 1922 and reduced the size of the orchestra in 1949. For this centenary performance, Robertson returned to the original score. Upon the advice of his publisher Schoenberg reluctantly gave each movement a title (‘Premonitions’; ‘The Past’; ‘Colours’; ‘Peripeteia’; ‘The Obbligato Recitative’). The music reflects personal and artistic turmoils. This was an inspired performance by the St Louis Symphony; snarling brass in the first piece gave way to post-romantic gestures in the second that were Mahlerian in origin. Sadly audience coughs, splutters and rustles wrecked the hushed tones of the third piece, ‘Colours’. The conflicts of the fourth were dispatched with venom leading to the final movement and an inconclusive ending with a solo cello, here played by Daniel Lee. Overall this kaleidoscope was expertly laid bare under Robertson who carefully wove Schoenberg’s counterpoint and brought out often unheard lines.

To close was a relaxed and affectionate performance of George Gershwin’s An American in Paris (1928). With car horns that honked and brass that swung this was a joyous performance. This, we were advised, was the first time that an American orchestra and conductor has brought this work to the Proms [not so, if encores count, because Lorin Maazel and the Pittsburgh Symphony Orchestra played it thus on 24 August 1985 – Ed.]. With blues-style slides in the brass and woodwinds, smoochy saxophiones, and portamento string-playing, the St Louis Symphony oozed with confidence and felt right at home.

As an encore was a suitably vivacious performance of Leonard Bernstein’s Overture to his opera Candide, full of life and energy to send the St Louis Symphony off to several European dates on its current tour.