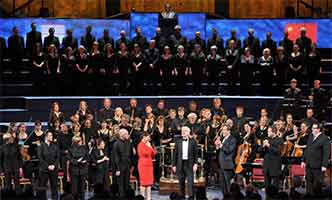 They remain as the opening bars of Nixon in China (first staged in 1987) get underway, a simple refrain that becomes overdone for all that a saxophone adds a Philip Glass Façade-like overlay. Yet this is powerful scene-setting for 21 February 1972, an airfield outside Peking. The orchestra (not huge, pit-size, but rich in winds and brass, plus two pianos, and with a synthesizer that is an orchestra in itself) is joined by the BBC Singers – superb, as they will be throughout the evening – as representatives of the Services, dutiful, accepting of their ‘condition’. In its own way, it’s rather beautiful. The composer is conducting; there is now a lift in the music, a precision of texture, and the BBC Symphony Orchestra is on top of the score in a very complete way, as it will be all the way, responding wholeheartedly to the composer’s hard-working and authoritative direction.

But the musical repetitions remain troublesome…

President Richard Milhous Nixon and the First Lady (Pat) arrive; a model plane, representing “The Spirit of ‘76”, is passed through the ranks of the Singers. Cute! Nixon smiles for the cameras. My word, Robert Orth is a true ringer (and singer) for Mr President. He is met by Chou En-Lai, the less lookalike Gerald Finley, but his vocal resources are impressive. Couldn’t decide at this point (or at other places) if the voices were electronically enhanced in some way; something didn’t seem quite right, the vocals a little less than natural both in timbre and dynamics, yet not always. Still, the composer is here, and conducting, so will have his imprimatur. 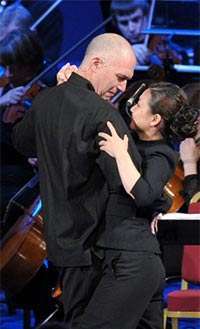 This is about, based on, a real event, a US President visiting China, a springboard for Alice Goodman’s flights of fancy – her scenario and words are later questioned by some members of the Proms audience. I’ll stick with the music, with some beguiling and jazzy hues as we go along, a halo of sound surrounding Nixon’s opening speech (“Simply achieving a great dream”) and attracting a web of choral voices. But the music is achieved by too many circular patterns. Not so much “News, news, news…” as qualms, qualms, qualms.

Exchanges between Mao, Chou, Nixon and Kissinger bring a lively acoustic (still not sure if it’s real or contrived) but Adams’s integration of musical styles is skilful and ‘being there’ in the Royal Albert Hall brings its own enhancement, a connection to the performers, the seeing of a telling gesture. Alan Oke is a marvellous Mao, not lookalike either (of course), but, my word, he can reallt deliver the role with charisma.

Scene 3 begins with an elegant dance (this is banquet time, Chinese style). Pat and Richard are supported by a night-club atmosphere, a perchance to dream, but when Chou has a long speech, we’re back to a particularly irritating pattern entirely synthesized. And misgivings are creeping in about how deeply these world figures are being characterised: are they are not too similar, superficial even (with parlando rather than rich vocal lines) but maybe that’s the point. However, the first Act (67 minutes) is now over and it’s been hanging together rather well. 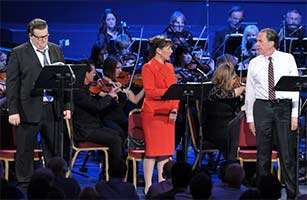 I have Act One’s final bars firmly in mind; although there has been ample opportunity to get to know them. Elliott Carter has made some tart comments about musical brain-washing… Interval time and a cup of coffee. Mid-sip my companion asks if the Proms could perform West Side Story? Great (unclassifiable) stage-work, of course. No idea, I tell her, but I know a man who does. Roger and out!

Act Two of Nixon in China begins with an upbeat orchestral prelude not far away from Short Ride in a Fast Machine. And here’s news: Pat has a scene to herself, the music suggesting that she is the real individual here, the colourful orchestra contributing much, but we (again) reach a certain point where there is a need for a ‘change of record’, the ear and soul craving a different rhythm, and some of Jessica Rivera’s dynamics are queried by this sound-conscious listener … and then there is a soaring of feeling from the unbuttoned Pat, and this becomes one of the evening’s highpoints; a muted trumpet contributes much.

This concert setting, with some moving around, interaction and a behind-orchestra semi-circle of images, seems to work better than a fully-staged production … or at least the one of Nixon in China that I have seen.

Scene 2, some sort of a play of masquerades, enjoys a whipping up of a real and compelling storm from a few orchestral droplets, and Pat gets some rapturous music, the aftermath suggesting Wagner’s Rhine and Strauss’s Alpine Symphony; another highpoint, and nor should the jaunty ‘Bayonet Dance’ be forgotten. This is a quick-change Act (49 minutes), ending in Red-Book delirium. All in all, compelling and outstanding – the Royal Albert Hall is buzzing.

Act Three (the BBC Singers not further needed). Well, it’s something of an anti-climax, a reminiscing for the main crew, Chiang Ch’ing, Mao’s wife, still with us, still commanding, Kathleen Kim fearless in the top registers (but her enunciation is not so good). She swirls and twirls (the Chairwoman dances!) while Pat yearns. There’s a bit of toilet humour for Kissinger as the air fills with 1920s’ dance music (nostalgic for the then-young Pat and Richard, and seemingly for the Chinese too). Pat utters an obscenity, cut from the printed libretto. We have a menu (apricots, chicken, peppers), an orchestra becoming emotionally edgier while the composer remains tireless on the podium; he has written some impressive three-part counterpoint for the Chinese contingent.

Act Three becomes a postscript; some repetitive patterns still trouble (I know I’ve said this before, but so has Mr Adams), while long-held notes in trumpets and trombones mean rather more. We end (Act Three has taken 35 minutes) on a reflective note for Chou, with solos for violin, viola and cello in the mix, beautifully played, and this guy really knows how to write for saxophones and low winds to create a beguiling web of sounds.

John Adams is of course one of the most-popular and most-played of contemporaries composers. He has also been crowned as the king of modern opera. Not sure about that given the achievements of Birtwistle, Glanert and Previn (the latter announced last year that he is working on a third operatic project). Yet, Nixon Act Two is often stunning, and there is no doubting the sheer success and quality of this performance as a whole – a triumph for the composer/conductor, all the singers and players, and the Proms.

Doubts, I now have fewer…