Skip to content
LnRiLWNvbnRhaW5lcltkYXRhLXRvb2xzZXQtYmxvY2tzLWNvbnRhaW5lcj0iYThhNzRmYzkxMDFhMTMyNTcwNDM5Y2IyY2U4NDZhZDEiXSB7IHBhZGRpbmc6IDI1cHg7Ym94LXNoYWRvdzogNXB4IDVweCAxMHB4IDAgcmdiYSggMzEsIDIyNCwgMTg2LCAwLjUgKTtib3JkZXI6IDJweCBkb3R0ZWQgcmdiYSggMzEsIDIyNCwgMTg2LCAxICk7IH0gLnRiLWZpZWxkW2RhdGEtdG9vbHNldC1ibG9ja3MtZmllbGQ9ImRhZmQxZmU1MWExNTZkYWUzMDQxMDg3MjExY2YzNDYzIl0geyBiYWNrZ3JvdW5kLWNvbG9yOiByZ2JhKCAyMzgsIDIzOCwgMjM4LCAxICk7Ym9yZGVyLXJhZGl1czogMDtwYWRkaW5nOiAxMHB4OyB9IA==
LnRiLWNvbnRhaW5lcltkYXRhLXRvb2xzZXQtYmxvY2tzLWNvbnRhaW5lcj0iYThhNzRmYzkxMDFhMTMyNTcwNDM5Y2IyY2U4NDZhZDEiXSB7IHBhZGRpbmc6IDI1cHg7Ym94LXNoYWRvdzogNXB4IDVweCAxMHB4IDAgcmdiYSggMzEsIDIyNCwgMTg2LCAwLjUgKTtib3JkZXI6IDJweCBkb3R0ZWQgcmdiYSggMzEsIDIyNCwgMTg2LCAxICk7IH0gLnRiLWZpZWxkW2RhdGEtdG9vbHNldC1ibG9ja3MtZmllbGQ9ImRhZmQxZmU1MWExNTZkYWUzMDQxMDg3MjExY2YzNDYzIl0geyBiYWNrZ3JvdW5kLWNvbG9yOiByZ2JhKCAyMzgsIDIzOCwgMjM4LCAxICk7Ym9yZGVyLXJhZGl1czogMDtwYWRkaW5nOiAxMHB4OyB9IA==
“Songs to include: Poses, Going to a Town, Cigarettes and Chocolate Milk, Over the Rainbow, Dinner at Eight, Me and Liza. He has already taken over the Royal Opera House and staged his first opera; now charismatic singer-songwriter Rufus Wainwright comes to the Proms. Joined by the instrumentalists of the Britten Sinfonia, the Canadian-American Grammy nominee performs a spectacular set, filling the Royal Albert Hall with his own brand of ‘baroque pop’ that references everything from opera to ragtime, Lieder to jazz.” [BBC Proms website]
LnRiLWNvbnRhaW5lcltkYXRhLXRvb2xzZXQtYmxvY2tzLWNvbnRhaW5lcj0iYThhNzRmYzkxMDFhMTMyNTcwNDM5Y2IyY2U4NDZhZDEiXSB7IHBhZGRpbmc6IDI1cHg7Ym94LXNoYWRvdzogNXB4IDVweCAxMHB4IDAgcmdiYSggMzEsIDIyNCwgMTg2LCAwLjUgKTtib3JkZXI6IDJweCBkb3R0ZWQgcmdiYSggMzEsIDIyNCwgMTg2LCAxICk7IH0gLnRiLWZpZWxkW2RhdGEtdG9vbHNldC1ibG9ja3MtZmllbGQ9ImRhZmQxZmU1MWExNTZkYWUzMDQxMDg3MjExY2YzNDYzIl0geyBiYWNrZ3JvdW5kLWNvbG9yOiByZ2JhKCAyMzgsIDIzOCwgMjM4LCAxICk7Ym9yZGVyLXJhZGl1czogMDtwYWRkaW5nOiAxMHB4OyB9IA== 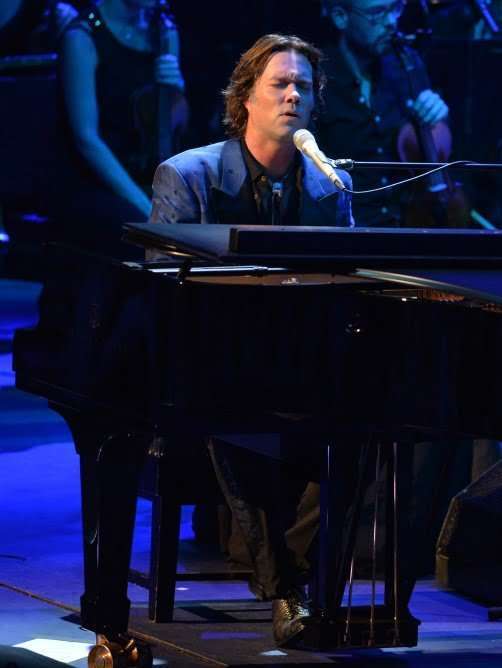 Rufus Wainwright proved a natural choice for the last late-night Prom of the 2014 season. The Canadian-American singer grew up with music as his life, his parents being folk-singers Loudon Wainwright III and Kate McGarrigle, and his sister Martha is also a singer-songwriter. All four have been prolific artists, though McGarrigle tragically died of sarcoma, a rare form of cancer, at the age of 53. She introduced the young Rufus to opera, from which grew a love of Puccini and an appreciation that has informed even his most-popular composing.

Wainwright has tended to write for larger performing forces, with elements of the stage ever-present in his delivery, so it came as no surprise to report the easy transfer of his music to arrangements by Max Moston for voice and orchestra, Wainwright here renewing his acquaintance with Britten Sinfonia. That Wainwright is blessed with an unusually probing voice helps enormously, providing the balance is right. The first song, ‘April Fools’, was not such a case, the orchestra amplified too much: Wainwright could only just be heard and he stumbled over some of his lyrics. This shaky start was rectified by the rather beautiful ‘Sometimes You Need’, the voice complemented by glassy vibraphone and strings that shimmered in the half-light. Moston’s imaginative orchestration added Broadway sheen and glamour, and while occasionally too fussy, gurgling marimbas confidently led-off a wistful account of ‘The Art Teacher’ before offering a soft clarinet and bassoon for ‘Friendship’, a new song that appeared to be a work in progress but was subtly moving all the same. 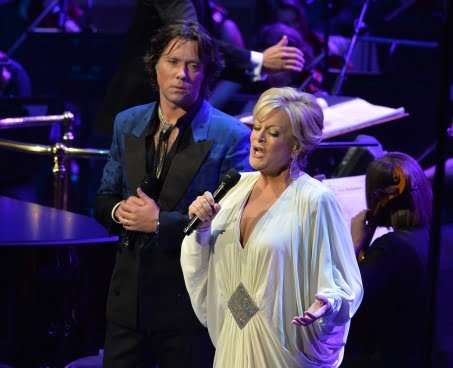 Wainwright has written an opera, Prima Donna, and is working on a second, Hadrian. From the first work we heard two arias, for which Deborah Voigt lent her full tones, after an expansive introduction from the host. Regret hung over the distinctive motif of ‘Quand J’étais jeune étudiante’, a lament exaggerated by the singer’s wide vibrato, before the sizeable orchestra was overpowered by ‘Les Feux d’artifice t’appellent’, Voigt channelling the spirit of Brünnhilde.

The singers then realised their unexpected chemistry in a duet, ‘If I Loved You’, from Rodgers & Hammerstein’s Carousel. Unfortunately while their stage-play was amusing the music was scrappily dealt with and also out of tune, and Wainwright’s lightly outrageous asides detracted.

Order was restored as Wainwright turned to the piano for a much more meaningful selection of his finest songs, again with the Britten Sinfonia in tow under the watchful eye of Johannes Debus. ‘Going to a Town’ made its stark and brave soul-searching of America over nicely pointed nocturnal murmurs, then ‘I Don’t Know What It Is’ found Wainwright blossoming from intimate asides to piercing clarity, while ‘Cigarettes and Chocolate Milk’ was more confessional, its nub a hook that refuses to go away once heard. Wainwright then interrupted the start of ‘Poses’ to insert a dedication to Neil Tennant – the Pet Shop Boys he cites as a lasting influence – before the final ‘Oh What A World’, the song that introduced him in the UK, sung with a pure tone to the rasps of tuba and trombone, added vulgarity to the proceedings. Finally, as an encore, we heard Arlen and Harburg’s ‘Over the Rainbow’ from The Wizard of Oz, sung slowly but with affection and commendable poise, Wainwright lost in his own thoughts.