Skip to content
LnRiLWNvbnRhaW5lcltkYXRhLXRvb2xzZXQtYmxvY2tzLWNvbnRhaW5lcj0iYThhNzRmYzkxMDFhMTMyNTcwNDM5Y2IyY2U4NDZhZDEiXSB7IHBhZGRpbmc6IDI1cHg7Ym94LXNoYWRvdzogNXB4IDVweCAxMHB4IDAgcmdiYSggMzEsIDIyNCwgMTg2LCAwLjUgKTtib3JkZXI6IDJweCBkb3R0ZWQgcmdiYSggMzEsIDIyNCwgMTg2LCAxICk7IH0gLnRiLWZpZWxkW2RhdGEtdG9vbHNldC1ibG9ja3MtZmllbGQ9ImRhZmQxZmU1MWExNTZkYWUzMDQxMDg3MjExY2YzNDYzIl0geyBiYWNrZ3JvdW5kLWNvbG9yOiByZ2JhKCAyMzgsIDIzOCwgMjM4LCAxICk7Ym9yZGVyLXJhZGl1czogMDtwYWRkaW5nOiAxMHB4OyB9IA==
LnRiLWNvbnRhaW5lcltkYXRhLXRvb2xzZXQtYmxvY2tzLWNvbnRhaW5lcj0iYThhNzRmYzkxMDFhMTMyNTcwNDM5Y2IyY2U4NDZhZDEiXSB7IHBhZGRpbmc6IDI1cHg7Ym94LXNoYWRvdzogNXB4IDVweCAxMHB4IDAgcmdiYSggMzEsIDIyNCwgMTg2LCAwLjUgKTtib3JkZXI6IDJweCBkb3R0ZWQgcmdiYSggMzEsIDIyNCwgMTg2LCAxICk7IH0gLnRiLWZpZWxkW2RhdGEtdG9vbHNldC1ibG9ja3MtZmllbGQ9ImRhZmQxZmU1MWExNTZkYWUzMDQxMDg3MjExY2YzNDYzIl0geyBiYWNrZ3JvdW5kLWNvbG9yOiByZ2JhKCAyMzgsIDIzOCwgMjM4LCAxICk7Ym9yZGVyLXJhZGl1czogMDtwYWRkaW5nOiAxMHB4OyB9IA==
“Staff Benda Bilili are like nothing you have ever seen or heard before: a group of paraplegic street musicians and ex-street kids from the Democratic Republic of Congo, making music rooted in Soukous (or African rumba) with elements of old-school rhythm and blues, reggae and funk. ‘Afropean’ Congolese-born, Belgian-educated rapper Baloji mixes old and cutting-edge sounds with bitingly modern lyrics. But his most recent album finds him returning to his motherland in search of musical understanding and communal improvisation.” [BBC Proms website]
LnRiLWNvbnRhaW5lcltkYXRhLXRvb2xzZXQtYmxvY2tzLWNvbnRhaW5lcj0iYThhNzRmYzkxMDFhMTMyNTcwNDM5Y2IyY2U4NDZhZDEiXSB7IHBhZGRpbmc6IDI1cHg7Ym94LXNoYWRvdzogNXB4IDVweCAxMHB4IDAgcmdiYSggMzEsIDIyNCwgMTg2LCAwLjUgKTtib3JkZXI6IDJweCBkb3R0ZWQgcmdiYSggMzEsIDIyNCwgMTg2LCAxICk7IH0gLnRiLWZpZWxkW2RhdGEtdG9vbHNldC1ibG9ja3MtZmllbGQ9ImRhZmQxZmU1MWExNTZkYWUzMDQxMDg3MjExY2YzNDYzIl0geyBiYWNrZ3JvdW5kLWNvbG9yOiByZ2JhKCAyMzgsIDIzOCwgMjM4LCAxICk7Ym9yZGVyLXJhZGl1czogMDtwYWRkaW5nOiAxMHB4OyB9IA== 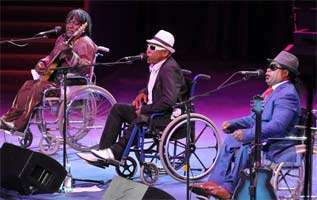 A concert carefully timed to coincide with the Paralympics welcomed Staff Benda Bilili to the Proms. An extraordinary collection of paraplegic Congolese street musicians and ex-street kids, Staff Benda Bilili has now achieved international fame and been the focus of a feature-length documentary. Success came swiftly. Three years ago the members were living in box rooms and at times even the streets, in Kinshasa, capital of the Democratic Republic of Congo. As their manager said: “Kinshasa is a city of dreamers, and they are the biggest dreamers there.”

The group’s Hollywood-style rise began eight years ago when a pair of French documentary makers stumbled across them busking at a roundabout downtown. The pair had been filming street musicians for the past month, from shégués (street kids) to prostitutes to pot-smoking soldiers, when they found Ricky Likabu and his band. Likabu is disabled, wheelchair-bound since contracting poliomyelitis as a child. Three other members of the group are paraplegic, singing and playing guitar from tricycle wheelchairs, whilst a fourth is reliant upon crutches. The resultant documentary Benda Bilili! received critical acclaim, and allowed the group’s debut album “Trèstrès fort” to make international ripples. Already this summer they have appeared at the pre-Olympics festival, BT River of Music, and will shortly be touring worldwide. 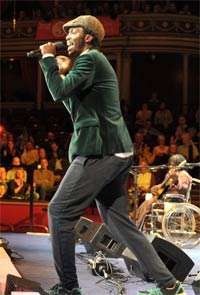 Staff Benda Bilili draw elements from rumba, enormously popular in the Congo, blues, reggae, R&B and ska. Theirs is World Music as conceived by the record industry: international, and with warm, round edges. Their unique contribution is a homemade electric lute, built by former shégué Roger Landu as a boy. He was apparently inspired by similar instruments such as the mouth-bow of the Baka Pygmies, a popular instrument amongst Pygmy street buskers. Landu named his instrument a satongé, after the one-eyed demon of Congolese folklore. It is fashioned from an old powdered-milk tin can with an open lid – the ‘eye’ of the demon instrument –and no bottom, which Landu combined with a length of wood cut from a fish basket to make a neck. He then strapped a length of bicycle brake wire to the body, and the uni-stringed lute was born. Landu now uses amplifiers and plays with fierce dexterity. The instrument itself makes a high-pitched screeching noise, much like the upper registers of an electric guitar.

The musicians were joined, briefly, by Congolese-born, Belgian rapper Banjoli. This was his first appearance with the group. He meandered on, tall, spidery and suave, partway through the fourth number (names of songs and translations of texts were not provided) enlivening the evening with his harsh, hip-hop-infused rap. He had been billed as a main part of this concert and it was a shame that he was not given a bigger role. Much of his ten minutes was spent weaving between the instrumentalists with an appealing swagger.

The story behind Staff Benda Bilili’s appearance is fascinating, and yet it was not given space. There needed to be solos for Landu’s satongé, to bring this to the audience’s attention. The members needed to be introduced individually, so that the audience could engage with them, and they with the audience at the back of the stage. Landu looked uninterested, and was continually fidgeting with his amp. Better balancing would have allowed for varied sounds and textures. Instead the overall effect was simply loud.