“In the last of this year’s Proms collaborations with six of the BBC national radio stations and BBC Music, popular Radio 4 show Wireless Nights descends into an underwater dream with Jarvis Cocker, on a voyage through the night, with songs by The Beatles, Tim Buckley and Echo and the Bunnymen, and music by Bach, Debussy, Saint-Saëns and Wagner.” [BBC Proms website] 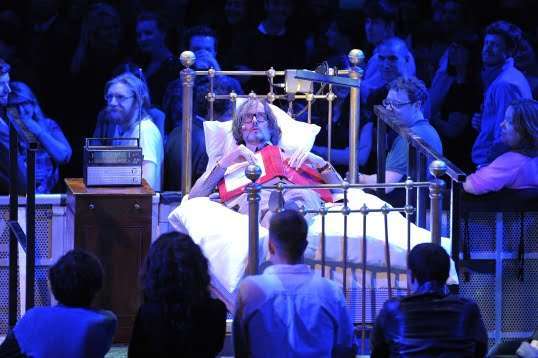 The last in this Season’s late-night Proms collaborations was an ambitious undertaking. Jarvis Cocker’s Radio 4 programme Wireless Nights, featuring the nocturnal habits and musings of the British public, came to the live setting of the Royal Albert Hall.

Themed as a descent into an underwater dream and guided by Cocker’s droll narrative, this production presented a charming and whimsical proposition. The performance started while the audience filled the auditorium, the scene-setting being of an underwater ambience of subdued blue fluorescent lighting and creaking sound-effects resonating through the domed space.

The BBC Philharmonic segued gently into the calming mood, opening with the soft, dreamy strings of John Adams’s Shaker Loops as Cocker made his grand entrance on a bed rising from a pit. And so Cocker began his recitation, a “voyage to the bottom of the sea and to the bottom of ourselves”, analogous to the unconsciousness which we all tap into during the small hours. 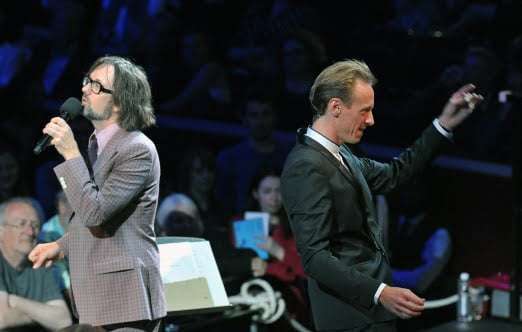 This intriguing concept didn’t quite hit the mark. Cocker’s delivery felt a little flat at times, and his humour came across as too rigidly scripted. The main issue which detracted lay in the production’s structure. The weaving of narration, music and pre-recorded stories felt too cobbled together. In themselves each component was inherently sound but failed to blend together as a whole.

The stories were fascinating and the audience was held rapt with the underwater tales, embracing the ability of dreams to morph into nightmares. Sam the diver’s story featured her descending deeper and deeper in a single breath, seduced by the desire to explore greater depths at the risk of delving too deep to resurface. Roger’s tale recounted his near-death experience when trapped in a submersible with his colleague (also called Roger) and running out of air. The third contributor, Clyde spoke of his ongoing underwater expeditions in search of the elusive giant squid.

There were also several surprising musical interludes. The comforting familiarity of Ronald Binge’s Sailing By was an effective way to draw the audience into a somnolent mindset, while John Williams’s Theme for Jaws was dramatically rendered and amusingly deployed at the perilous point of a contributor’s story. Cocker’s spoken rendition of Aqua Marina also drew delighted chuckles.

The BBC Phil’s contribution (including The Flying Dutchman Overture, Debussy’s The Engulfed Cathedral orchestrated by Colin Matthews, and Echo and The Bunnymen’s Ocean Rain) had the strongest impact by far and Richard Hills’s organ solo of The Kraken Awakes was simply thrilling. All in all, despite lacking flexibility, Wireless Nights was an intimate and enjoyable fantasy of bedtime stories for grown-ups, replete with choral lullabies.