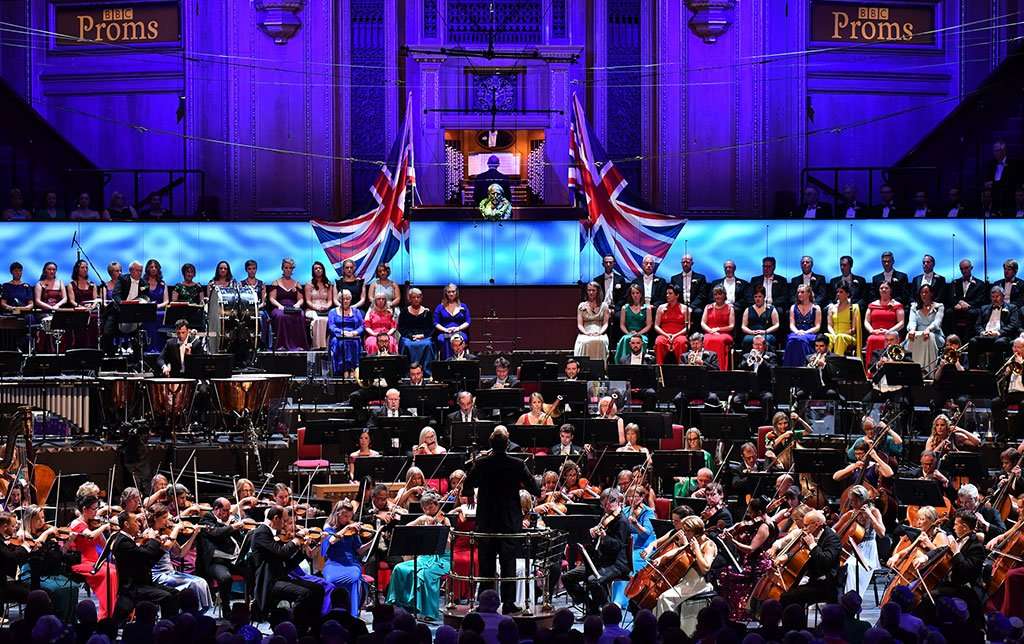 And so to the Last Night of the Proms. From one of the best new commissions as an opener, via a surprising wordless paean to democracy and a vocal soloist who nailed bisexual politics to the mast in her final outfit, this year’s repertoire seemed quietly seditious. But the musical choices were more satisfying than usual, especially in the first half. There was a nod to Sir Henry Wood’s 150th-birthday, music he introduced, here Elgar’s heartfelt Sospiri acting as the fulcrum of the first half, first heard on the eve of the First World War. That had been immediately preceded by two women composers – a thread also expertly knitted through the season – in an a cappella (BBC Singers) version of Laura Mvula’s Sing to the Moon, beautifully rendered, and the belated (by fifty-six years) Proms premiere of a lovely musical travelogue by Elizabeth Maconchy, Proud Thames.

If the Spanish flavour of the first half seemed a little arbitrary, who could complain when Sakari Oramo and especially his percussion department suffused the Falla with irresistible rhythms, and Jaime Barton proffered her chocolaty, velvety mezzo to the selected arias. The first half ended with additional trumpets for the ‘Triumphal March’ from Verdi’s Aida. 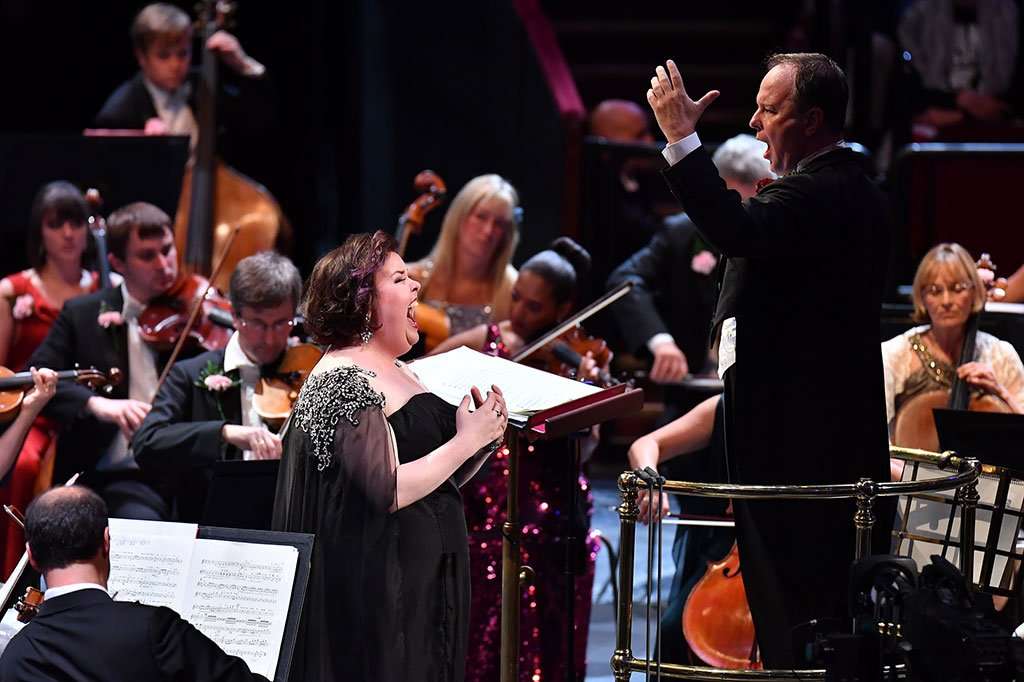 At the opening of the second half there was a late and far too small nod to a bicentenary, that of Jacques Offenbach, his Orpheus in the Underworld Overture. Perhaps even more extraordinarily, it’s only the second performance of this piece in the Proms’ 125-year history, its first outing in 1990 under Rozhdestvensky. I wonder why, when it’s so enjoyable, encompassing some beautiful woodwind solos (Richard Hosford’s clarinet, Tom Bloomfield’s oboe) then one for leader Igor Yuzefovich. The climax – the Can Can – had Oramo occasionally kick (though not high).

The next item must rank as one of the weirdest entries onto the Last Night roster – Percy Grainger’s vocalise Marching Song of Democracy; a seven-minute collision of singers intoning “Ta rar dira dira” and “Dum pum pum pum” against each other, building to a climax that would have deafened even the most robust Parliamentary debate. It was like an encapsulation of Mahler’s Eighth Symphony though with only some dim memory of Goethe’s text.

In a second black dress, Barton returned, this time with head microphone, for a Judy Garland classic, ‘Somewhere over the Rainbow’ and Gershwin’s ‘I’ve Got Rhythm’. There was no surprise that Barton was equally as successful in musical numbers as operatic ones (not every opera singer can make the switch), and the Gershwin proved that Barton and the BBC Symphony (with its additional saxophones for this one selection) might have rhythm, but most seated audience members who tried to clap along certainly don’t. 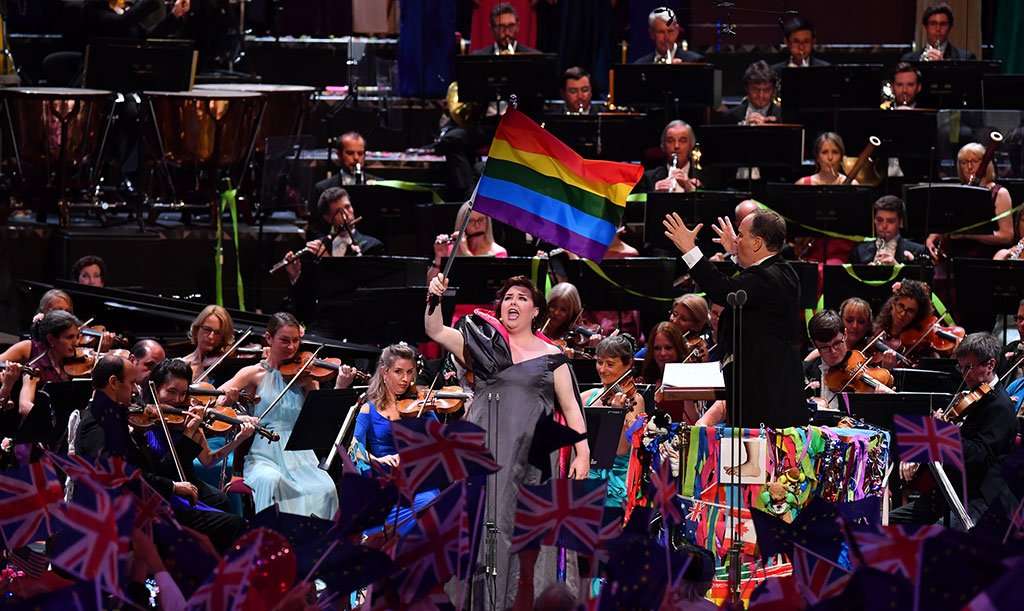 That fact was reinforced in the ‘Hornpipe’ of Wood’s (here foreshortened) Fantasia on British Sea Songs and also in the lamentably disrupting horn blasts at the end of ‘The Saucy Arethusa’, ‘Tom Bowling’ and the ‘Home Sweet Home’; the music is much more enjoyable without percussive embellishment. And while I have no objection of filleting-in of songs from Ireland, Scotland and Wales, surely there is now a case for finding an alternative to Danny Boy.

To cap the Fantasia it was Malcolm Sargent’s version of Arne’s Rule Britannia!, Barton now swathed in a dress including bisexual colours (blue and magenta) in a wraparound flap and an enormous half ruff, producing a rainbow Pride flag for the final chorus. 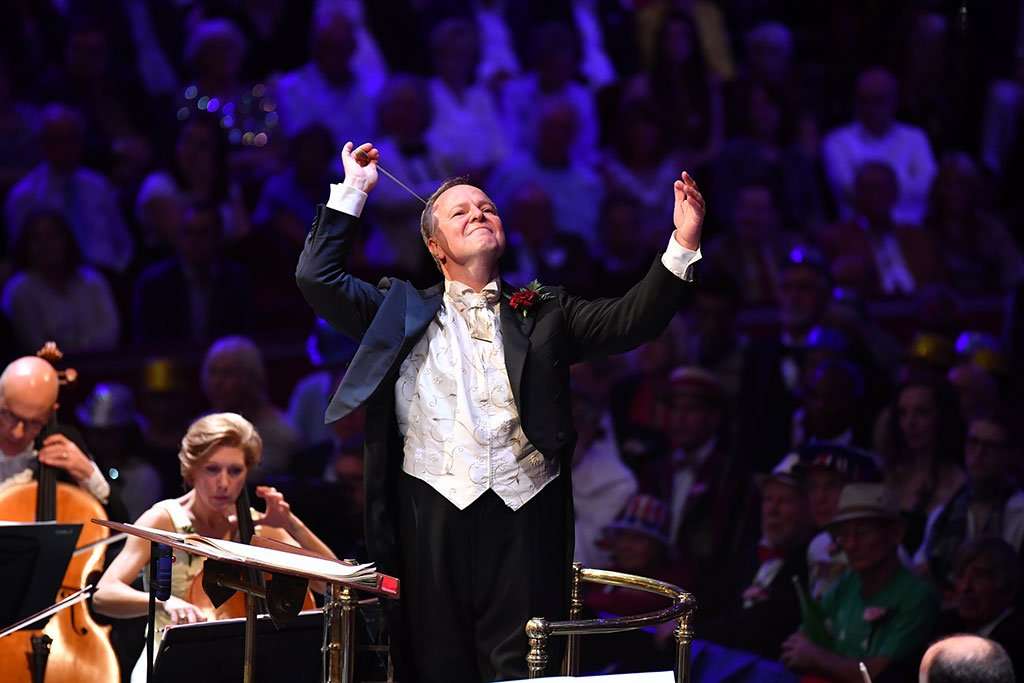 Oramo’s speech was a heartfelt plea for our collective support for live performances, building on Sir Henry’s proselytising zeal. As is traditional the remainder of the concert ran to form. But I end at the beginning, with Daniel Kidane’s Woke, the title reminding us to be constantly aware of racism, but the music is inherently interesting in itself, kick-started by a wood-block (like a woodpecker) and teeming into life with long-held strings and chattering parts underneath, eventually coming to a unanimous halt before more rat-a-tat-tat pulses reigniting the music, before eventually building to a ringing climax, though not before the modern plastic equivalent of the ancient bullroarer made air. Electrifying and energising.

Perhaps one reason why this Last Night seemed a mite less lively – amidst the fewer balloons and flags – was the absence of shouted repartee from the Prommers. There was one such highlight, but that came from the tenors of the BBC Symphony Chorus who followed the charity advice (£115,000 before the collection after the concert), with an endorsement of their own, appealing for “tenners”.