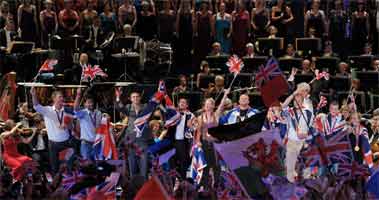 With Team GB anticipated as doing so well it is hardly surprising that the Last Night of the Proms celebrations had the Olympics as one of its focal points and included Josef Suk’s Towards a New Life (which won first prize in a music competition at the 1932 Los Angeles Games) and John Williams’s Olympic Fanfare and Theme (also for the LA games, but in 1984).

The ‘serious’ first half opened with Mark Simpson’s energetic fanfare, sparks. I saw Simpson at the 2007 Proms in the Park – a bespectacled 18-year-old who gave a spectacular performance of Artie Shaw’s Concerto for Clarinet. The glasses now gone, Simpson, who shot to fame in 2006 as the winner of the both the BBC Young Musician of the Year and the BBC Proms/Guardian Young Composer, is clearly as gifted a composer as he is clarinettist. Starting and ending quietly (a major triad at the end) the four-minute sparks layers textures to produce a dense mass of sound that grows and then dissipates. A “Respighi-like” section about two-thirds of the way through, while demonstrating Simpson’s unquestionable skill as an orchestrator, gives welcome relief from the bombardment of sound before briefly returning to the earlier cacophony.

Suk’s Towards a New Life (1920) was first written as a patriotic march dedicated to the Czech army fighting to protect the southern districts of Slovakia. Suk entered the piece into a competition organised by the Sokol movement where it won a prize. Subsequently he arranged it for orchestra and, breaking the rules, entered it for the Olympics. At the Proms it was given in an unusual version with chorus. The opening fanfares became an opportunity to place the wreath around the bust of Sir Henry Wood. Amongst the countless Union flags, one solitary Czech flag was waved in the Arena. The BBC Symphony Chorus was in fine voice, Czech pronunciation taken in the singers’ stride. A confident BBC Symphony Orchestra rose to the occasion.

Moving swiftly on (Jiří Bělohlávek clearly aware of the length of the concert), next up was Delius’s Songs of Farewell. The composer had started composition on these settings in 1920 but had put them to aside to concentrate on his incidental music for James Elroy Flecker’s play Hassan. By the late 1920s Delius was blind and paralysed and it fell to an unknown composer and organist, Eric Fenby, who was an admirer of Delius, to assist him in his last years as unpaid amanuensis. Possibly their greatest joint production are these choral songs, settings of fragments of poems by Walt Whitman chosen and edited by Delius’s wife Jelka, to whom the work is dedicated. 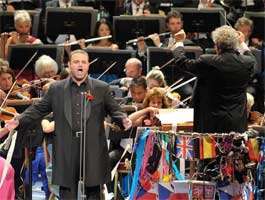 Delius uses the human voice more as a part of the ensemble; however the words sung by the BBC Symphony Chorus were largely inaudible and therefore gladly printed in the programme. The balance between chorus and orchestra was good in a performance only let down by an audience that insisted on applauding each number.

With Joseph Calleja, Bělohlávek and the BBCSO were at the top of their game in this sensitively accompanied account of Verdi. The film The Great Caruso starring Mario Lanza inspired Calleja and he is now one of the finest singers today. Crystal-clear articulation here combined with an ideal tempo to produce a heartfelt and lovely performance and also of the Massenet.

The night’s second soloist, Nicola Benedetti, entered and left the stage to rock-star adulation; however this performance of Max Bruch’s First Violin Concerto had its problems, 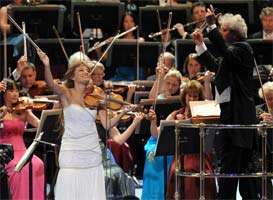 Benedetti losing connection with the orchestra on more than one occasion (no eye contact between her and the conductor) and being scrappy in the finale. While she does not have the power needed for the concerto’s louder parts, the introspective second movement fared better in this sensitive performance.

To end the first half, Calleja returned with well-known arias by Puccini. Tosca and Turandot were written some twenty years apart each with heroic tenor roles (Cavaradossi and Calaf respectively). Calleja was magnificent in despair as Cavaradossi faces the firing squad in the fortress Castel Sant’Angelo; however he was less comfortable in a rushed ‘Nessun dorma’ and struggled to sustain the longer notes. 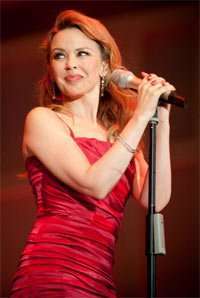 After the interval there came the party (and the various Proms in the Park were in full swing, too, not least in Hyde Park where Sir Terry Wogan was the host and guests included Kylie Minogue). John Williams’s Olympic Fanfare came after his success for scoring such Hollywood blockbusters as Star Wars, Close Encounters and Raiders of the Lost Ark. The Olympic brief was challenging – larger ceremonial trumpets (Herald trumpets) would play the opening and the music also needed to be broken into fragments for use in commercial breaks. Williams satisfied the demands writing music that is bright and optimistic that leads to a triumphant conclusion. As it had done throughout the evening, the BBCSO sparkled, now in the second Czech work, written by Suk’s father-in-law Dvořák, the glittering Carnival Overture. This was a particularly fine, richly homogenous performance. 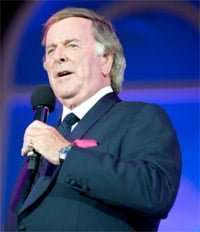 Benedetti returned with ‘Romance’ from Shostakovich’s music for the film The Gadfly written in 1955 between his Tenth Symphony and First Cello Concerto. The consoling mood of the piece suited well Benedetti’s reflective style of playing. Then Calleja joined her in an arrangement for violin and tenor of Leoncavallo’s most-famous Neapolitan song Mattinata (Morning). This was the first piece written expressly for the Gramophone Company (now EMI) and was dedicated to Enrico Caruso, who recorded it, with the composer at the piano, in 1904. Colourfully orchestrated, it fitted Calleja perfectly. Benedetti’s part was more of an obbligato rather than an equal to the tenor; however this was an enjoyable diversion that presented an opportunity to give thank-you gifts to the two soloists.

Agustín Lara’s Granada is a vivid depiction of the southern Spanish city by a Mexican-born composer. Twenty years after writing it he made his first trip to Spain and was taken to Granada where he declared that everything in his song was true! All that was missing from the brass section of the BBCSO were sombreros, the musicians happily embracing the soundworld of the Mariachi band. Forcefully articulated with exaggerated dynamics, this was a fun-filled frolic. Rodgers and Hammerstein’s ‘You’ll never walk alone’ gave the audience an opportunity to have a sing. Led by Calleja, everyone was rather too eager to get started so his contribution went largely unheard. 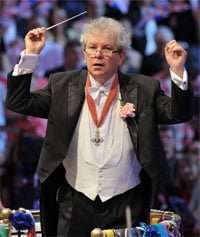 Henry Wood’s Fantasia on British Sea-Songs made a slightly truncated return to the Proms. Missing was the clarinet cadenza, usually found before ‘Home, sweet home’; and Malcolm Sargent’s fuller arrangement of Rule, Britannia! made a welcome return, too, following Arne’s original. As usual, bangs, hoots and other such noises added to the performance though noticeably more off-the-beat than usual (a sign of declining musical standards in schools?). Calleja sang Rule, Britannia! bedecked in a Union Jack-emblazoned tracksuit, the jacket of which he opened to reveal a Maltese Cross on his T-shirt (as someone recently said, “don’t make a Maltese cross”!).

In his speech Jiří Bělohlávek offered many thanks to the audience, fellow artists and, of course, the BBC Symphony Orchestra. Not to be outdone by the Olympic medallists (winners from the various rowing events made an appearance), Bělohlávek brought his own – the honorary CBE that was conferred on him recently in recognition of his services to music as a non-British national. The conductor’s tenure as Chief Conductor of the BBCSO ended with this Prom; he becomes Conductor Emeritus and returns to the Czech Philharmonic. A spontaneous chorus of “For he’s a jolly good fellow…” was quickly followed by Elgar’s Pomp and Circumstance March No.1 (‘Land of Hope and Glory’): the emotional state was high. Hubert Parry’s Jerusalem (using Elgar’s orchestration) came next and finally The National Anthem in the arrangement by Benjamin Britten, so hushed at the beginning.

The 119th-season of BBC Promenade Concerts commences on 12 July 2013, the BBCSO’s new conductor, Sakari Oramo, will be at the helm. I can’t wait!