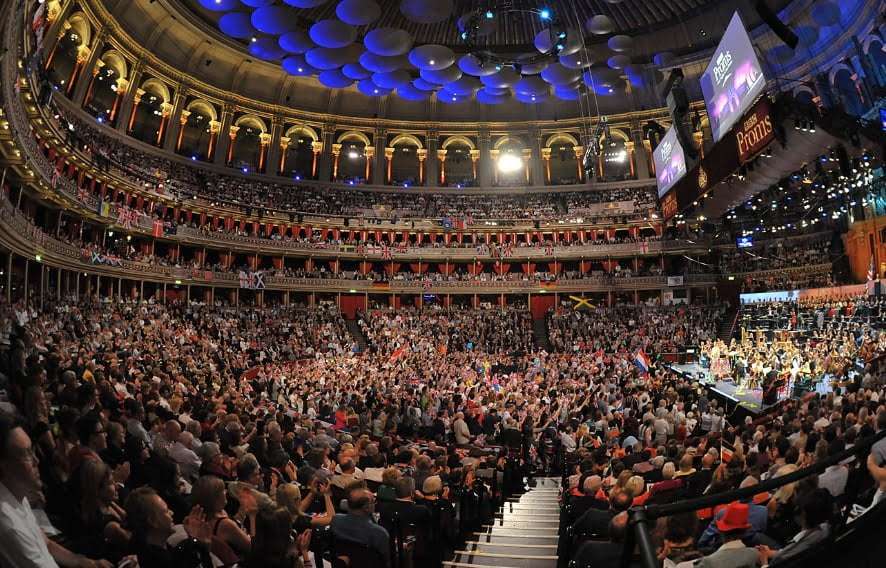 Feeling like it has been only a short time since the opening Prom, this concert saw the culmination of eight packed weeks of music-making that included musicians from around the world, playing musical styles as diverse as they possibly could be. This Prom also marked Sakari Oramo’s first Last Night and, sporting a waistcoat emblazoned with a Union flag, the amiable Finn bounded onto the rostrum to conduct the world premiere of Gloucester-born Gavin Higgins’s Velocity. His second BBC commission for the Proms, Velocity is a fanfare-type piece designed to open the Last Night festivities in celebratory style. A six-note motif, repeated in various guises throughout the five-minute work, is presented by the brass at the start before the music quickly moves into a lively allegro. The piece is not about speed but rather “forward momentum, drive and energy”. Higgins’s use of varied colours is remarkably skilful; his writing accomplished, stylish and gifted – little surprise that he has recently been appointed as Rambert Dance Company’s inaugural Musician-in-Residence.

Malcolm Arnold wrote Peterloo in 1967 as a commission for the Trades Union Congress to mark its centenary. The piece vividly portrays the massacre of 15 pro-democracy reformers in 1819 by armed cavalry. The version here, following a request by Faber Music and The Arnold Estate, adds a choral part (arranged by Ben Parry) to Arnold’s original scoring with lyrics by Sir Tim Rice. The choir starts almost straight away, adding words to Arnold’s chorale tune until the advancing cavalry is heard, growing louder until the chorale subsumed. The music is as shocking as the event it portrays. Arnold captures the horror of the attack through discordant and terrifying music for brass and percussion – depicting the moment that the cavalry arrives, percussion pounding the same hypnotic rhythm. However, the BBCSO seemed reserved – the woodwinds not shrill enough; the brass not snarling enough. The chorus, clear of diction and perfectly attuned with what was required, brought this new version to life. Peterloo is not performed nearly as much as some of the composer’s other works and this version may make it attractive to choral societies – it is a fantastic piece. 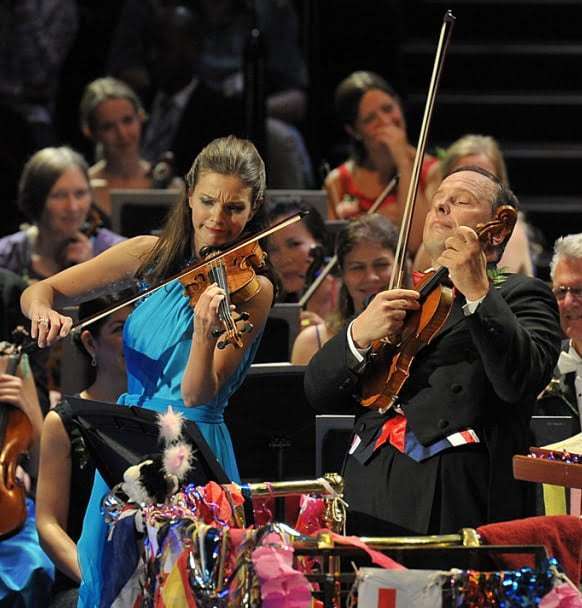 For the second time this week, Walton’s ‘Popular Song’ from Façade has been heard at the Proms (in PCM8 it was performed at Cadogan Hall as originally conceived with Edith Sitwell’s poems). This sprightly performance shone – a jocular woodwind section (including an alto-saxophone as heard in the original) bringing the music to life.

In the first of two appearances at this Last Night, Janine Jansen opened Ernest Chausson’s Poème with a whispering solo that was spellbinding. Sensitively accompanied, this was a beautiful performance of a piece that was commonly heard at the Proms in the first half of the twentieth-century but not since 1982. John Tavener died in November last year and, by way of homage to him, we heard his one of best-known works, Song for Athene. Inspired by the death of a friend, Athene Hariades, who died in a cycling accident in 1993, the piece came to prominence in 1997 when the choristers of Westminster Abbey sang it to accompany the pall-bearers as they carried the coffin of Diana, Princess of Wales. Absolute silence fell as the basses of the BBC Singers, the stage and hall in darkness intoned the Byzantine ‘Ison’ – a drone note – above which the upper voices sang Tavener’s beguiling melody. The final stanza, “Come, enjoy rewards and crowns I have prepared for you” was uplifting and refreshing – the perfect palette cleaner.

To end the first half of the concert, Richard Strauss’s Taillefer – written to celebrate the honorary doctorate that the composer was awarded by Heidelberg University. The work requires huge forces including choir and three vocal soloists, but lasting only eighteen or so minutes, it is unsurprising that it is rarely performed. Taillefer largely draws upon the composer’s earlier compositions, including Ein Heldenleben, and while it is interesting to hear something rare from a great composer it is understandable why a New York Times critic described the piece as “bottom-drawer Strauss … a waste of everyone’s time”. Despite the piece’s shortcomings, Oramo handled the massed-forces with aplomb. 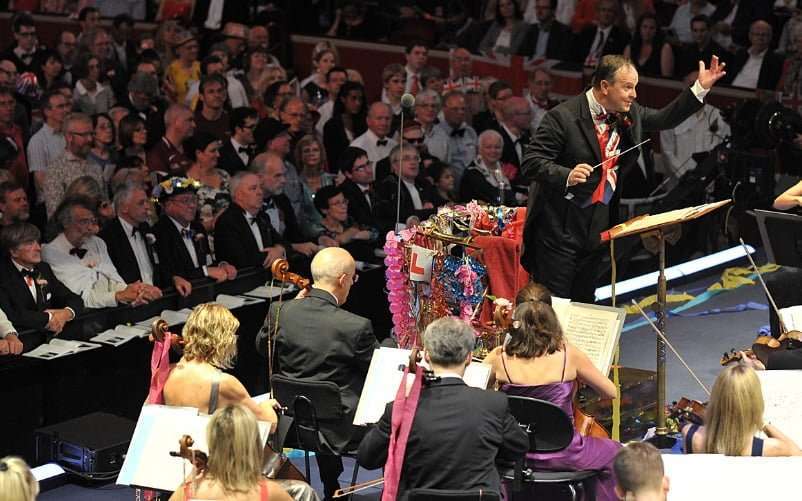 The second half began with an energetic performance of ‘Sabre Dance’ from Khachaturian’s score for the 1942 ballet, Gayaneh. The BBCSO’s regular timpanist, dynamic and speedy from the off, received special recognition at the end from the conductor that was followed by a chant from the Arena: “John Chimes – thank you for the timps.” After nearly forty years in the BBCSO, this was Mr Chimes’s farewell appearance.

Next came Jansen’s second appearance, and a change of dress; she was just as beguiling in Ravel’s Tzigane. Jansen’s impressive technique made light work of this showpiece for violin that was originally intended to be accompanied by a luthéal (a piano-like instrument equipped with stops like an organ). However due to the rapidity at which the instrument fell out of use, Ravel revised the piece for piano and also made an arrangement for orchestra. By way of an encore we heard an arrangement of La Cucaracha (Spanish for The Cockroach) played on two violins as Oramo, an accomplished violinist and formerly leader of the Finnish Radio Symphony Orchestra, joined Jansen in a delightful piece of musical comedy (and reprising their appearance in PCM4). Oramo appeared to be really enjoying the Last Night occasion, endearing himself to the audience, and no doubt to the millions of listeners and viewers.

Roderick Williams returned next to sing two spirituals that he has arranged. This version of ‘Ol’ Man River’ grew out of an arrangement that Jerome Kern made for voice, clarinet and piano – the clarinet obbligato remains a prominent feature in Williams’s orchestration. 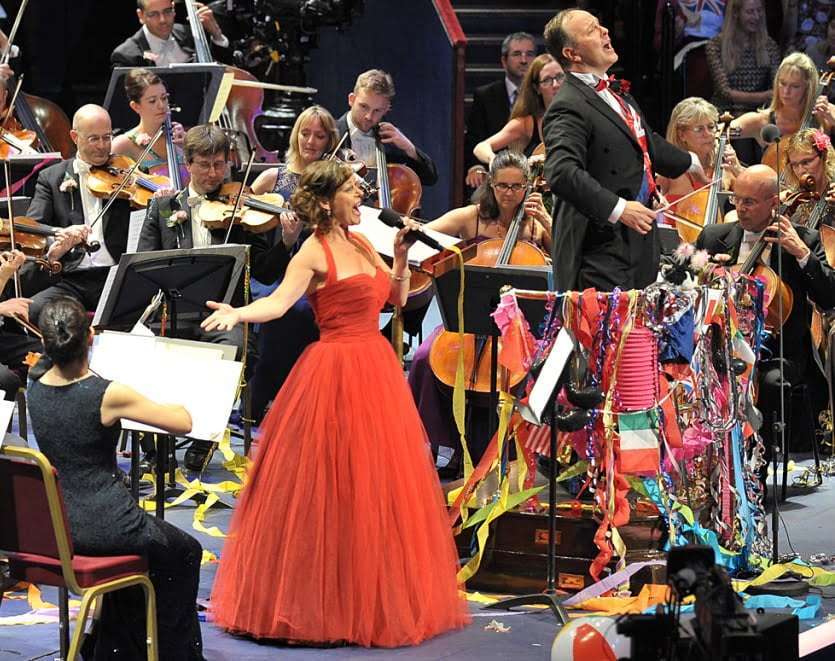 It would almost be impossible to imagine a Last Night without a show-tune or two. While the Kern whetted the appetite, a little magic was needed – with the help of a medley of some of the best-loved tunes from Mary Poppins. Ruthie Henshall used a hand-held microphone; however the sound was projected from speakers at either side of the stage. Hallelujah! The balance was perfect, the sound coming from the vicinity of the soloist and not high above in the gantry. If amplification must be utilised, this was sensible use of it. This stylish arrangement (by Anne Dudley) included ‘A Spoonful of Sugar’ and ‘Let’s go fly a kite’, and ended with ‘Supercalifragilisticexpialidocious’. Mindful of the key-changes (Oramo warned us beforehand and promised to help point them out) the words found in the programme “with audience participation” were taken at face value as the Sherman brothers’ music and lyrics rang out loudly, fifty years after the film was released.

In place of Henry Wood’s Fantasia on British Sea-Songs, John Ansell’s Plymouth Hoe (1914) proved a worthy alternative. Beautifully crafted, Ansell’s music begins with the sailor’s hornpipe (‘Jack’s the Lad’) – a tune that Wood also used. There were plenty of opportunities for the orchestra’s soloists to shine, most notably for clarinettist Richard Hosford. The piece ends with a flourish of ‘Rule, Britannia!’ – the perfect introduction to the ‘beginning of the end’ starting with the Arne in Malcolm Sargent’s full-on version, Roderick Williams returning who had changed out of the ‘farm worker’ dungarees he had donned earlier.

Between the Arne and Elgar’s Pomp and Circumstance, Sakari Oramo gave his address. This must be the scariest part of the Last Night for any conductor. Oramo, in excellent and idiomatic English, appeared to take the whole thing in his stride and saluted the conductors and performers heard during this season, and the audiences. After announcing that a staggering £89,700 has so far been raised by Promenaders for musical charities, Oramo self-mockingly said that he had been told to say something that was personal to him, “However, I am Finnish and we don’t talk very much”. Taking off his jacket, he revealed the full extent of the Union flag on his shirt and then turned around to reveal the Finnish flag on the back! This was an auspicious Last Night for Oramo.

A final flurry of Elgar and then Hubert Parry’s Jerusalem, the now-regular Benjamin Britten arrangement of the National Anthem and the 121st Season of BBC Proms was over – the next starts on Friday July 17. As ‘Auld Lang Syne’ rang around the Royal Albert Hall, it was a good time to remember Roger Wright who relinquished his tenure as Director of the BBC Proms on the opening night, at the same time leaving us with many memorable concerts. His shoes will be hard to fill; thank you Roger and we wish you well in your new role as Chief Executive of Aldeburgh Music.