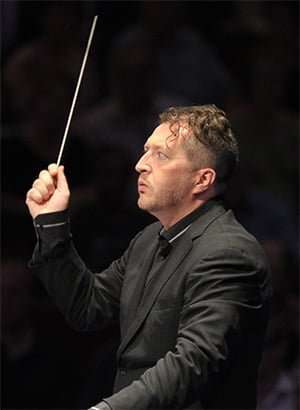 Thomas Adès’s Proms appearances as a conductor over the past fifteen years have also provided an overview of his evolution as a composer, and this concert – which featured the premiere of his latest work along with major pieces by figures whose centenaries fall this year – made for a statement of no mean intent as regards his creative and executive capacities.

The premiere was of Totentanz (2013) – the setting of an anonymous 15th-century text that was once the commentary to a now-destroyed frieze in which Death visits a succession of people who represent the arrayed social strata of the medieval era, and the responses thereof. Despite its utilising male and female voices, this is not a song-cycle so much as a dramatic scena in which 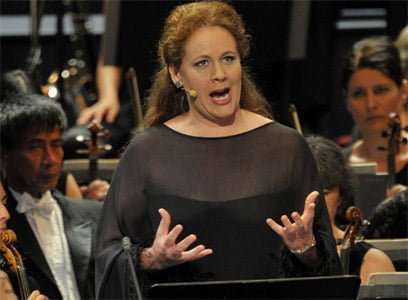 loss is variously considered in the context of a ‘dance of death’ that motivates the greater discourse. While each of those visited is allotted a specific musical expression, moreover, the initial call-and-response is gradually blurred as vocal parts are overlaid in an intensifying of activity towards an orchestral climax of seismic impact. From this point the piece conceivably loses focus in that characterisation of the remaining protagonists seems to break up the accrued momentum, though there is no mistaking the plaintive sensuousness of the encounter with the Maiden or the disarming naïveté of that with the Child as the music wends its weary Mahlerian way towards the close. Adès has been voluble during recent years in his praise for Gerald Barry, and the latter’s example is evident throughout a score in which no incident can be taken at face value but is also interpretable from different and even competing perspectives. This duly serves to open-out the range of expression while, at the same time, making it ambivalent to the point of disingenuousness. 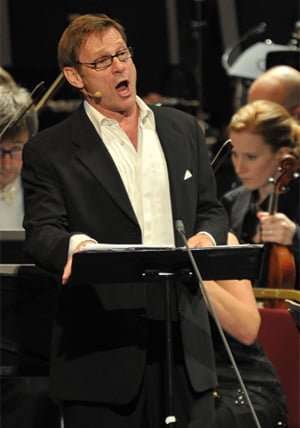 The performance appeared to meet the work’s challenges head on. Even with a degree of amplification, the solo voices (singing in German) were often hard to take in against the large and intricately deployed orchestral forces, though it might have helped had Christianne Stotijn’s vibrato been more sparing, while (not for the first time) Adès seemed intent on writing below what is comfortable for Simon Keenlyside’s range. The BBC Symphony Orchestra coped ably with the avowedly virtuosic orchestration, attentively guided by the composer, and the work as a 32-minute whole had a conviction not always evident in Adès music during recent years – not least in its renewed desire to bring the flippant and the earnest into an unlikely yet productive accord. 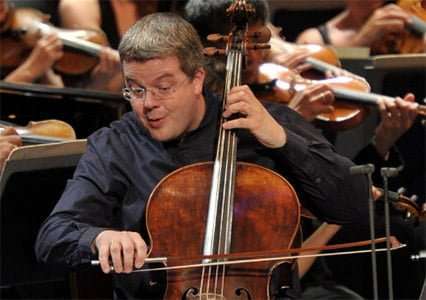 Whether the defining orchestral outburst in Adès’s score was suggested by that towards the close of Lutosławski’s Cello Concerto (1970), the latter’s inclusion reminded of the qualities of a work which has received more than its fair share of extra- (should that be anti-?) musical interpretations. Paul Watkins was impressively attuned to its vivid reimagining of the archetypal relationship of soloist and orchestra whose four continuous sections proceed from a laconic ‘Introduction’ for the soloist alone, via a barbed and often aggressive series of ‘Episodes’ that involve varying orchestral sections (each marked off by brass fanfares) then a raptly expressive ‘Cantilena’ where the soloist is enfolded within a subdued overall texture, to a ‘Finale’ that translates the cello’s initial Ds into sustained hammer-blows from whose assault the soloist only belatedly emerges for a closing assertion where desperation and defiance are as one: transcending the outward ‘situation’ by dint of sheer bloody mindedness. Watkins’s tensile account of the brief Sacher Variation (1976) then made for an ideal encore.

Adès proved an insightful accompanist, having earlier presided over a fine if hardly incandescent account of Britten’s Sinfonia da Requiem (1940). A commission from the Japanese government to commemorate the 2,600th-anniversary of the Mikado dynasty that became a private memorial to the composer’s parents, the piece is an assured compendium of influences over the preceding decade. Adès had the measure of the sombre ‘Lachrymosa’ with its anguished climax, and if control of tension in the visceral ‘Dies irae’ was not all it might have been, the ‘Requiem aeternam’ brought a measure of release in an imploring apotheosis that held good as the music subsides into its own Mahler-tinged serenity.