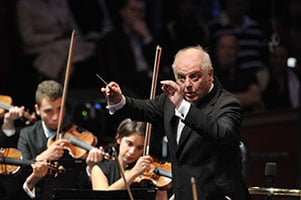 It says something for the combined pulling power of the BBC Proms, Beethoven, Pierre Boulez and Daniel Barenboim that the German composer’s first two symphonies (which perhaps lack the cachet of the ‘Eroica’, ‘Pastoral’ and ‘Choral’ examples, and the motto-familiar Fifth) – together with a substantial and challenging piece by the French master – should not compromise the Royal Albert Hall being sold-out and with scarcely a space in the Arena.

Barenboim and his youthful Middle East orchestra, made up of all persuasions and denominations, put music first and foremost, here a coming-together through Beethoven’s formidable messages of humanity and reconciliation. Barenboim is an old-world conductor of such propositions (displaying on occasion elements of his stated allegiances to Celibidache – sound, shading and not-of-the-clock time – and Furtwängler – flexibility and transitions); he gives the music and its significances space to be fully articulated; romantic and weighty rather than slavishly ‘authentic’. 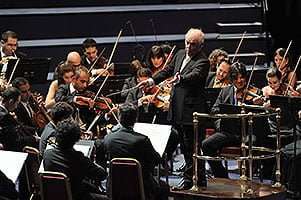 Both symphonies were given with moderate tempos (yes!), much rhythmic point, shapely expression and ear-catching dynamism. But we needed more strings than twelve first violins down to ‘just’ four double basses (six minimum, hopefully eight for the later works) – simply not enough for this place and acoustic. Repeats were arbitrary: that ‘lost’ in the second movement of No.1 is perhaps neither here nor there, but to not hear twice the exposition of No.2’s first movement is a rather more contentious omission.

Nevertheless, the Haydnesque elements of the First Symphony and the proto-‘Eroica’ tendencies of the Second were given full value. Both performances revelled in the music. Of particular import was the unhurried force and crispness of the D major work, the coda of the first movement uplifting and the slow movement phrased with sovereign loveliness (if here lopsidedly long in relation to its shortened predecessor).

All change for Boulez’s Dérive 2, which has been heard in London several times. In 2004 the composer directed members of the LSO in a 25-minute ‘in-progress’ version (its composition had begun in 1988). Boulez found the definitive form in 2006. Susanna Mälkki conducted it at the Proms in 2007 and Boulez himself took charge of a performance in the Queen Elizabeth Hall in December 2008, part of a concert celebrating Elliott Carter’s 100th-birthday: Dérive 2 is dedicated to the eminent American composer. 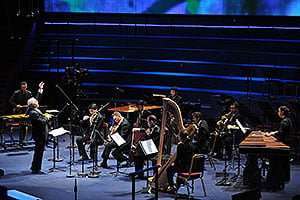 Dérive 2 is scored for string trio, piano, harp, two percussionists (one occupied by a xylophone and the other by a marimba), clarinet, horn, cor anglais and bassoon. The music’s sheer energy and incident is exhilarating in itself. Playing continuously for 45 minutes – and demanding equally of performers and listeners – one might hear Dérive 2 as being in three sections (of roughly 20, 15 and 10 minutes respectively), the middle one being a ‘slow movement’ of alluring fantasy-like reflection cueing invention and colourings that remind (possibly consciously) of Carter’s own music. The pulsating ‘first movement’ is sustained over many stimulating pages, the ‘finale’, when reached, is something of a recapitulation that accelerates to the full-circle culmination, a return to the horn’s ‘A’ (now augmented) that launches the piece, to close a journey of considerable thrall.

The chosen musicians from the Divan’s ranks traversed this satisfyingly complex piece with remarkable acumen under Barenboim’s assured and committed direction; invidious perhaps to single out the players of the cor anglais and of the viola. This performance lasted just over 48 minutes (the composer took quarante-cinq minutes, exactement), but those 180 extra seconds were well-tailored to the Hall, the instruments carrying extremely well, be it the diaphanous textures and Stravinskian flourishes or the richly lyrical writing and the palpable vigour and extra impetus that signals the affirmative conclusion.

Beethoven and Boulez pair well. Decca has recently issued a box of Barenboim’s complete Beethoven symphonies with the Divan Orchestra (recorded last August; Symphony 2 is better proportioned) and the BBC is giving the fullest audio, visual and internet coverage to this five-Prom cycle. Just goes to show, as Barenboim says, that “Beethoven’s music is for everyone everywhere.” It may be that Boulez’s is too (Dérive 2 was listened to attentively and warmly applauded). Hope so.