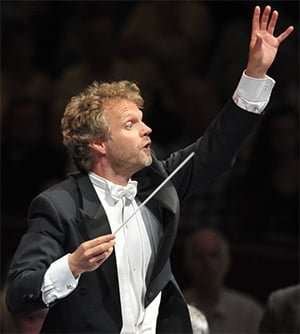 After its exigencies with intergalactic folk at the two Doctor Who concerts, the BBC National Orchestra of Wales returned for its first ‘straight’ Prom (of three) introducing to London its new principal conductor, Thomas Søndergård, although this was not his first Prom – he played percussion under Bernard Haitink in the ECYO’s Bruckner 8, twenty-five seasons ago (27 August 1989 to be exact). So perhaps he conceived this epic and exotic musical excursion with the splendid Royal Albert Hall in mind in which Romantic symphonic statements flanked heady Polish hedonism, in the atmospheric hands of Karol Szymanowski, helping to put centenarian Lutosławski into context.

We opened with Wilhelm Stenhammar’s Excelsior! – a thoroughly Germanic concert overture with nods to Richard Strauss (whom Stenhammar knew) and Wagner, written for a tour by the Berlin Philharmonic to the composer’s native Stockholm in 1896. It shares with Strauss, especially An Alpine Symphony, an upward motif (excelsior indicating “striving upward/onward”), richly worked through, and persuasively played by the BBC’s Welsh team, including the first of a number of exquisite violin solos from leader Lesley Hatfield. 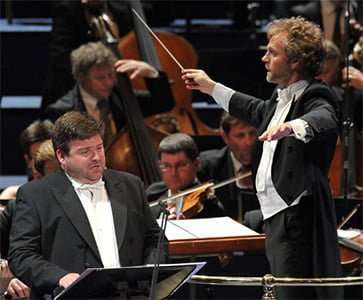 Our other two works were both the product of the pre-First World War years. Both have a spiritual wonder though neither are overtly religious – indeed Strauss even considered calling Alpine Symphony ‘Anti Christ’ in reaction to the stunning news of Mahler’s death in May 1911 – while Szymanowski set sensuous 13th-century Persian lyrics (as filtered through double translation: first to German, and then Polish). The musical equivalent of a heavily scented, hot night, Szymanowski’s opulent score is a world away from Strauss or Stenhammar: one of the reasons that this concert worked so well. Swedish tenor Michael Weinius sang the atmosphere-dripping, heightened text with clear ringing tone, even if Søndergård seemed to only want a generalised vocalise from the combined BBC choirs (not inappropriate for the work, admittedly). But the evocation of an overpowering musical dream was true to the work, aided by the rare and notable heat of our current summer.

What we needed to cool down was served after the interval. Richard Strauss’s An Alpine Symphony is not just a great travelogue but also a spiritual journey, the grandest vista from atop the mountain left to just a solo oboe, as if only here – amidst the effortless majesty of the natural landscape – can humanity comprehend its own insignificance. Søndergård hardly put a foot wrong in fashioning the score for the Royal Albert Hall even if he was a fairly hasty guide (the performance lasted just over 46 minutes). The offstage hunting horns were perhaps too vibrantly loud (but no less thrilling for that), but Søndergård (remember he was a percussionist) is also an expert at balancing cowbells (so enticingly named in German: herdengeläute). He had three stations of them collected into similar pitches; the best cowbells I’ve ever heard. BBC National Orchestra of Wales pulled out all the stops for Søndergård; the partnership has obviously got off to a great start this first season and they’re back at the Proms on 29 July for Colin Matthews’s Turning Point and Shostakovich 11.