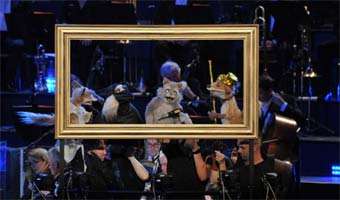 It’s perhaps extraordinary that there has not been a Comedy Prom before. The old-style format of these concerts, with what Thomas Beecham would have called “novelties” inserted even between the movements of symphonies, is perhaps the antecedent – and I did wonder during this hugely enjoyable evening whether we may be witnessing a try-out for a change in style for at least part of future Last Nights.

There is another precursor, Gerard Hoffnung, although his record at the Proms is oddly limited. There was the performance at the 2009 Last Night of Malcolm Arnold’s Grand, Grand Overture (with soloists including David Attenborough, Stephen Hough and Goldie, with both Jirí Bělohlávek and Jennifer Pike on vacuum cleaners), but a quick check on the Proms Archive website elicits no results for Hoffnung himself. Yet his influence did affect the 1958 Proms, just two years after his first, famous Royal Festival Hall concert, as Franz Reizenstein’s Concerto popolare (a clash between Tchaikovsky’s First and Grieg’s piano concertos with interpolations of Rhapsody in Blue other works) appeared in Prom 7 (2 August) that year. That London Symphony Orchestra programme, conducted by Basil Cameron, included favourites by Mendelssohn, Massenet, Delius, Liszt (with Reizenstein as soloist), Bizet, Kodály’s Háry János and Britten’s Prince of the Pagodas. I detail that because David Gutman was not, as usual, able to do so in the printed programme, which went off-piste in a 1.5-times-normal-size sheet, folded, detailing only performers’ biographies. It did come in four designs on the outside – a Routemaster bus, DAB radio, fan or apple – but, aside from the problem of filing with every other uniform programme of the series, this fell short of the usual high standards of Proms production. Admittedly the only ‘established’ piece was the Reizenstein, briefly mentioned in Roger Wright’s introduction, from which we may infer that it may well be the centenary of Reizenstein’s birth (it is, he was born on 7 June 1911, and died on 15 October 1968) that suggested the whole comedy prom idea in the first place. 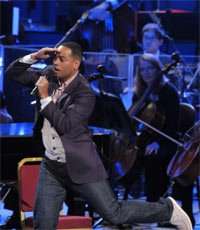 We had to wait until after the interval for Concerto popolare. To start, there was a bearded man in the audience that started singing about “is nothing sacred” that the Proms had gone down-market by introducing comedy. Eventually arriving on the stage the man removed his disguise to reveal Tim Minchin, barefooted Australian comedian, pianist and song-writer. His daft logic equated the name of the Proms to a fizzy drink made from pomegranates and proceeded to compere the evening including examples of his own musical repertoire. Minchin’s lyrics are clever and acerbic, and he’s an eminently assured musician. In the first half we had his lullaby for “the second half of my two kids” mischievously turning to thoughts of infanticide because of parental lack of sleep, while the second included his conflicting musical personalities – hands that play in F major and voice that sings in F sharp – and then reprised his prejudice-song (greeted with cheers), about a word with the following letters – “a couple of Gs, an R and an E, an I and an N” – with relief we find it’s ‘ginger’, with a join-in chorus of “only a ginger can call another ginger ginger.” The finale – after, incongruously, Minchin had donned a Prince Charles mask and played the Doctor Who theme on a keytar (keyed guitar!) – turned to an achingly voiced ballad, introduced with soaring strings, This is my Earth (“it’s where I spend the vast majority of my time”). Its sheer optimism about humanity and our own individual place in the universe, rounded the evening off with a rosy feel-good glow.

In between, Minchin introduced the other acts, which ran more like a comedy show with a musical theme. Doc Brown gave us his rap paean to another great institution David Attenborough before retelling the story of the mother octopus that gives birth to 100,000 eggs and tends them while she starves. I suspect this was verbatim Attenborough, exacerbated by Doc Brown and Jules Buckley conducting the BBC Concert Orchestra in accompaniment. Funnier still was BBC Three’s Mongrels led by Nelson the metrosexual fox, with Sue Perkins conducting, singing Middle Class is Magical which, Nelson argued, was ideal for a Proms audience with accompanying manic live-puppet ‘video’. Similarly mystifying to Radio 3 audiences was the correctly named Boy with Tape on his Face, who mimed a couple embracing (to Chris de Burgh’s Lady in Red) and then re-enacted a two-horse race to the finale of the Overture Rossini’s William Tell overture with the help of an Arena prommer who was dressed with a toilet lid (hung round his neck) for a plunger – Tell’s arrow – to be fired at him. Even better, in the second half’s tutti rendition of Flanders & Swann’s The Hippopotamus Song (Mud Glorious Mud), Sam Willis, gangly and uncoordinated as the great silent-movie stars, returned to mime (ineffectually in very sense) being a timpanist (with sticks, not timpani!). I wonder how many noticed this quiet comic gem while they were lustily aping hippopotami! 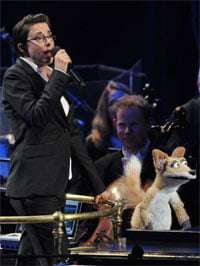 More traditional, in Music Hall vein, were Kit and the Widow (Kit Hesketh-Harvey and Richard Sission) who offered a witty digest of Andrew Lloyd Webber’s classical borrowings for his so-called ‘musicals’ and then equally ribbed Sondheim songs, before Susan Bullock arrived, besequined and (for a soprano) “dressed like a mezzo” in trousers, sang a Sondheim-written song, to music by Mary Rodgers, The Boy from Tacarembo la Tumbe del Fuego Santa Malipas Zatatecas La Junta del Sol y Cruz (who, moves, in the end to Llanfairpwyllgwyngyllgogerychwyrndrobullllandysiliogogogoch). Moving to the end of the first half Kit, the Widow and Bullock got us to sing a “curry” ‘Nessun dorma’ (think ‘Chicken Korma’ and you get the idea!).

The second half started with Andrew Litton (no less – due back soon for a marathon Prom with the Royal Philharmonic) and Proms debutant Danny Driver for the Reizenstein. It is a wonderfully daft hotchpotch of a piece, a miracle of filleting and slapstick that Litton and Driver played to perfection – including a text message from soloist to conductor to enquire when a chord was going to end – leading to a continued disagreement over the exact placing of the final chord. After Litton had stormed off, leader Cynthia Fleming proved her mettle by perfectly conjoining soloist and fellow-players in the final final chord!

Alongside The Hippopotamus Song and a witty piano-duo Dizzy Fingers by Zez Confrey – one keyboard and originally three hands, with Sission’s pair joined by one of Perkins’s, that ended with eight hands on the keyboard (and Minchin lying on top of the Steinway) – there was one final guest. Known as Beardyman (he doesn’t have a beard), Darren Foreman is a beatbox exponent, with an amazing facility to recreate the sounds of an orchestra (and much else besides) in his mouth alone, with the aid of a closely held microphone. Here, through recorded loops, he built up a vocal version of Bach, then sang a G & S-esque patter-song on musical history before jazz. He knocked spots over a previous vocal-artist at the Proms, one Bobby Ferrin (you may remember a really dispiriting, dumbed-down Proms a few years back when Ferrin was hitched embarrassingly with the Vienna Philharmonic). Given the lack of information in the programme I can’t credit the arranger of Tim Minchin’s songs, but I can applaud the hard-working BBC Concert Orchestra. For those that listened on Radio 3, the whole caboodle might make more sense with the visual element, which you can see on BBC Two on 27 August.