The BBC Proms brand works wonders for concerts: it is hard to imagine that Cadogan Hall would have been as full as it was for this Matinee without that P-word. 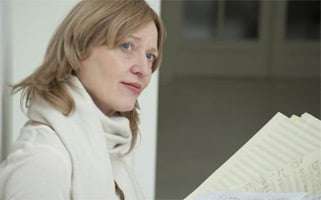 Hildegard von Bingen (c.1098-1179) was a mystic, composer, polymath, and many of her compositions survive, their style and range very different to the monastic chants of the time: they often go beyond her contemporaries’ voice ranges and explore greater melodic ideas. The collection of liturgical songs entitled Symphonia armoniae celestium revelationum (Symphony of the harmony of celestial revelations) date from between 1163 and 1175 (or thereabouts), and use Hildegard’s own texts. In the selection heard here Stevie Wishart had edited and arranged a couple of antiphons and a responsory. She directed her fellow seven singers that form Sinfonye whilst accompanying them on hurdy gurdy, and began rather theatrically by processing down the aisle during the first antiphon, ‘O esterne deus’ (O God eternal). But would the singers not have been male – monks – in Hildegard’s time, though? A distinctive melody is absent, yet the voices are carried where, seemingly, the wind takes them.

For the remainder of the PSM, Robert Hollingworth directed the BBC Singers (with Sinfoyne for Out of this World), beginning with Benjamin Britten’s late Sacred and Profane, which juxtaposes holy thoughts with the every-day. The Singers had the measure of the work’s demanding lines (and its olde English) giving emotive voice to the ideas explored: the many parts in ‘Lenten is come’ were weaved together with aplomb, and there was a sufficiently manic building-up to the realisation of death (‘A Death’) before the great closing line: “Of al this world ne give I it a pese!” (For the whole world I don’t care one jot!), here the singers revelled in its defiant gallows humour.

Sir Harrison Birtwistle’s Narration: A Description of the Passing of a Year (1963) was the composer’s first encounter with the story of the knight Gawain (from Sir Gawain and the Green Knight), a good 25 years before his opera on the subject, and its brief ten minutes does exactly as the title suggests. The Singers wrested plenty of nuance from this thoughtful work. The close returns us to where we began, and made one wonder if anything ever really changes.

The substantial part of the PSM was Stevie Wishart’s setting of three short texts by Hildegard von Bingen, along with the antiphon heard at the start of the concert, ‘O esterne deus’, which Sinfoyne sang from the galleries – in Wishart’s own words, that’s “spacing-within-the-space” performance practice, “separating the horizontals”. The arrangement ably mixed meditative and tender moments, along with more direct and declamatory ideas. The third song (‘O facture dei’ – O creation of God) was particularly effective: its otherworldly, high-placed choir and long lines, developing waves of sound, shining a light everywhere, leaving no shadows. In many parts the music is beautiful, though the closing bars of hisses and breath-noises, despite being novel, did not convince.