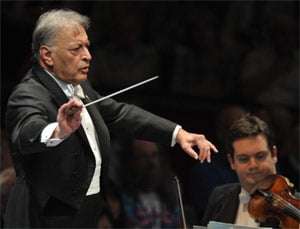 This year brings Bombay-born Zubin Mehta’s 75th-birthday and also marks his fifty-year association with the Israel Philharmonic Orchestra (from eleventh-hour replacement for Eugene Ormandy to Music Director for Life). The IPO is also 75; save it was the Palestine Orchestra for the first twelve years of existence. (The orchestra’s biography as printed in the programme was less than helpful on this point.) Although Mehta and the Israel Phil are always welcome musical visitors to London, this particular choice of music barely limped out of the Proms Prospectus – the same Webern piece that Mehta conducted here two years ago (with the Vienna Philharmonic) followed by the most-ubiquitous of violin concertos (long overdue a rest for all its charms and once again favoured ahead of Max Bruch’s other fiddle concertos and the wonderful Scottish Fantasy), and then some insubstantial Spain-related pieces. Short-measure, too, even by ‘modern’ concerts’ standards, let alone Proms marathons.

Anton Webern’s Passacaglia (1908) – with which he finally acknowledged his musical self – was finely blended and balanced, mysterious and shifting, lyrical entreaties growing to passionate outbursts, all anchored by the antique form … and, then, the first of several disruptions by those who are pro-Palestine/anti-Israel. (Pre-concert there had been a peaceful demonstration outside the Royal Albert Hall; it was dignified and sufficient.) For all the hubbub, this accurate and impressively prepared performance of Webern carried on to its end, if sometimes inaudibly but to an ovation. Those who interrupted had immediately done their cause no favours; indeed it was detrimental. Those who responded as if at a football match trying to get a player red-carded were no better. 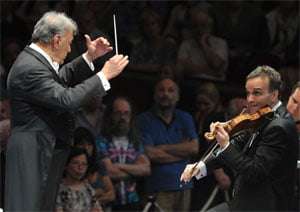 The opening of the Bruch was turned into a false start, drowned-out by continuing hostilities (by now BBC Radio 3 had cut the broadcast). When peace broke out, it was ‘take 2’, and a wonderful performance, Gil Shaham radiant, intense and enthused, Mehta giving a masterclass as an accompanist, the IPO at-one with the soloist and its long-serving, still-vigorous maestro. As an encore, Shaham offered the ‘Preludio’ from J. S. Bach’s E major Partita (BWV1006), athletic, well-tempered and variegated. 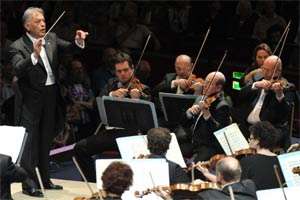 An even longer hiatus before the Albéniz (Radio 3 again cutting loose) from different places in a coordinated campaign – whatever the message, it was lost to others’ annoyance. It was a while before the patient, head-bowed Mehta was able to give us some orchestrated Albéniz; under the circumstances, welcome, sort of evocative and picturesque, but however great the piano originals may be, Enrique Fernández Arbós’s often-garish orchestrations diminish them, despite the sterling advocacy of the performers. Before Rimsky, yet another commotion, and now fists were flying as an irate concert-goer took his frustration out physically on a protester. Both miscreants were ejected (quite rightly) as the other interrupters had been, as was someone in the Arena who unfurled the Israeli flag – how did he get that through the increased security? (I even had my Evening Standard inspected!) There were supposed to be in-depth bag searches, but of course you can’t stop anyone getting in who has no baggage and who has come to shout.

Iberia may be nearer the real thing than Rimsky-Korsakov’s Capriccio espagnol (although a travelling naval captain, Rimsky never saw Spain for himself), but it’s a masterpiece of how to use an orchestra subtly, suggestively and vibrantly without coarseness. Mehta and his musicians brought it off brilliantly; silky strings, personable woodwinds, bright but not blatant brass, and crisp unforced percussion (less-loud than in Arbós’s over-scored mêlée), and with some notable solos from violin, flute, clarinet and harp (the IPO’s musicians were not listed by name). Mehta could though have sprinted more to the finishing post, and the encore – ‘Death of Tybalt’ from Prokofiev’s Romeo and Juliet – needed to live more dangerously. Only one extra, atypical Mehta, but in-keeping with the weeks-old feeling that this concert didn’t do these visitors full justice. But that was before the unwanted and unwarranted stoppages, for ultimately the Israel Philharmonic and Zubin Mehta were vindicated to deserved acclamation … for it was the music that won … and those who came to object and those who responded in loud-mouth fashion lost. And Radio 3 listeners were mostly spared listening to this war-like situation and got the same works as recordings.